The first German submarine operations on U.S. waters took place not in World War II, but during World War I. With responsibility to guard the coast, the U.S. Coast Guard had several encounters with these early U-boat attacks, including those of U-156. Armed with 18 torpedoes, four deck guns and a supply of underwater mines, U-156 began its campaign against East Coast shipping in June 1918. During this cruise, the crew sank nearly 35 vessels including the armored cruiser USS San Diego, which was sunk by one of its mines on July 19 with the loss of six lives. 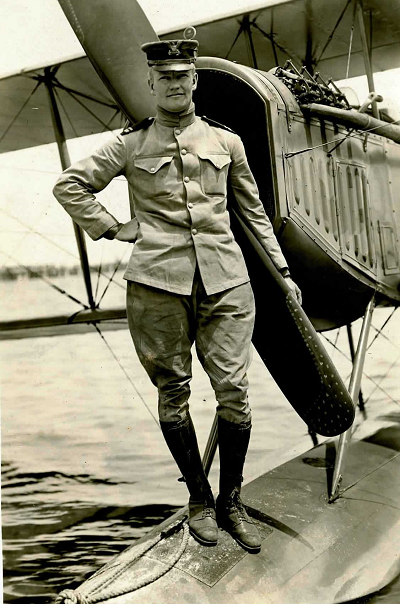 Second Lt. Philip Eaton photographed at the U.S. Navy’s flight training school in Pensacola, Florida. (Courtesy of the Coast Guard Aviation Association)The Coast Guard and its aviators played a vital role in the World War I war effort. In 1916, Congress authorized the Coast Guard to develop an aviation branch, including aircraft, air stations and pilots. Coast Guard officers began to train at the Navy’s Pensacola Naval Flight School. Lt. Philip Bentley Eaton was one of these officers.

Eaton’s early passion had focused on engineering and technology. He matriculated from the prestigious Webb Academy of Naval Architecture. After graduating from Webb in 1907, Eaton received an appointment as a cadet engineer in the Revenue Cutter Service School of Instruction, graduating with the class of 1908. Over the next six years, he saw service aboard cutters stationed in Baltimore, New York, Milwaukee, New London, Conn., San Juan, and Port Townsend, Wash. In 1915, Eaton was assigned to the Coast Guard Cutter Bear and served there for two years before departing in 1917 for flight training at Pensacola.

On April 6, 1917, the U.S. declared war on Germany and the Coast Guard was transferred from the Treasury Department to the U.S. Navy. After earning his wings as a naval aviator in October, the Navy assigned Eaton as executive officer of Naval Air Station Montauk (Long Island), New York, and eight months later received command of Naval Air Station Chatham on Cape Cod. Chatham supported two dirigibles and seven seaplanes with a complement of 245 officers and men. After two weeks on the job, Eaton received a field promotion, rising from second lieutenant to captain of engineers, the equivalent of the Navy’s rank of lieutenant commander.

Late in the morning on Sunday, July 21, U-156 emerged from the hazy waters of Cape Cod to prey on American coastal shipping. The U-boat crew located the towboat Perth Amboy and four wooden barges lined up in a towline. Rather than waste precious torpedoes on the slow-moving Perth Amboy and its consorts, U-156’s commander ordered his crew to shell the vessel and its barges with deck guns. Some of the long shots landed on Nauset Beach, the first foreign cannon fire to hit U.S. shores since the War of 1812 and the only enemy shells to hit American soil during World War I.