WASHINGTON, DC — The U.S. World War I Centennial Commission has elected a new Chair for the organization. The election took place during the Commission's quarterly meeting on September 13th, in Washington, DC. 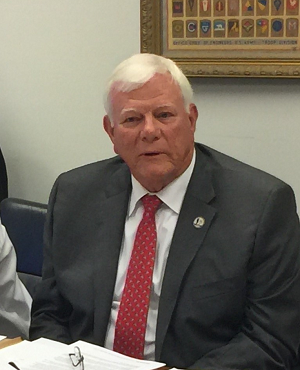 "This is a huge honor for me", Chair Hamby said, in his acceptance. "Both my father, and my great uncle served in World War I. My great uncle was lost in the Battle of the Meuse Argonne. I will put my whole heart into this job."

Chair Dalessandro expressed his support for his successor. "Terry Hamby is an excellent choice to be the Commission Chair. He is a leader, he is a veteran, and he is expert in the ways of getting things done."

The U.S. World War I Centennial Commission was created by an Act of Congress in 2013. Members of the 12-member Commission are appointed by the President and the leaders of the Senate and the House of Representatives, as well as the American Legion, the Veterans of Foreign Wars, and the National World War I Museum. All five living former Presidents have agreed to serve the Commission as Honorary Chairs.

The Commission’s mission is to plan, develop, and execute programs, projects and activities to commemorate the Centennial of World War I to mark American service and sacrifice in the war, via public outreach, education programs, and commemorative events. The Centennial Commission is funded by private donations; the Founding Sponsor is the Pritzker Military Museum and Library in Chicago, IL.

Chair Dalessandro led the organization during a very productive time in its history, to include the development of the new National World War I Memorial in Washington DC, the creation of numerous education programs, and public-outreach initiatives. His tenure was marked by successful partnerships with organizations across a wide spectrum, to include the Government of France, the HISTORY Channel, the U.S. Department of Defense, and the Coca Cola Foundation.

Chair Hamby was appointed to the Centennial Commission by Senate Majority Leader Mitch McConnell (R-KY). He is a Viet Nam veteran, serving in the Naval Air Wing during the conflict. After discharge he joined the US Army Reserves, retiring with 26 years of service in 1993.