By Jim Finnegan
via The Columbia Missourian web site

The “Doughboy” statue that has stood in front of Wentworth Military Academy since 1923, commemorating the sacrifice of Wentworth cadets in World War I, is at the center of a legal debate pitting alumni against the school they once called home. 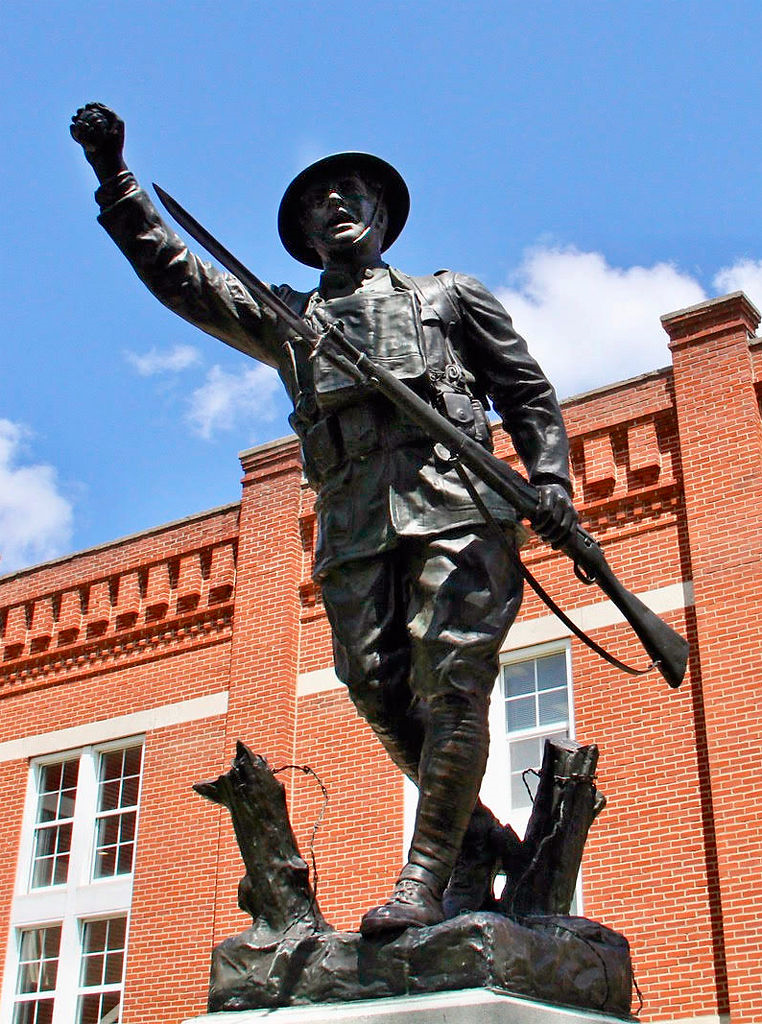 A statue erected in honor of fallen soldiers during World War I, including Wentworth cadets, stands outside Wentworth Military Academy. (Photo courtesy of attorney Jennifer Kerr)Financial troubles forced Wentworth, in Lexington, Missouri, about 50 miles east of Kansas City, to close its doors at the end of the 2016-2017 academic year. Bank Midwest holds liens on the school and its property, including memorabilia like old uniforms, badges, photographs — and the doughboy statue, by the American sculptor Ernest Moore Viquesney, one of 139 made.

On Oct. 7, the property is to be sold at auction in Lexington by Oldham Auctions to help pay off the school’s debts to the bank.

The Wentworth Military Academy Alumni Association filed a petition in Lafayette County Circuit Court on Aug. seeking a temporary restraining order to stop the sale of the doughboy, claiming that the alumni, not the school, are its rightful owners.

“The doughboy was dedicated, it was never donated or gifted,” said George Hittner, a Wentworth alumnus who is now the attorney for the alumni association, the plaintiff in the case.

In 1880, Stephen G. Wentworth, a banker from Lexington, founded Wentworth Male Academy after the death of his son. During the 1881-82 school year, the idea of operating the school as a military academy was sparked when an associate principal saw a student marching a group of other boys around, armed with broomsticks, according to the school’s 1963 nomination form for the National Register of Historic Places. The assistant principal proposed holding military classes “and offered to buy guns if the students would buy uniforms.” The uniforms and the guns — Austrian muskets — were ordered, and in 1890 Wentworth Male became Wentworth Military.

At the beginning of World War I, Wentworth saw its enrollments increase dramatically, and many students left to train as officers. The names of the 14 Wentworth cadets who died in the war are inscribed on the doughboy statue, which was brought to campus in 1922 and dedicated during graduation commencement ceremonies on June 10, 1923. Since then, tradition held that first-semester cadets were to salute the statue from about 12 feet away and were to never walk behind it.

The origin of the term “doughboy” is still in contention. It could be an allusion to the shape of buttons on the uniforms of U.S. infantrymen, the appearance of soldiers marching through dusty terrain in the Mexican-American war, or a fried pastry that was the predecessor of the doughnut. Nonetheless, the term stuck and is generally used to refer to American infantrymen in World War I.

Jim Sellers, one of the alumni fighting to return possession of the Doughboy to the alumni association, is the great-great grandson of the school’s founder, Stephen Wentworth.

“The alumni of Wentworth have always been interested in maintaining and preserving the memory of our fellow ‘Old Boys,’ as we have historically been known, who gave the ultimate sacrifice in protecting American interests and democracy abroad and at home,” Sellers said.

Read the entire article on the Missourian web site here.