By Patrick Gregory
via the centenarynews.com web site

The design for America’s proposed new National World War I Memorial in Washington DC has reached another key stage thanks to an innovative collaboration between the memorial’s sculptor and computer artists in New Zealand. Sabin Howard, the leading classical sculptor, has taken designs for the memorial from his studio in New York to Wellington to work with leading 3-D modelling specialists. He’s been talking to Patrick Gregory. 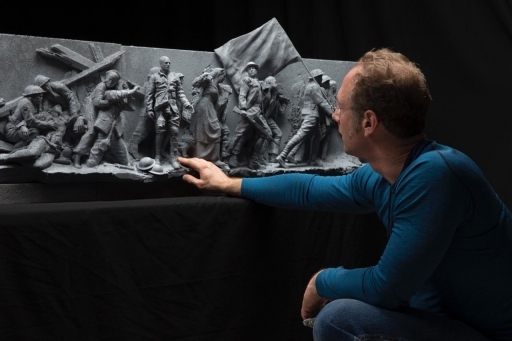 Sabin Howard with his new working model of 'A Soldier's Journey', developed in partnership with digital modellers, Weta Workshop, in Wellington, New Zealand (Image © Weta Workshop/US World War I Centennial Commission)It's over 18 months since the WWI Centennial Commission chose Sabin Howard and architect Joe Weishaar’s design for the new national memorial in Washington, but it has been time busily spent taking the original concept through a number of different design stages. For sculptor Howard that has meant 60-hour weeks in his Bronx studio while discussing and developing the various iterations of his ideas through a detailed committee process; and now he has a new set of partners on the other side of the world. All are helping shape the final design.

Howard's focus has been on the wall of remembrance which will be set in the middle of what is to be a newly-configured Pershing Park, off the National Mall in the capital, not far from the White House. In particular, the centrepiece of that wall, a 65-foot bronze bas-relief.

Entitled A Soldier's Journey, the layout and figurative design of the sculpture has been put together very deliberately and with great precision. It is, explains Howard, constructed in a geometric and mathematically precise manner, but he hopes it manages to achieve something which is "not esoteric and classical but more expressive and emotional".

For that he has developed a 38-figure composition which flows from left to right, moving across the length of the relief, characters overlapping, straining, toiling on the way. The composition seeks to tell different stories within one framework. The main narrative is a two-in-one affair: a soldier’s journey through the Great War as he leaves his family to go to the front, charting his battles there and his ultimate return home; the second is of America’s journey in the war. Together the two form an allegory: the soldier’s personal war representing America’s journey and its coming of age through the conflict.