Prohibition and World War I

The global impact of the Great War reverberated throughout world history. Millions of lives were changed in four years, putting nations on radically different paths. In the United States, the war fundamentally shifted how the nation viewed itself in global affairs and how it behaved at home. As industries and the federal government prepared for conflict, a social movement that brewed for nearly eighty years saw the golden opportunity to achieve its ultimate goal: the national prohibition of alcohol. 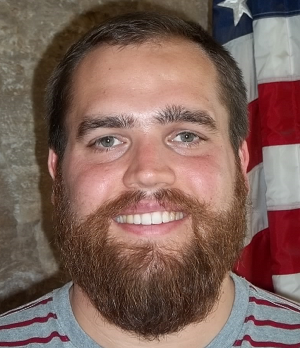 Thomas Richardson The 18th Amendment was ratified and Prohibition began in January 1919 following the armistice. Dry forces advocated for decades to limit the consumption of alcohol. Temperance was practiced at first; simply regulating and restricting the amount one could drink. The Women’s Christian Temperance Union (WCTU) advocated heavily throughout the late 19th century on these issues, while simultaneously addressing other reforms. The WCTU quickly established themselves as the leader of progressive causes, but the single issue of alcohol was taken up by another organization: the Anti-Saloon League (ASL). The ASL engaged in large-scale lobbying that called for the total prohibition of alcohol and set the path for a constitutional amendment. Alcohol, they believed, was a moral scourge upon families, causing poverty, and criminal figures operating from saloons fostered public corruption.

The Great War itself wasn’t the only contributing factor to the amendment’s passage, but instead it was the culmination of decades of work carried out by temperance and progressive groups.

Large breweries looked to secure their essential economic role through lobbying and political groups, such as the United States Brewers Association and the German-American Alliance. The wets, opponents of prohibition, staved off alcohol restrictions through their lobbying and commercial interests. Wet leaders like Adolphus Busch embarked on massive public relations campaigns showing the essential role the alcohol industry played in the American economy. Federal tax revenue depended heavily on alcohol sales, but that changed drastically in 1913 following passage of the 16th Amendment implementing an income tax. No longer was the government reliant on alcohol excise taxes, which gave progressive advocates much needed support for prohibition. 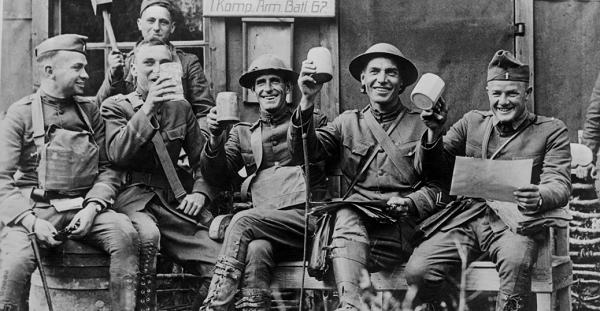 The news from home was sobering...The final blow for the wet camp came in 1916 with the escalation of hostilities between the U.S. and Germany. President Wilson relied heavily on dry politicians in order to pass critical wartime legislation, such as raising taxes, federalizing industries, and expanding the armed forces. For the most part, President Wilson tended to abstain from the prohibition argument himself, but many of his new laws, including the War Revenue and Lever Food and Fuel Control Acts directly benefited the drys that saw the legislation hurting the wets. The ASL argued that breweries also diverted precious grains away from European markets that needed to feed armies. Food was critical and when people were asked to give up meat and wheat on certain days by Herbert Hoover’s Food Administration, the production of beer was seen as a waste (even though brewers claimed they only used a miniscule fraction of grain for brewing beer).

By 1917, unrestricted submarine warfare was taking its toll on U.S. shipping. As the war dragged on, anti-German sentiment grew, fueling resentments against wets now seen as synonymous with Germans. Wayne Wheeler, chief strategist for the ASL, began probing Congress to investigate organizations with ties to the Central Powers; specifically focusing on the German-American Alliance and the Brewers Association. Senators found that the GAA received substantial funding from the USBA in order to keep wet interests strong and afford them a degree of leniency when it came to wartime exemptions. This paled in comparison to what Wayne Wheeler relayed back to the ASL; that the Busch family still had relatives in Germany, held German war bonds, and even reportedly cared for wounded German soldiers. 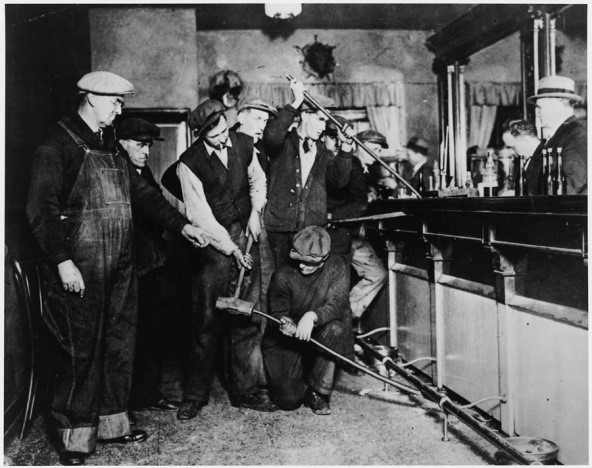 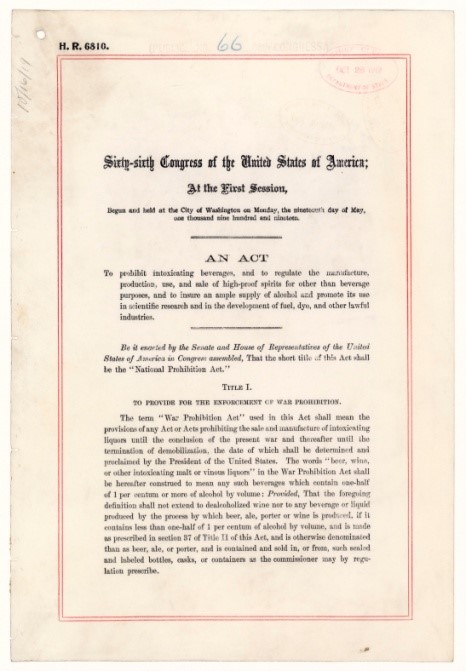 ‘National Prohibition Act [Volstead Act]’ Office of the Federal Register, Enrolled Acts and Resolutions of Congress, 66th Congress of the United States, October 28, 1919. NARA. The Volstead Act defined language and set enforcement regulations for the 18th Amendment. All of this fed into the anti-German hysteria the drys used to galvanize support for prohibition. The Committee on Public Information embarked on propaganda campaigns aimed at demonizing Germans and targeting German influence in the country; most obvious being the brewers. Brewing dynasties like Busch and Pabst re-branded their images to support American involvement; removing references to Germany, buying liberty bonds, and encouraging family and workers to enlist. Despite their best efforts, the ASL had the political and public momentum to initiate their plan.

This was the perfect moment for the drys to enact prohibition legislation. Congress had already passed the Wartime Prohibition Act in 1918 restricting grain supplies to breweries, but now total prohibition enshrined as a constitutional amendment became a reality. Following the 18th Amendment was the National Prohibition Act which set enforcement laws for the new amendment. Even with President Wilson’s veto, it was overridden by Congress and national prohibition enforcement would begin in January 1920.

In mid-1919, as U.S. soldiers began returning from France, they faced a sobering reality; after January 17, 1920, they could no longer buy, sell, manufacture, or transport alcohol. Well, not legally at least.