An amazing group of people in France have been working on an amazing project to remember the American troops who helped France 100 years ago. Calling themselves Trains and Traction, they are railway enthusiasts who have spent countless hours restoring an original American Army World War I-era railway boxcar, for eventual display & exhibit. The rail car was left behind in France, and was a ruin when discovered by the group a few years ago. Olivier Jaubert is the Director of Heritage for the Trains and Traction Foundation, and he told us about his team, and what they have done.

Olivier, Tell us about your railcar project. This is an amazing and unique way of remembering the people who served in the war. Who had the idea?

The idea came from inside, as these 37000 wagons, sent completely kick-down from US, were locally assembled in La Rochelle by US soldiers from the 35th Engineers in what is now today ALSTOM, the biggest local factory with over 2.000 workers, building TGVs and tramcars. 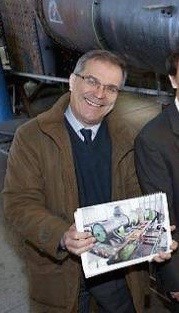 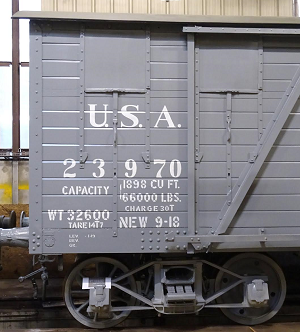 Restored American railcar from World War I.The 35th Engineers guys worked from the end of 1917 to the 31st of March 1919, assembling 17.000 units. Then an American company, the Middletown Car Co., assembled the 20,000 remaining ones.

How did the restoration project get started?

These US wagons have a specific look: any boy who had an electric train to play with had one in his rake.

So when we had the opportunity to buy one for one € plus transport, we bought it. It was six or seven years ago, and this railcar was already derelict, but also already listed as a French Historical Monument since 1990. This listing means that National and local authorities can pay up to 60% of refurbishment costs, which gives ideas to the ones who can find the remaining 40%.

As they were 8 different types of these wagons, from boxcars (two types), flat, tank, to high and low gondolas, etc…, all built with same sub-components, and as they had all been locally assembled, we started collecting one of each of the only six remaining types and filled the files to get money. It seems simple. It is not.

Now two railcars are almost finished, the third “started”, and files filled to get money for the remaining ones: we plan to be ready to show the full rake of six units for your 2018’s Independence Day. The steam locomotive, we have: let’s just find reenacting groups, Ford American Legion ambulances, Liberty trucks, Nash-Quad and Macks of the time, and that’s it!

Remind us of the symbolism of these particular 8/40 rail cars. What role did they serve during the war? What information will people see on the education panels?

In fact your cars were bigger, and as you may have seen, you US, didn’t painted on these cars ‘sides how many horses and men there were able to transport: 12/60?

Today in France, as it seems also to have been organized in USA in the thirties by your late president Roosevelt, local authorities have training schools to put back in work long time unemployed persons. To train their people, these “schools” need to build things, but are not allowed to compete against private companies. They can only work for cities and non-profit associations. We succeeded to benefit of their work: so is public money not only used to help people, but also to save “Historic Monuments”. We volunteers only take care of the railway sides of the job, like refurbishing brakes, axles, wheels, couplings and car’s markings.

Before, we also took in charge all the historical research, also done by very competent volunteers (I am not one of them…). 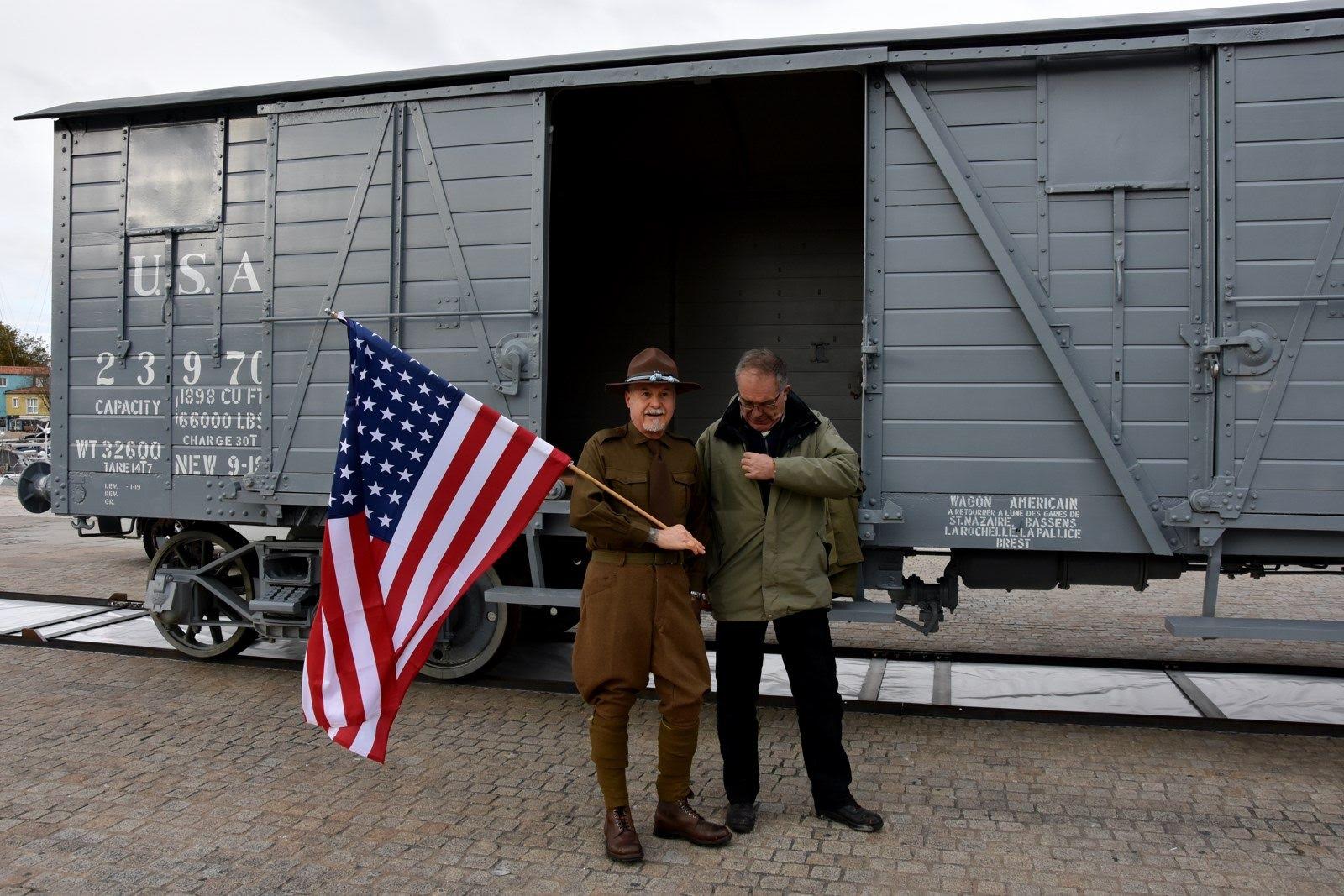 The finished car arrives in La Rochelle, France for exhibit.You have a Consul, here, in Bordeaux, who is in charge of the world’s oldest US diplomatic office outside USA, as it was founded by Benjamin Franklin when France still had a king and you were still at war against the British.

This Consul, apparently, has to push US culture and reputation in our country. So he was very pleased, and us too, to help us: it is why, if on top of our panels, you will find your own logo, the one of your Embassy is also appearing.

You will see what is written on the panels: this is a translation, as we plan to print them also in English, and to place them aside our cars, with US and French flags. Please feel free to help us regarding translation’s quality: English is not my mother tongue

Regarding restoration, there is a group of rail fans interested by Railway history in France before 1938, the year the national French railway (SNCF) was founded by merging all the former private companies together. They have a newspaper, called “Rails d’Autrefois”, and a website under that name. They have very strong members regarding French Rail history.

They are publishing a 126 pages book all about the subject, with plenty of Signal Corp and other photos, and an English translation is planned: it is said that I will have mine, in French, within days.

Regarding unexpected things, sorry, none come in mind, as we are very pushy and a little organized: hope not to have “shocked” you!

People in America will be thrilled to see this project, and to hear of what you have done. What would you want to tell them?

“Lafayette, here we are! » said by one of your officers on Lafayette’s grave in 1917 in Paris will never be forgotten.

We have to do what we do, as you, your Doughboys in WW1 and your G.I. during WW2 have done your part. They can be lows and highs between our two countries: no matter, we build together and go ahead! 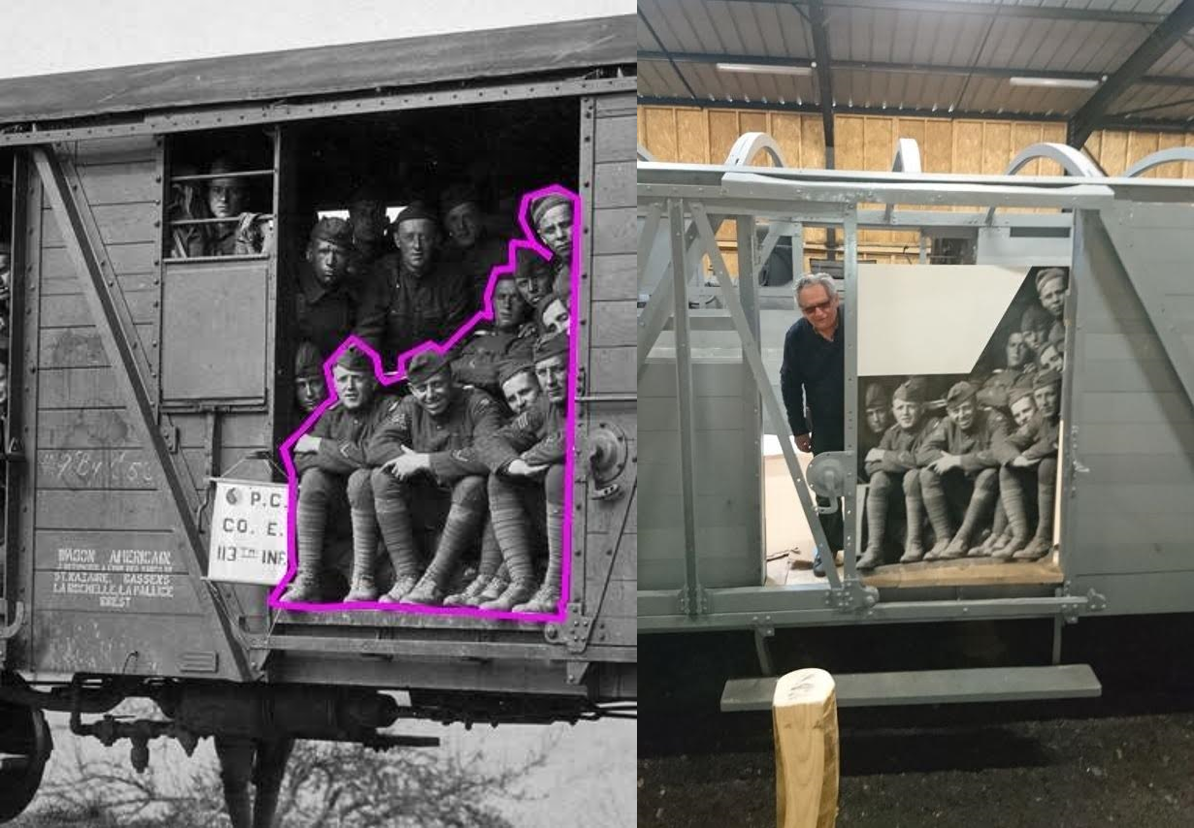 The process of developing the picture insert for the railcar door exhibit.