A Soldier’s Journey – The Classic Monomyth

By Sabin Howard
via sabinhowardsculpture.blogspot.com/

And in so doing create a WWI Monument honoring the men and women that went through this horrific moment in global history? 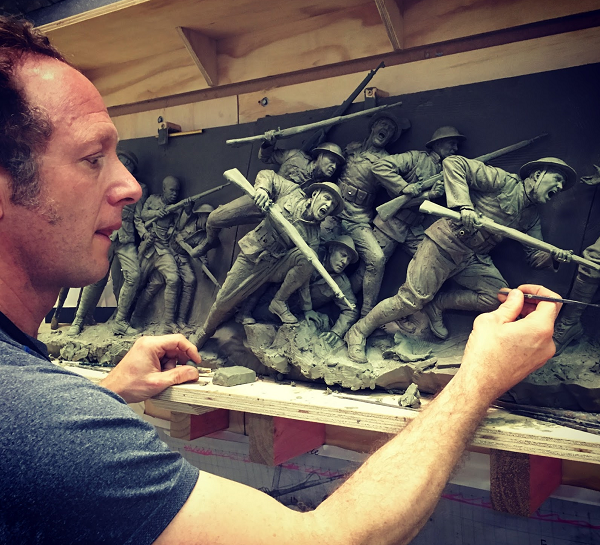 Sculptor Sabin Howard working the small-scale maquette for the new National World War I Memorial at Pershing Park in Washington, DC.Well, now I'm on the other side of that in terms of the storytelling for the nine-inch sculpture maquette. What WWI looked like is told through a visual narrative called A Soldier’s Journey. It is a story of a soldier and father, who departs from home and family, traveling to the distant shores of Europe, experiencing the horrors of war, only to return home again, forever changed.

35 years ago, when I began learning the craft of making art, I was always taught to work from general to specific. And that lesson became my mantra as I proceeded in this incredibly complex design.

It took nine iterations over twelve months, with 12,000 pictures taken of re-enactors in my Bronx studio to create a story of transformation and change that would explain this war to the Memorial visitor. The strangest part of this process is that I was unaware as I assembled the scenes and drew out the final drawing that I was working in the template of what Joseph Campbell calls a ‘monomyth’. It has also been referred to as the hero's journey.

It is only recently that my wife, Traci Slatton, an internationally published author and a gifted storyteller, looked over at me at 6am one morning over breakfast and said, “You know that Soldier’s Journey that you are doing is right out of the template that has existed for ages in many different cultures of myth.”

Joe Weishaar, my designer partner, had said to me back in the fall of 2015, “Create a beginning, a middle, and an end." But I was completely unaware that what I was doing visually fit an age-old way of telling stories.

Traci continued and filled me in. “You ought to read up on this. Joseph Campbell refers to it as ‘mankind's one great story.’ This structure of narrative involves a hero who goes on an adventure, and in a decisive crisis wins a victory (just to name a few, it is found in Native American culture, Greco-Roman culture, and Judeo-Christian culture.) The protagonist then comes home changed or transformed and wiser by his passage through this perilous task.” My wife has always been very instrumental in helping me find the right track for the story in my art. When you live with somebody that's gone to Yale and Columbia, there is bound to be an intellectual conversation at the breakfast table! Picking up one of Joseph Campbell's books on the dining room table, she filled me in on the road that I had taken. It was a little shocking to realize that somehow I had downloaded a storytelling template that had existed for ages in many different cultures to explain the story of WWI.