Why the Christmas Truce endures in historical memory

Five months of hard fighting during the 1914 ‘Race to the Sea’ quickly transformed into a harsh, no-man’s land where entire divisions became casualties. Christmas 1914 saw something extraordinary though; companies of British, French, German, and Belgian soldiers along the front held unofficial ceasefires in their respective sectors. The short reprieve consisted of soldiers exchanging gifts, burying dead comrades, and hosting an impromptu football match. A handful of firsthand accounts record the truces along the Western Front, capturing the moments of calm, miraculous relief. Captain Edward Hulse of the Scots Guards claimed it was ‘the most extraordinary Christmas…you could possibly imagine.’ 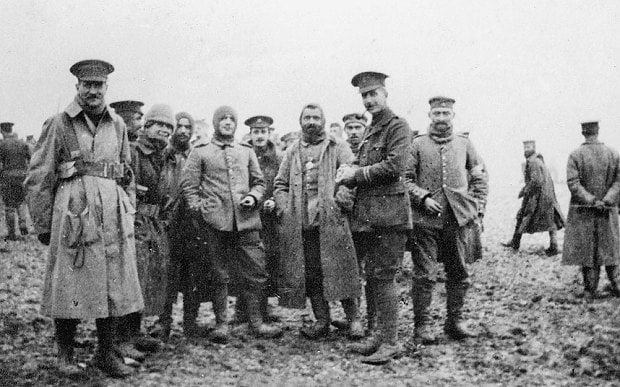 British and German Soldiers mingle during the Christmas Truce in 1914.News of the truce spread haphazardly in Europe; French and German newspapers heavily censored the ceasefires, but stories were shared by soldiers in letters home. Despite suppression, the historical memory of the Christmas truce lives on and in light of the war’s centennial, examining its role within the larger memory of World War I is paramount. In four years of war, a brief aside from the death provided a symbol of hope.

Contemporary public reaction to the Christmas truce in 1914 was counter to the hateful propaganda demonizing enemies. British newspapers like The Times and Daily Mirror printed letters from soldiers involved with the truce, showing the positive, upbeat character, and fraternization, they shared with the enemy. Soldiers described it as ‘one of the greatest surprises of a surprising war’ and ‘absolutely astounding’ in their correspondence, but that sentiment was not shared by their superiors. Generals and senior staff expressly forbade any type of communication between opponents. Any contact was interpreted as fraternization, establishing grounds for treason charges.

Despite these directives, the proximity between soldiers and trenches made fraternization a regular feature of the Western Front. These men lived, fought, and died in the trenches beside one another, making the war a deeply personal matter. Senior staff unable to witness this interaction firsthand would have a markedly different view on how their soldiers fraternized with the enemy. Because of the subversive nature that commanding officers might interpret the truce, French and German soldiers were likely discouraged from revealing their involvement. Statistically, many of the soldiers who did participate in the truce were likely killed in later months, like Captain Hulse at Neuve-Chapelle. They understood that the realities of war still existed and would resume after Christmas.

What survived were stories shared by fellow soldiers. Oral histories and letters entered the public memory, becoming part of the larger historical rhetoric. Press censorship covering the war would have suppressed it from reaching a wider circulation more than likely. The stories that did reach the public though illustrated that despite such carnage, small moments of hope illuminated the otherwise dark stain of warfare.

As years go by and the historiography of World War I expands, questions about the war’s purpose and nature are thoroughly examined. A common theme that emerged was why the war was even fought when they account for its numerous causes. World War I’s placement in the broader context of global social, military, and political history provides unique insight into its historical memory. Public memory about the war centers on its ferocity, trench warfare, and the introduction of modern warfare. The industrial scale destruction was unheard of even in 1914 and consequences are still visible today.

Accompanying all this, why does an event like the Christmas truce endure? The accuracy of the truce is still scrutinized by historians, but the memory of the truce itself perpetuates the longing hope that soldiers held whilst facing certain death. The public remembers the Christmas truce not only for the romantic image of soldiers coming together as brothers exchanging gifts, but the realization that this was a reconciliation. Reconciliation not only for their actions, but for their nations because if the soldiers could lay down their arms willingly, then nations could find alternatives to their troubles.

Popular portrayals of the truce, such as the 2005 film ‘Joyeux Noel’, present a dramatized insight into what could have transpired on the front, while maintaining the central theme that reconciliation is more powerful than artillery and bloodshed. The memory of the Christmas truce endures for the factual accounts and the broader message of hope for both nations and soldiers dying in the trenches.

The popular notion of ‘the war will be over by Christmas’ has carried throughout numerous wars; people anticipating that the violence ends and anxiously await their loved ones’ return. In a way though, the Great War did end on Christmas in 1914, even if for a few hours.