The Brave Animals That Helped Win World War I

By Jennifer Nalewicki
via the Smithsonian.com web site 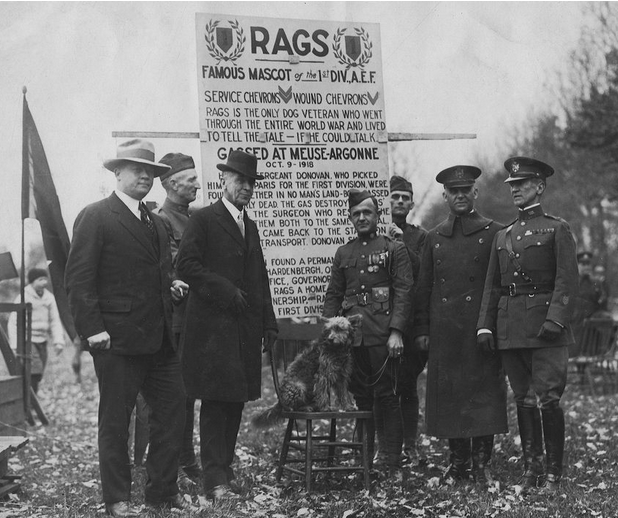 Rags' friends stand in front of a sign commemorating him for his bravery in battle.Rags was as brave and hardworking as the American soldiers he fought alongside during World War I. But one key detail set him apart from the men serving in the First Division American Expeditionary Forces: He was a dog.

The stray dog turned soldier was just one of the estimated millions of dogs, horses, camels and other animals that served during the Great War. Often referred to as “military mascots,” these beasts of burden typically acted as soldiers’ companions, boosting morale when times got rough for soldiers living thousands of miles away from home.

But military mascots didn’t just lend a supportive paw: They did real work on the battlefield. Thanks to their speed, strength or agility (depending on the species), they’d take on important tasks like lugging munitions and other cargo, carrying crucial messages between units and sniffing out buried mines. But many of these animals never received any recognition for their hard work and dedication, and their short lives were largely forgotten—until now.

Recently, the National Archives completed a massive scanning project, digitizing 63,000 World War I photos for its American Unofficial Collection of World War Photographs (165-WW) record series. The extensive collection, which took two years to get online, contains images obtained from the U.S. Army Signal Corps, various federal and state government agencies and the American Red Cross. While a majority of the collection contains images of soldiers participating in various stages of military life, from training for battle to engaging in active warfare, archivists noticed something else in the photos: animals.

“I’m an animal lover,” says Kristin DeAnfrasio, an archivist who worked on the project. “As I was going through the photos, I kept seeing unique animals, like a raccoon, an alligator and a bear, that stood out to me.”

Upon further research, DeAnfrasio learned that many of the animals captured in black and white served as military mascots. (She wrote a post on the subject for the archives’ Unwritten Record blog.)

Not much is known about the animals in the collection beyond the typewritten captions that accompany each photo. But they provide rare insight into an aspect of the war that often gets left out of the history books. Animals have often served on the battlefield—the Assyrians and Babylonians were some of the first groups to recruit dogs for war purposes. Closer to home, animals were a part of the Civil War, sniffing out wounded soldiers and responding to bugle calls. However, their role is often underappreciated or unknown.

Read the whole article on the Smithsonian.com web site: