The landmark art exhibit World War I and American Art will close out its current run at Nashville's Frist Center on 21 January. This ambitious show was originally organized by the Pennsylvania Academy of the Fine Arts (PAFA), Philadelphia, and it was timed to coincide with the centennial of the entry of the U.S. into the war, It was previously shown at the PAFA, in Philadelphia, and at the New York Historical Society Museum, and garnered acclaim from news outlets such as Forbes, The New York Times, and PBS NewsHour. The show was set up at the Frist in August of last year. The exhibit revisits a critical period in history through a wide variety of artistic responses, ranging from patriotic to dissenting. The artworks show an incredible range, and include painting work by Georgia O'Keefe, who lost a brother in the war; photography by Edward Steichen, who flew aerial reconnaissance missions with the Army Air Corps; and masterwork painting "Gassed", by John Singer Sargent, which is on loan from the Imperial War Museum in the UK. We reached out to the staff of the Frist Center, to discuss the exhibition. Frist Center Curator Trinita Kennedy, Director of Education and Community Engagement Anne Henderson, and Director of Communications Ellen Pryor, responded to our questions about the show, about the war, and about impact on the local region.

How was the setup process for you folks? The Frist is a world-class institution -- but this exhibit is a bit unique -- with artwork and artifacts, etc. i.e. What special handling was needed for the huge John Singer Sargeant Gassed painting?

(l to r) Trinita Kennedy, Anne Henderson, and Ellen Pryor of the Frist Museum.The exhibition includes 140 works in many different media. The installation period was about 10 days.

Yes, the hardest work to install was Sargent’s Gassed. It was intended to be permanently installed in a Hall of Remembrance in London. It is only because that monument was never constructed that the picture is able to travel. The painting measures 90½ x 240 inches and therefore is challenging to move. It is too large for most freight elevators in art museums, including ours.

The picture traveled here in a crate with a special travel frame. It was then re-framed in its usual frame in our galleries. The travel frame was slightly smaller, and that difference made it possible for the picture to fit in our elevator.

As you can see in our video, a large crew was required for the unpacking and installation. The process took about five hours. The painting has traveled to the United States only once before, in 1999, when it was part of a Sargent exhibition in Washington and Boston.

How has the show been going? What have the reactions been from your audiences? Do people make comment, talk about their family stories, etc.?

The exhibition is being wonderfully received with people coming from around the region and around the country. We’ve been particularly gratified at the response from our military community in Middle Tennessee, southern Kentucky and North Alabama. We’re honored to work with a number of organizations that serve veterans and military families and pleased at the number of veterans who are visiting.

Yes, we are hearing quite a few family stories…stories of grandparents and great grandparents who served in the war. Debra Priestly, a contemporary artist represented in the exhibition, created a masterful work based on a family photograph. I met a woman at our opening who is acquainted with a 104-year-old widow of a WWI veteran and wanted to tell her story.

We have been supported in so many ways by Dr. Michael Birdwell and the members of the Tennessee Great War Commission and the WWI Detachment of the Tennessee State Parks Department headed by Jeff Wells. The park ranger Doughboys, historic reenactors from across the state, have been welcomed to the Frist Museum as “guests from another era” to exhibition-related events and have truly brought the exhibition to life for our members and visitors. One of the Doughboys met Debra Priestly, and we were able to capture their conversation about Debra’s family connection to the war.

One of our docents sent this email: “I have given three adult tours of the World War I exhibition. In all three of the tours the reaction was the same. The visitors where overwhelmed! Overwhelmed to the point of tears! One woman had difficulty containing herself. The paintings and the story are very powerful. I never expected to have the same reaction, on my second and third tour. Not just tears, but the look of anguish, and sorrow displayed on their faces. No one left, or walked away, they all wanted to see more. They had many questions. ‘Why did we not know this? Why did we not learn about this in school?’ I heard that many times.”

Tell us about the public programs that you scheduled to go along with the exhibit.

In collaboration with local organizations, including Fisk, Vanderbilt, and Tennessee State Universities and the Country Music Hall of Fame’s Hatch Show Print shop educators developed an array of exhibition programs. 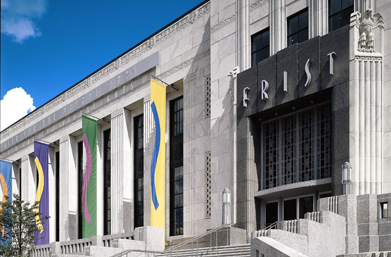 The Frist Center in NashvilleOpening lectures included Richard Ormond, Commander of the British Empire, who examined John Singer Sargent’s engagement as an official war artist during WWI and David M. Lubin, co-curator, who discussed the efforts of sculptors who worked on prosthetic masks for disfigured soldiers.

Food for Thought panel discussions explored the ways the war changed the world, the role of African Americans, and developments in medicine; a lecture concert by music historian Michael Lasser presented the music of WWI; educator workshops, tours, and audio guides explored the themes of the exhibition in greater detail; three studio workshops examined various artistic mediums including the historic Vandyke Brown photography printing, a painting workshop that looked at abstract responses to WWI and offered participants a chance to create their own abstract responses, and a printing workshop that explored the power of posters to inspire, promote and persuade.

U.S. military veterans from Writer Corps, an organization that encourages veterans to tell their stories through the written word, presented in-gallery readings against the backdrop of John Singer Sargent’s Gassed painting.

In November, artist and U.S. Marine Corps veteran Richard Casper, a graduate of the School of the Art Institute of Chicago and co-founder of CreatiVets, gave a lecture entitled Warrior Brain to Artist Brain in which he recounts how art helped him deal with the aftermath of four IED explosions that resulted in Traumatic Brain Injury and PTSD. Following the lecture, he led an art-making session with a group of veterans. Richard was recently named a Next Generation Leader by TIME magazine.

Tennessee in general, and Nashville in particular, played a significant role in World War I -- over 100,000 people stepping forward to serve in uniform, the creation of the Old Hickory Division, the incredible volunteerism from the home front, the saga of Alvin York and five other Medal-of-Honor recipients. These stories are so important. What do you hope people take from the experience of seeing this exhibit, and attending the public programs?

You’re absolutely correct. Tennessee has significant connections to WWI, and it’s been so gratifying to join with the Tennessee Great War Commission and so many other organizations to keep those stories alive and help illuminate the contributions of Tennesseans to the war effort. African-Americans from Nashville fought in the war, and the campus of Fisk University served as a recruitment center and training camp. The War Memorial Building in Nashville was built to honor Tennessee’s 3,400 fallen, yet many only know the building as a concert venue. Columbia, Tennessee celebrates Mule Day each year -- yet, the fact that Middle Tennessee sent mules to Europe during WWI is little known.

Our vision at the Frist is to inspire people through art to look at their world in new ways. Having this first major exploration of the art of WWI in Tennessee during this centennial commemoration of America’s entry into the war has given us a tremendous opportunity to, through the eyes of artists, delve deeply into the conflict from a different perspective.