Westampton, NJ — A reverence for Colonial history led Erik Burro to write about it, reenact it and give presentations in 12 states and abroad 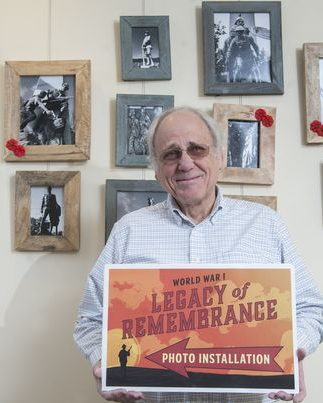 Erik Burro stands by an exhibit containing his photographs of Doughboy soldier World War I monuments displayed at the Burlington County Library in Westampton, NJ. Upon moving from the Colonial city of Philadelphia across the Delaware River to another Colonial area in Willingboro and then to Burlington City, he would pass the statue of a U.S. soldier every day. The World War I memorial on High Street was just a few blocks from Burro's city home and office but he paid it little attention.

After realizing in 2016 that the centennial of U.S. entry into World War in 1917 was approaching the following year, he stopped for a closer look at the Burlington statue depicting a Doughboy — the nickname for Army soldiers of that war — and the memorial hall behind it.

"I became smitten with finding more of these tributes," said Burro, a historian and photographer who began writing history papers and reenacting even before the American Bicentennial in 1976.

"And when I give talks today about the World War I photos, people are just as amazed as I was at how many memorials are out there, their size and their diversity."

His exhibit of the 33 Doughboy statues he found in the state is hanging in the Burlington County Library in Westampton until Jan. 15. It will then move to the Trenton Free Library. A more wide-ranging exhibit of major World War I monuments in the state is in the Hoboken Historical Museum until Feb. 18.

He has entitled both photo collections a "Legacy of Remembrance."

Now semi-retired at 73, Burro is continuing his search for other monuments he may have missed in the absence of a comprehensive database.