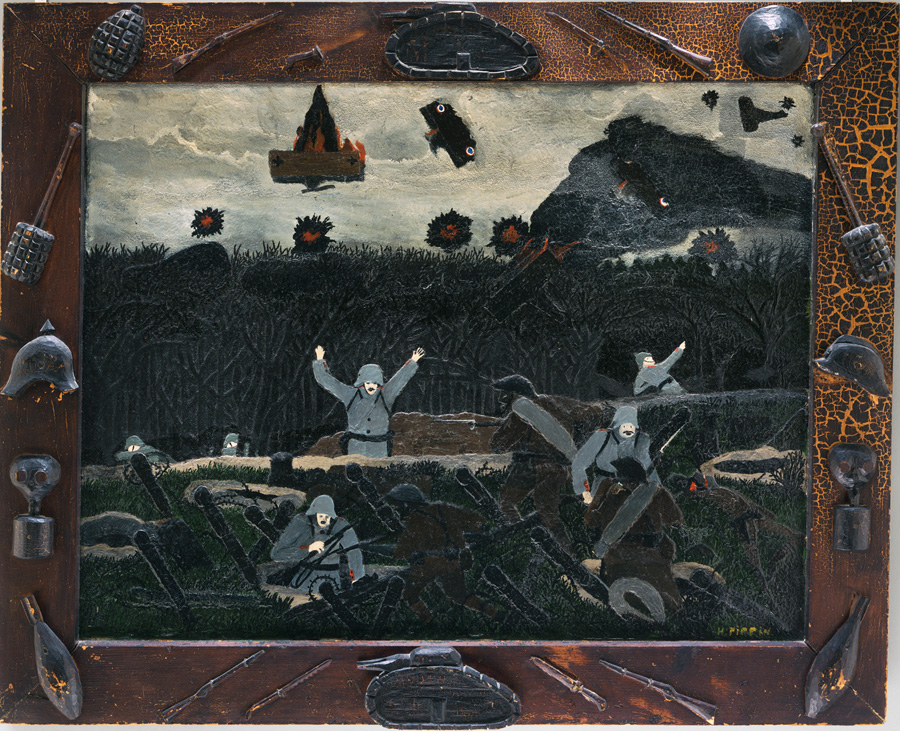 Horace Pippin painting: The End of the War - Starting Home

By Barry Hudock
via VFW Magazine

WWI Army veteran Horace Pippin fought with the famed “Harlem Hellfighters” during the Great War. His oil-on-canvas depictions of his experiences in France made him famous. 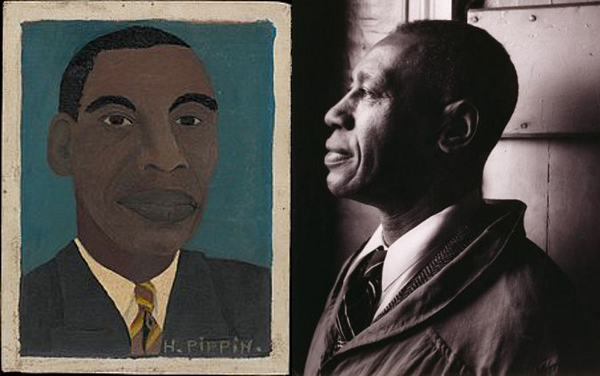 Painter Horace Pippin self portrait and portrait photo.As America marks the centenary of its involvement in World War I, the achievement of one veteran deserves commemoration. Horace Pippin, who fought in France with the renowned 369th Infantry Regiment of the 93rd Infantry Division, went on to achieve importance as an artist after the war, despite war wounds that left him partially disabled.

“His work is endlessly fascinating and quite beautiful,” said Anne Monahan, a current fellow at The Met in New York and an independent scholar who specializes in 20th century art. “American art would be diminished if he were not known.”

Born in West Chester, Pa., in 1888, Pippin moved at age 3 with his mother and two siblings to Goshen, N.Y., where he attended a segregated, one-room schoolhouse. Horace enjoyed art even in childhood, but the realities of growing up in a poor black family meant he had to leave school to find work at 15 years old.

He worked in a variety of manual labor jobs until he enlisted in the Army in March 1917, just as the U.S. was about to enter WWI. He joined the 15th New York National Guard Regiment, soon to be renamed the 369th Infantry Regiment and known more informally, and more famously, as the Harlem Hellfighters, or Harlem’s Rattlers (see sidebar). Cpl. Pippin served with K Co., 3rd Bn.

The 369th spent 191 days at the French front, immersed in the dangerous trench warfare that was a common experience for Doughboys. With his fellow soldiers, Pippin faced withering machine-gun fire and devastating artillery attacks. They spent weeks in trenches that were wet and filthy. Along with the violence, mud, lice and rats were constant features of their days. 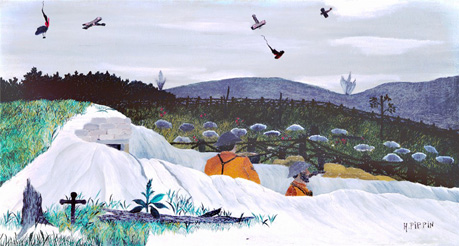 Horace Pippin painting: dog fight over the trenches, 1935Sometime during that period, Pippin was shot in the right arm by enemy sniper fire.

“We don’t know exactly when he was wounded,” said Jeffrey Sammons, a history professor at New York University. “It doesn’t turn up in his diary. But it seems likely to have happened at Sechault, late in the war, around Sept. 26 or 27, 1918,”

Returning home to West Chester with a crippled right arm, Pippin was unable to do most of the kind of work by which he’d previously earned his living. Receiving modest disability payments from the Army, he turned to art as a method of self-expression and dealing with his new life. He started working with a technique called pyrography, burning images onto wood panels with hot instruments. In this way, he created what Monahan calls “folksy narrative panels” — simple but moving scenes of rural home life and the outdoors.

But at the beginning of the 1930s, he turned to a topic he had not tried to depict before in his art: his war experience. At the same time, he changed the medium he was working in, moving now to oil paints on canvas. Completely self-taught, Pippin learned to use his left arm to hold and guide his right hand holding the brush.

“His first painting on canvas was of, what appears to be, the battle in which he was wounded,” Monahan said. “So Pippin took up a whole new medium to explain the subject [of his wartime experiences]. He wanted to work on a bigger scale than the wood panels would allow.”

That painting was The End of the War — Starting Home. He followed that with many other paintings, including some further war images, such as The Barracks and Dog Fight over the Trenches. Pippin said at one point that his war experience “brought out all the art in me…. I paint from it today.” He also chose subjects from rural black home life, American history and the Bible. Pippin’s work began to gain some notoriety around the region and then nationally.

At the end of the 1930s, Pippin achieved national acclaim. His paintings were displayed in major galleries around the country, purchased by wealthy collectors and celebrities, and published in Time, Vogue and Life magazines. Pippin died of a stroke in 1946, but he remains an important figure in American art.

Barry Hudock is a freelance author based in Albany, Minn. 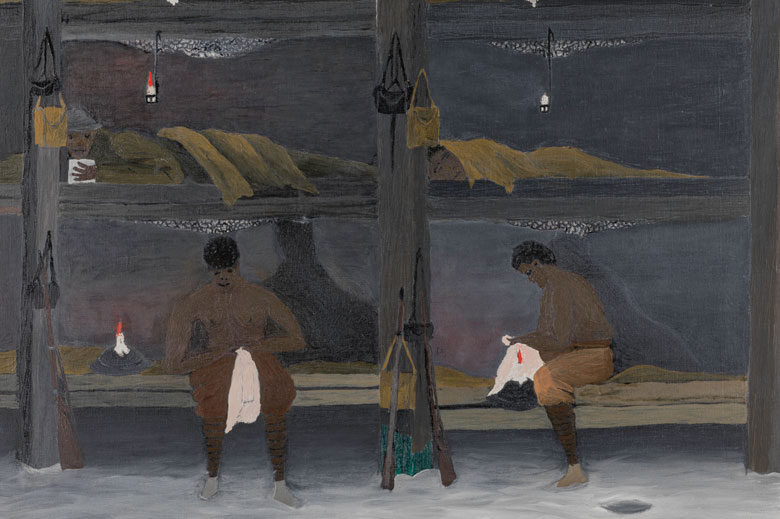