By Sarah Zhang
via the Atlantic Magazine web site 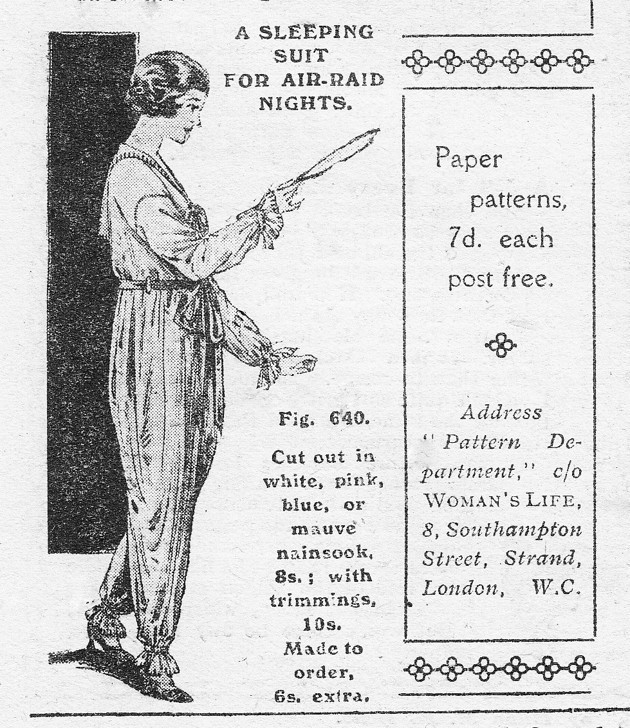 Another novel form of trousered attire for women was the one-piece sleeping suit, suitable for venturing out during air raids.World War I introduced so many terrifying new ways to die, and chief among those was, of course, death by air.

You didn’t even have to be a soldier. For Londoners, the threat began in January 1915, when the Germans sent zeppelins loaded with bombs across the Channel. Eventually, they sent planes, too.

The air raids, often at night, accomplished little tactically, but their true purpose was to terrorize civilians and sink British morale. “There’s never been anything like this. Suddenly a blazing bomb is coming out of the sky and setting light to a house, it’s almost science fiction,” an aviation historian told the BBC.

The air raids brought the war to the home front. They intruded in the bedroom, the most private space of all. And thus, they had quite an effect on fashion.

Think about it this way: Bedclothes are among most intimate of garments. But with the advent of nighttime raids, these private fashions were thrust suddenly into the public sphere when people had to evacuate their homes at a moment’s notice. It was the original “I woke up like this.”

A crumpled nightdress would no longer do. It was a matter of practicality! But also a matter of looking good!

On January 21, 1915, days after the first zeppelin raid over England, the Manchester Guardian reported that women were already strategizing how to prepare to “meet the midnight world at a minute’s notice.”

None of those questioned seemed to be much alarmed at the prospect of a raid, but they all admitted—with some surprise that anyone else should have had the same forethought—that when they go to bed nowadays they are always careful to hang a becoming cloak near at hand. Some of them had thought of silk scarves to throw over their heads. An elderly lady recommended an emergency toupee.

As the bombings continued, distinct trends took hold. Pajamas, or “pyjamas,” as the Brits called them—a loose-fitting set of jacket and pants—became especially popular. “Women in trousered attire of any kind was a new phenomenon in 1915 and many magazines saw pyjamas simply as ‘the season’s novelty,’” wrote the historian Lucie Whitmore in a recent Twitter thread on WWI air-raid fashions. But they ended up being much more than a season’s novelty—“pyjama” sets are hanging on the racks of your local Target even today.

Read the entire article on the Atlantic Magazine web site: