What writers like to do most is to write — ideally in a quiet place, and most often, by themselves. So what motivated these four authors — Edith Wharton, Agatha Christie, Dorothy Canfield Fisher, and Enid Bagnold — to leave their comfortable homes and writing desks, and get involved in war efforts, as nurses and refugee and relief workers? 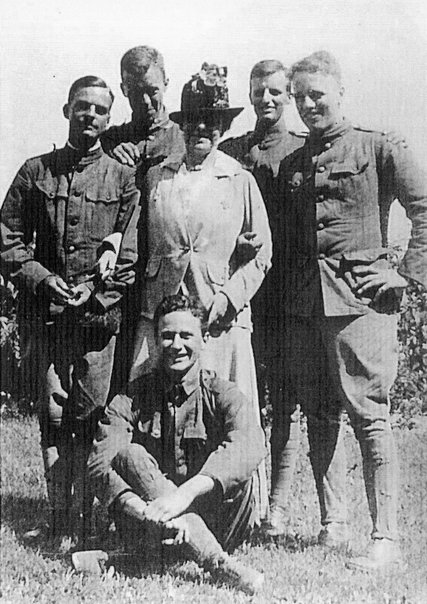 Edith Wharton with WWI soldiersEach of them, two Brits and two Americans, has a unique story of their involvement in World War I, in Britain and France.

Edith Wharton (1862 – 1937) was a wealthy heiress and a product of New York high society, never wanting for anything — except perhaps happiness. She was nonetheless socially conscious and became more of an observer of the upper crust than an adherent to it.

After her divorce from Teddy Wharton in 1913, Wharton moved to France, which was on the brink of entering World War I. Upon the outbreak of the war, she immediately plunged into relief work. Among her accomplishments were employing skilled 90 women who had been thrown out of work; feeding and housing hundreds of child refugees, establishing hostels for other refugees; and assisting wounded soldiers and struggling families.

She wrote: “There is hardly a form of human misery that has not come our way and wrung our hearts with the longing to do more and give more.” An account of some of her expeiences, My Work Among the Women Workers of Paris, was published in the November 28, 1915 edition of The New York Times.

For all her compassion for war refugees, wounded soldiers, and orphaned children, Edith Wharton wasn’t perfect and made no secret of her antisemitism. It’s hard to square those two sides of her, though it’s apparently true that they coexisted in one talented, energetic, and complicated woman.

Soon after Agatha Christie (1890 – 1976) married an officer in the the Britain’s Royal Flying Corps, her new husband was deployed. She, too, joined in the efforts in 1914. While Archie Christie battled German forces, Agatha worked as a volunteer nurse in the VAD (Voluntary Aid Detachment). She clocked in more than 3,000 hours of unpaid work assisting physicians and apothecaries. serving in these capacities until 1918.