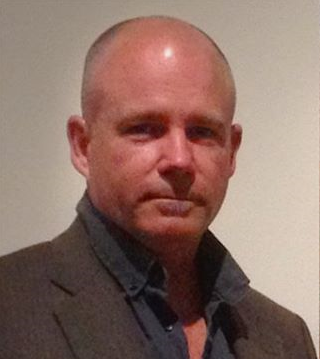 Michael WilsonMichael Wilson is a visual artist, and a military veteran, who has created a remarkable new WWI-themed art exhibit, which will be showing at the Cedar Rapids Museum of Art, Cedar Rapids Iowa from September 15 – December 30, 2018. This show is entitled "ONE: Man, War, Hundred Years", and the project is endorsed by the U.S. World War One Centennial Commission, and ithe Iowa WWI Centennial Committee. We had the opportunity to ask Michael some questions about his upcoming exhibit.

You mention in one of your Facebook posts that your Great Uncle registered for the draft in World War One.

Yes my Great Uncle Herb registered on June 5 and fought in the war. One of the pieces in my exhibit is titled Over There and it’s a mixed media piece that includes an authentic New York Times newspaper (dated May 19, 1917). The NYT headline calls the nation to arms and says that registration would be on June 5. The painting includes a copy of my Great Uncles registration card (dated June 5, 1917) and authentic sheet music to the popular WWI era song Over There by George Cohan.

Did he fight in the war?

What do you know about his experience?

My art exhibit is actually inspired by a small leather datebook my Great Uncle kept in which he documented his service. In it he logged dates with short succinct descriptions of his activity. 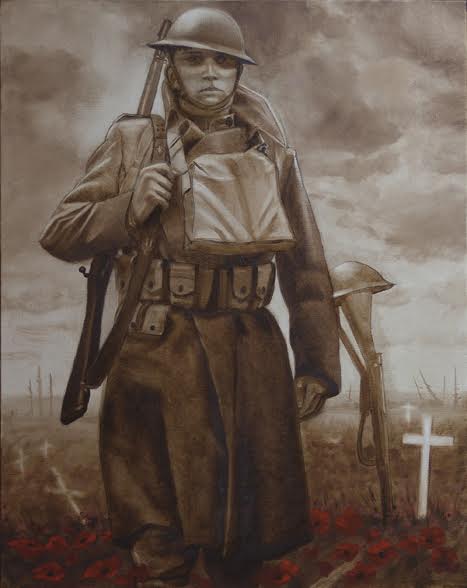 Here are a few of his entries:

I also found an Official History of the 82 Division online and I could literally match my Great Uncle’s movements with the official history of his division. I also found a book titled War in Words by Daniel W. Phillips who also served in Herb’s company. It’s a first-hand account that really fleshed out specific details about Co. B’s war experience.

What do you hope viewers of your exhibit will take away from it? Do you want them to leave with any particular thoughts or visions?

A: I titled the exhibit ONE: Man, War, Hundred Years because my vision is that the exhibit initiates inner dialog about war’s impact on and off the battlefield through one man’s experience 100 years ago. For example when I was a young child my Great Uncle Herb and I were close. He passed when I was young so creating this art exhibit was an opportunity to revisit our relationship as an adult; to ask and attempt to answer questions that as a child I could not have asked or even understood the answers to.

He came back from the war, married and had three children all dying in infancy so I inherited much of his WWI memorabilia. I grew up surrounded by these things in my bedroom. So during the course of creating the artwork for this exhibit, I discovered that my Great Uncle’s impact most likely influenced my joining the Iowa Army National Guard my senior year in High School. Creating the artwork for the exhibit initiated the inner dialog that led to my understanding this – so my hope is that the exhibit will initiate that inner dialog in others.

The World War One centennial is a popular topic right now and is being memorialized in books, documentaries, museum exhibits, articles and more. Why did you choose to memorialize the war in the forms that you chose? What art forms did you use and why?

Great question. I’m a full-time artist working primarily in oil on canvas, so as an oil painter, oil paintings are my preferred form of communication. There’s a good reason why people say, “A picture is worth a thousand words.” Images are a primal and universal human language that cross all language barriers and they even transcend time and space. This is why John Singer Sargent’s painting Gassed communicates as effectively today as it did 100 years ago. 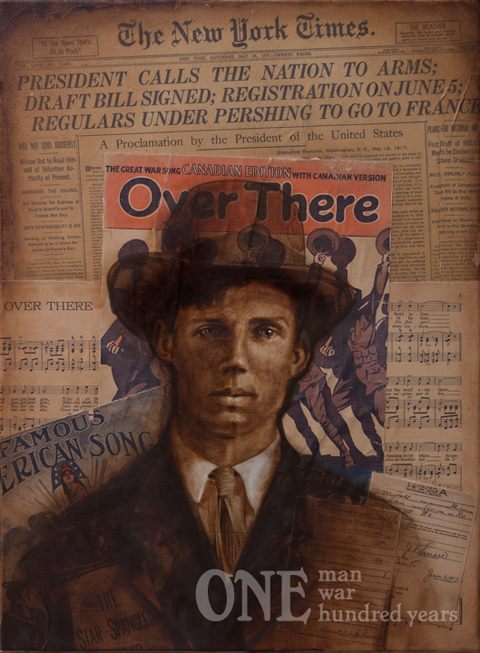 My philosophy is that we imprint with the people and landscape of our childhood. Even when removed, we judge all other horizons through our perceptions of “home”. Like many American artists throughout history, I like to examine the people and places where I live in order to discover and redefine my own identity and sense of place. The goal of my art is always to initiate the inner dialog that leads to a more genuine sense of place. I am convinced that a genuine sense of place leads to genuine relationships – with other people and with the land.

What is your favorite piece in this exhibit and why? (If you have a photo of this piece you would like to share please feel welcome to).

Not fair! That’s like asking a parent which child is their favorite. I guess right now my favorite is a painting titled Started moving again (attached). It was one of the last pieces created for the exhibit, and after having completed much soul-searching dialog throughout creating the other paintings, this one was somewhat of a breakthrough for me.

From my experience in military I know that long hours of marching are often the time when one’s mind has the time to reflect on the day and to think about loved ones and home. The moment I started painting it I instantly thought of the Tin Man from The Wizard of Oz. I think the trench coat reminded me of when Dorothy and the others overpower the Witch’s guards and wore the guard’s long coats to sneak into the castle. In Frank Baum’s original books the Tin Woodman was a real man who’s axe was enchanted by the Wicked Witch to chop off his limbs one-by-one. Each time this happened the Woodman went to a tinsmith to have the limbs replaced until eventually nothing was left but tin. The tinsmith neglected to replace the man’s heart, which led to the Tin Man joining Dorothy and the others in search of one from the Wizard.

In the end I resolved that my Great Uncle (at that time a young man of 23 years), after witnessing the countless horrors of war, surely had to metaphorically cut off pieces of his humanity in order to complete the mission. The introduction to the Official History of the 82nd Division words it better than I can:

“This Division has no illusions concerning war. The glamour of peace-time pageantry does not fill the mind of the veteran. He has learned that battles are won by terribly tired men. His worst enemies were thirst, filth, cold and utter weariness. An offensive suggests an endless movement of sleepless men and animals through countless black nights of rain and mud. It transforms dawn and dusk into a monstrous nightmare of waiting for some new horror. But the veteran also believes that life without liberty is more hateful than war. He still prefers battle to the loss of country or the betrayal of human institutions which carry the hopes of men.” – Official History of the 82nd Division, American Expeditionary Forces “All American Division”, 1917-1919

Betsy Sheppard is a Spring 2018 Intern with the U.S. World War One Centennial Commission.

Artist Michael Wilson applies paint to canvas as he composes one of the works that will be on display in Cedar Rapids later this year.