In 1918 these three vessels were part of a wartime fleet of 303 U.S. submarine chasers that formed a new offensive against the enemy, armed with depth charges, deck guns and an array of new, top secret submarine detection and pursuit devices. These miniature wooden war ships, the smallest commissioned vessels in the United States Navy, were the first major deployment mechanism for early antisubmarine warfare equipment, and were remarkable in their capabilities and service.

By Todd A. Woofenden
Publisher, The Subchaser Archives web site

Imagine crossing the Atlantic Ocean in a wooden motorboat—but not an ordinary motorboat. The U.S. submarine chasers of WWI were 110’ in length, and were armed with a 3” Poole deck gun, racks of depth charges, a Y-gun launcher, and Lewis and Colt machine guns on the bridge wings. Below decks were a galley, an engine room, a radio room, quarters for two officers and a crew of over twenty men, fresh water tanks, and storage rooms.

During the war, 303 of these miniature warships took part in the antisubmarine warfare effort. A total of 133 chasers crossed the Atlantic Ocean, and of these, 102 engaged in ASW operations out of Plymouth, England; Corfu, Greece; and Queenstown (Cobh), Ireland. 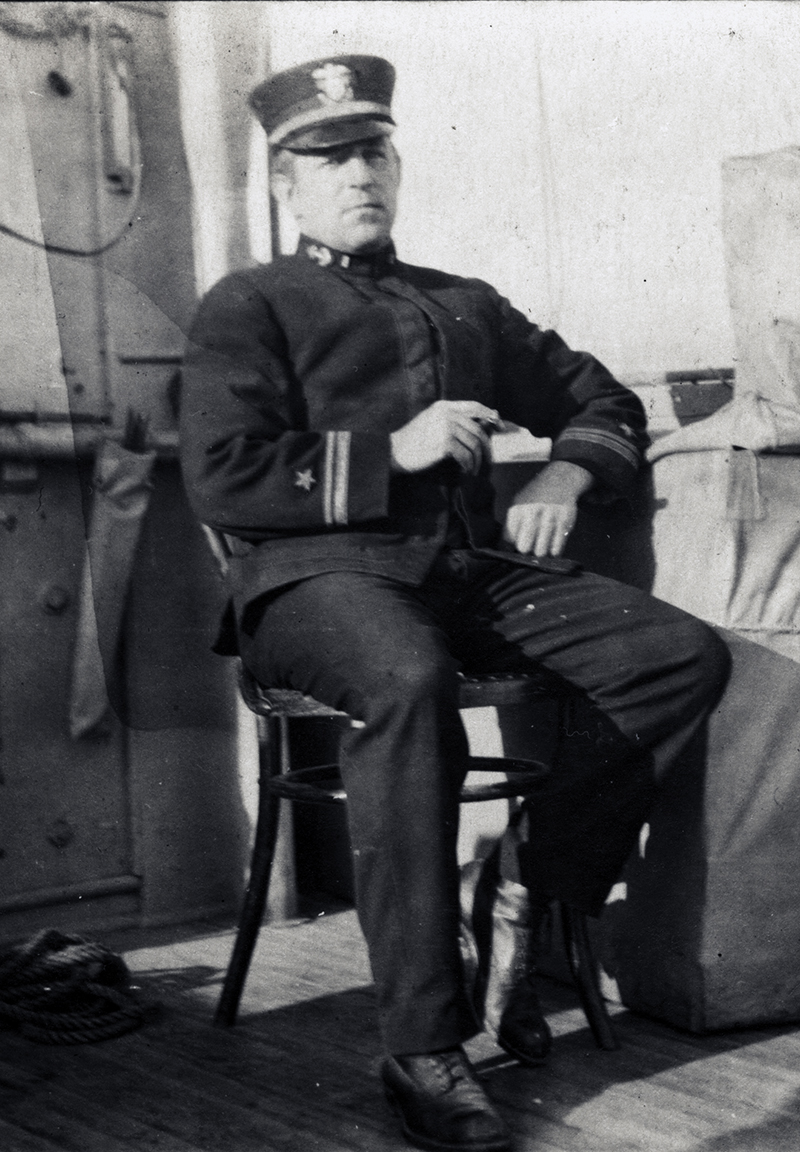 Lt. Dole was one of many thousands of men assigned to chasers in WWI. But in addition hunting U-boats, he provided another service, by preserving paperwork and photos from his time on the chasers. The collection he left behind includes the original nautical charts that were used on the bridge of SC 93; rare, unpublished tactical documents on the use of new ASW devices and methods for pursuing enemy submarines; and a large set of period photographic prints. Also in the collection are hundreds of pages of USN correspondence, invoices showing acquisition of supplies and equipment, and personal accounts of his time on the chasers.

I could see in these materials a fascinating, untold story of technical ingenuity, experimentation, and raw grit: This was the advent of antisubmarine warfare, and the men who served on the chasers were right in the middle of it. New technologies, quaint by modern standards but top secret innovations at the time, were being tested and adapted even as the chaser fleet was being built and deployed.

The rapid construction of the fleet employed boat builders all across the country. Due to the construction efforts for larger warships, steel was in short supply, and so the chaser plans called for wooden construction. But seasoned wood to supply such a massive boatbuilding effort wasn’t available. This led to leaky hulls, and the need for regular repairs and sealing.

A significant logistical challenge was the need for hundreds of engines for this new class of vessel. Standard Motor Construction Company was selected in part because they could promise the large number of engines needed. But to achieve the technical specifications for speed, the chasers each had to be fitted with three enormous Standard 220 hp gasoline engines.

Similar challenges were faced in arming the boats. For example, the Poole 3”/23 caliber deck gun was not immediately available in the numbers needed, so early on some of the chasers were fitted with other deck guns such as the Davis non-recoil gun. The Davis gun fired a charge of pellets from the breech as the round was fired, counteracting the recoil. Chasers with a Davis gun had a pipe frame erected around it, to prevent accidentally firing the countercharge into the pilot house.

Just as massive was the task of training thousands of men in the new science of ASW. Many of the officers assigned to chasers were newly minted ensigns, Navy Reservists fresh from college. Some had no sailing experience, and neither they nor the men assigned to serve under them had any training in antisubmarine warfare, as the science was brand new.

Yet by the deathly cold winter of 1917-1918, chasers in New London were preparing to hunt enemy submarines. On some days the harbor was frozen, and icebreakers had to clear a channel to allow the chasers to reach open water for training. But in spite of these challenges, by early in 1918 these wooden motorboats were moving overseas in convoys—crossing the Atlantic Ocean under their own power. Soon they were on the barrage lines, hunting enemy submarines in units of three chasers.

To detect a submarine involved stopping all engines to cut the sound and lowering the “tubes,” the listening devices. This wasn’t easy work. With the engines off, the chasers rolled freely on the ocean, at times dipping the beam ends under. The chaser crews had to try to pick up the sound of a U-boat while simultaneously trying to hold on.

The listening devices were designed to detect the sound of submarine engines, and also to determine the direction of the sound with respect to the orientation of the chaser. By working in units of three boats, the readings could be triangulated to determine the location of the submarine. The chasers would then pursue, and upon reaching the estimated location, would drop a series of depth charges from the stern. At a specific point the wing boats would turn off from the unit leader, and the Y-guns would be fired, launching depth charges in a wider pattern. 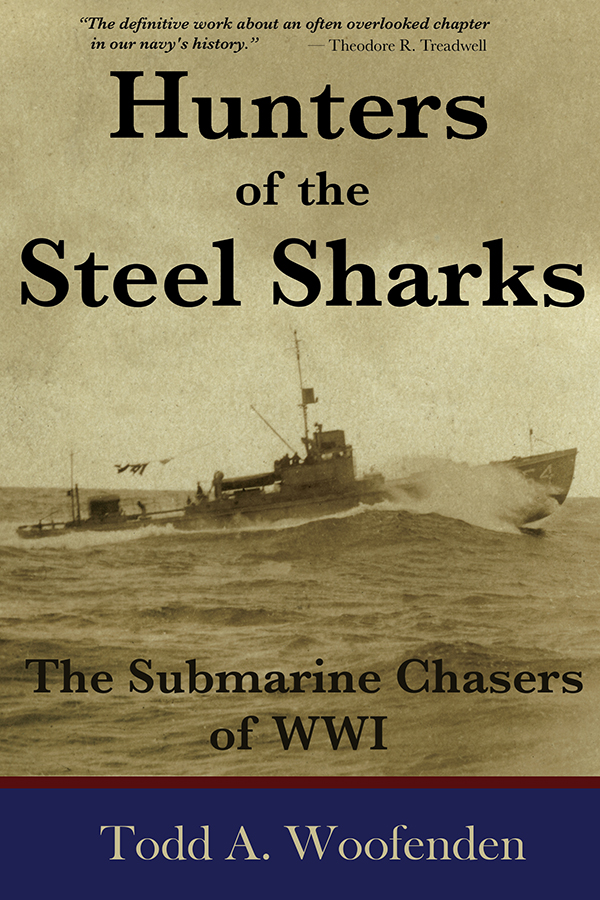 Determining the depth of the enemy sub was guesswork. The tubes couldn’t measure the depth of the detected sound. Instead the charges were set to explode at whatever depth the commanding officer of the unit leader determined to be appropriate. Perhaps more difficult was the task of determining the result. Early on, the presence of an oil slick after an attack was considered to be evidence of a hit. But exploding hundreds of pounds of TNT under water inevitably creates an enormous disturbance. Fish floated to the surface, and the water looked oily. Moreover, U-boat captains had their own tactics, including discharging oil or objects to make it appear that they had been hit.

Chaser units were equipped with a device called the “trailing wire,” a reel of phosphor-bronze wire connected to an annunciator in the pilot house. To detect a sunken submarine after a hunt, the wire was reeled out with a weight attached to the end. If the wire made contact with a metal object, a small electrical current would sound the annunciator. The chasers would run back and forth over the area of the attack searching for the submarine hull. But especially in the extremely deep waters of the Strait of Otranto, this device was impractical. The photographic evidence shows that the trailing wire was removed from most chasers early on.

Ultimately, while many pursuits and attacks were made, there were no confirmed kills by U.S. submarine chasers. In many cases, reports of submarine kills were filed only to be rejected when the submarine in question was sighted subsequently in port.

But the effectiveness of the chaser fleet can’t be measured in terms of kills. While their expressed purpose was to hunt and attack enemy submarines, the main objective of the barrage lines was to prevent U-boats from reaching open ocean. Hampering the progress of enemy submarines meant shortening their hunts: ideally preventing them from crossing the barrage lines entirely, but in any case slowing them down and forcing them to return to base with fewer days and hours in the shipping lanes. And in fact the numbers seem to bear out the effectiveness of the effort: As the barrage lines were fortified by chasers and other ASW craft, U-boat kills were significantly reduced.

On his arrival overseas, as he prepared his crew for active ASW operations, Dole remarked, “I have often thought as we were on the peaceful voyage just completed, and watched the stars keeping time absolute, infallible, and guiding us on our journey in safety, that the steel sharks will not long be allowed to interfere with the beauty and safety of His seas.”

Hunters of the Steel Sharks: The Submarine Chasers of WWI tells this story, covering the complete history of U.S. submarine chasers in WWI from planning and construction through armament, training, and service in the war. It fills a gap, providing what Theodore Treadwell (who served on U.S.S. SC 648 in WWII), describes as, “the definitive work about an often overlooked chapter in our Navy’s history.”

Many others also participate in showcasing the history of these little warships. For over a decade, The Subchaser Archives website (https://www.subchaser.org) has been showcasing WWI chasers. Descendants of chaser crewmen, historians, and others regularly submit materials. If you’re interested in following the work, see the form near the bottom of the website to sign up for a monthly emailed newsletter of newly posted materials.

As a special feature, this year and into 1919, the site is displaying “100 years ago today” posts, chronicling the unfolding story of the chasers.