Town of Seicheprey, soon after the battle.

On April 20th, 1918, in Seicheprey, France, near the St. Mihiel Salient, American soldiers engaged in their first significant infantry battle of World War I. 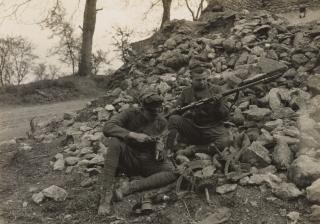 Soldiers from the 26th Division after the Battle of Seicheprey, 1918. Image courtesy of the National Archives.On the front lines, the St. Mihiel-Metz corridor was seen by General Pershing as the entrance to Imperial Germany. He considered it to be a key operating and training area for his growing force of soldiers.

In 1918, Pershing started sending a number of his divisions to the St. Mihiel Salient for combat exposure, and in situ training. This front-line training involved units from the 26th Division, known at the “Yankee Division”.

The battle of Seicheprey occurred on the southern side of the St. Mihiel salient. There, three companies of the Yankee Division's 102nd Regiment occupied a trench, known as the Sibille trench.

On April 20th, the German Army attacked from the northeast, north, and northwest, arriving at the town simultaneously in three different groups. This attack outmaneuvered the Americans, and inflicted a number of American battle casualties, which ranged between 400 and 500 people wounded & killed.

As remembered by General Clarence Edwards, commander of the 26th Division, the German bombardment on Seicheprey began at around 4 o’clock in the morning. Soon after, the Germans captured the town. 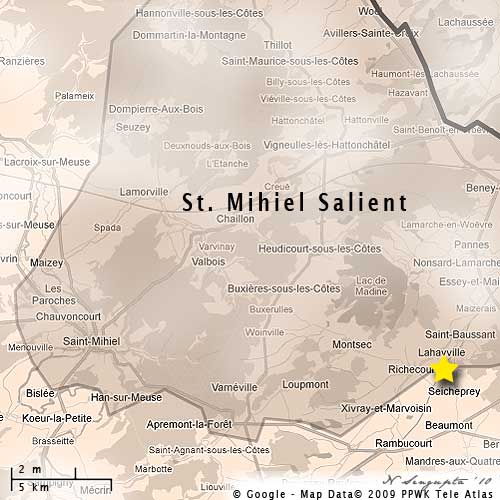 However, the Yankee Division did not back down from the attack. They initiated a counter-attack that night, in which the 102nd Regiment took lead, and as a result, was the hardest affected. The counter-attack regained the American trenches.

General Pershing reported later that the clash left 81 Americans dead, 402 wounded or disabled by poison gas, and 197 taken prisoner or left missing. The German toll was estimated by the Americans at more than 1,200 -- though the Germans said it was far less.

After, the Germans claimed that they had retreated voluntarily and victoriously, noting their successful capture of many American soldiers.

Despite the casualties and German taunts, the 26th Division proved to the Germans that they a serious military group -- sacrificing their lives, rather than surrendering when surrounded.

Betsy Sheppard is a Spring 2018 intern with the U.S. World War One Centennial Commission.