He was a classmate of George Armstrong Custer at West Point

Hains Point in DC named for WWI US Army general...who also served in the Civil War

One of the favorite picnicking spots in the Washington area is Hains Point, overlooking the Tidal Basin, now home to a baseball field, tennis courts, swimming pool and other sports amenities. 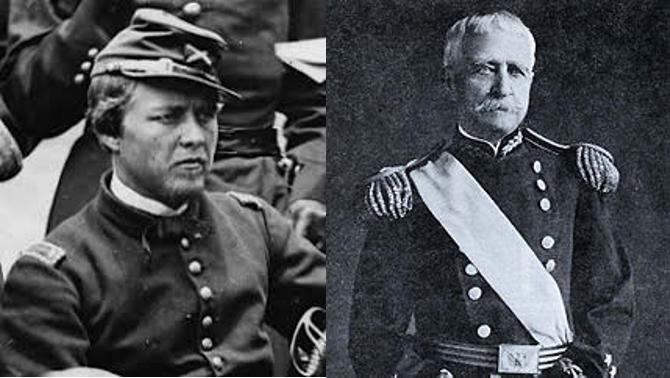 Peter Conover Hains (July 6, 1840 – November 7, 1921) was a Major General in the United States Army in World War I (right) but also a veteran of the American Civil War (left) and the Spanish–American War. The extremely large golf course dwarfs every other sports activity there at all hours of the day. Those of a certain age will recall it as an excellent viewpoint for the nightly submarine races in the area. Its view of the river through the towering weeping willows makes for a peaceful oasis in a busy city.

Few who go to Hains Point know the man for whom it was named. Peter Conover Hains was an officer in both the Civil War and World War I, and his engineering talent gave us the Tidal Basin and surrounding land.

It is a little-known fact that Hains fired the first shot at the Battle of First Manassas on July 21, 1861. He had been commissioned a second lieutenant in the artillery, and it was his responsibility to fire three rounds from the largest Union weapon on the field - a 3-ton Parrott gun firing 4-inch, 33-pound projectiles. This served as a signal that the attack had begun.

His target was said to be a white house beyond Bull Run, it not being known if this was the Robinson farm, the Henry House or perhaps another one. The battle would rage for some time until Confederate Gen. Thomas J. “Stonewall” Jackson’s troops sent the Union men packing.