By Adam Rogan
via the journaltimes.com web site

RACINE, WI — Not all heroes wear capes. Nor do they all fight with weapons.

The “Hello Girls” fought with skill and cutting edge technology — well, cutting edge for the early 1900s. The Hello Girls were the first women to be sent to war by the U.S. Army, working as telephone switchboard operators and connecting 26 million calls throughout the First World War. 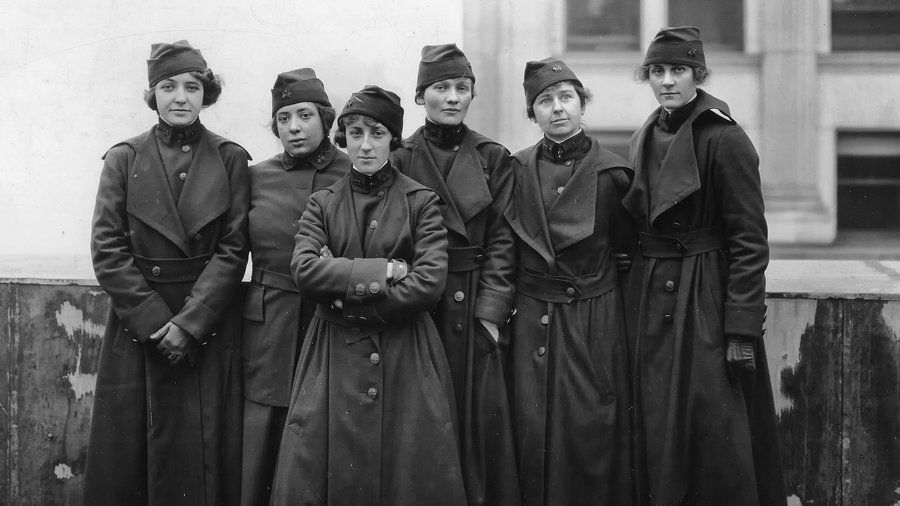 This is the most well-known photo of "The Hello Girls," braving the cold outside of their headquarters in Chaumont, France. The Hello Girls were the first women to be sent to war by the U.S. Army, working as telephone switchboard operators and connecting 26 million calls throughout the First World War.However, from when the war officially ended in 1918 until 1977, they weren’t recognized as veterans, despite working side by side with men and oftentimes doing their jobs more efficiently than their males counterpart.

“This is where the women’s service in the military starts as soldiers and not as nurses,” said independent documentarian James Theres, a Racine native and 1982 graduate of Horlick High School, who directed the new documentary “The Hello Girls.”

Theres is an Army veteran who fought in the Persian Gulf War. Now, he works as a speechwriter for the U.S. Department of Veterans Affairs in Washington, D.C., but makes documentaries on the side.

“I was telling the story of soldiers who came before me,” Theres said. “I found filmmaking to be a unique way to tell stories about history,” he said.

“I wanted to tell stories that are … stuck in the nooks and crannies of history.”

His first documentary film, “The 30th of May,” was released in 2016 and wanted to make another. The Hello Girls seemed like a perfect fit.
Racine native creates award-winning documentary

The Hello Girls were among the first Americans sent to World War I in 1917 and among the last to leave the following year, having stayed to help coordinate the peace talks.

The 223 women worked closely with the all-male U.S. Signal Corps and were vocally praised by General John J. Pershing, the American military leader for whom Pershing Park in Downtown Racine is named.

According to Theres, the Hello Girls could connect a call in about 10 seconds — men in the Signal Corps often took a full minute.

None of the original Hello Girls are still alive today. So, Theres set about contacting family members and those who knew Hello Girls, as well as using archive footage, to tell their story.

Read the entire article on the journaltimes.com web site.