Sergeant Stubby: The dog that fought to liberate France in WWI

By Stéphanie Trouillard
via the france24.com web site 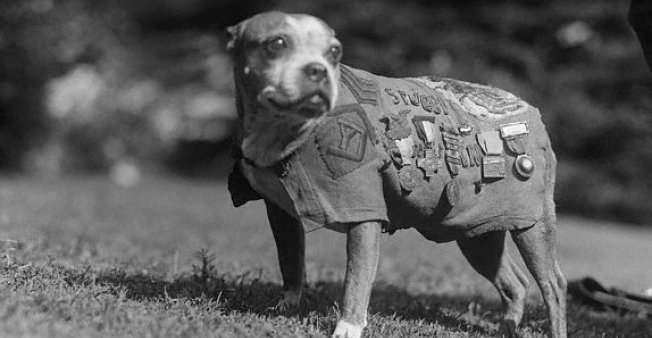 Stubby: The most decorated dog in WWI Sergeant Stubby took part in 17 battles, saved his regiment from mustard gas attacks and caught a German spy during World War I. By any standards, Stubby is a hero. But what makes his story all the more extraordinary, is that he was a dog.

Stubby won numerous medals for his bravery, and the heroics of this stray pit-bull have become so famous that his life-story has now been made into an animated Hollywood movie, "Sgt. Stubby: An American Hero".

Stubby became the official mascot of the USA’s 102nd Infantry Regiment after Private J. Robert Conroy found him in July 1917 at Yale University campus where troops were training before being deployed to France. Conroy found he could not part with his four-legged friend and smuggled Stubby in his cloak on the ship bound for Saint-Nazaire in France.

But Stubby was discovered by Conroy's commanding officer. Stubby promptly charmed the officer by saluting him, as Conroy had trained him to, and the little dog was allowed to stay.

Now in France, the dog faithfully followed his regiment: "There were many cases of animal mascots in the Anglo-Saxon armies, officials generally turned a blind eye,” historian Eric Baratay, author of the book "Beasts in the trenches", told FRANCE 24.

The heroic dog entered combat on February 5, 1918, at Chemin des Dames, where he endured shelling day and night for over a month.

On April 20, 1918, the German army launched an offensive in Seicheprey, a village in Meurthe-et-Moselle. Faced with the onslaught, the 102nd Infantry Regiment had a baptism of fire. The fighting was terrible, with more than 650 killed and 100 taken prisoner. Stubby was badly wounded in the foreleg and chest by Germans throwing hand grenades.

Luckily, Stubby recovered and boosted the morale of the wounded. As soon as he was back on four paws, Stubby rapidly returned to the front.

Read the entire article on the france24.com web site.