U.S. Marines charge in Belleau Wood during the 1918 battle.

Much of the Western Front had been ravaged by trench warfare and industrial slaughter for four years but Belleau Wood in the French countryside remained pristine.

The woods had long been a hunting preserve for local gentry, the flatland was used by farmers to grow wheat. Flowers dotted the tranquil landscape.

But in June 1918 this unlikely spot became the scene of a relentlessly bloody battle between an untested American army and battle-hardened German troops. The outcome, according to one historian, “changed the trajectory of the war.”

The Germans were determined to drive on to Paris some 60 miles away and force the exhausted, demoralized French to surrender. The Americans – particularly two regiments of Marines – were equally determined to block the German advance by bayonets if necessary.

When the three-week fight over, the Germans had been blunted. The once panicky Parisians were exultant. The Americans had shown their enemy – and skeptics among the Allies – that Americans could fight, sustain massive casualties and yet prevail.

While historians may debate the tactical significance of Belleau Wood, the impact on the French public was undeniable. Paris Is Saved! cried the newspapers. A massive parade in honor of the U.S. Marines was held.

The Belleau Wood Marine Memorial Marker. The life-size bas-relief, depicting a Marine attacking with rifle with fixed bayonet, was created by Felix de Weldon, the same sculptor who created the Marine Corps Memorial in Washington, D.C.The U.S. 2nd Division – which included soldiers and Marines – had been ordered to relieve American troops occupying the Cantigny sector in Picardy. Then the Americans received orders from the French headquarters early on May 31 to instead go east toward Chateau-Thierry and Belleau Wood.

The sight of French civilians trudging along rural roads shocked the once-cocky soldiers and Marines.

“Old women and young women (struggled) with babies at their breasts,” said Pvt. Joseph Rendinell. “Children hung on to their skirts and they all looked tired and were crying. Hundreds of them knelt on the side of the road when they seen us go by and prayed for us. It sure was a pathetic scene. We were not laughing now like we were before.”

French soldiers were in retreat, some warning “la guerre est finie.” The Germans would be in Paris within days, they said. “They told us they were the last of their bloodied units. Although the French were glad to see us, they said on many occasions, ‘It’s too late,’” said Marine 1st Lt. James McBrayer Sellers.

“We could see Hell from here,” said Pvt. Onnie Cords. “The sky was fiery red from the large fires caused by the Germans burning those poor French peasants homes.”

The Americans soon realized they were alone, that their French allies would not be much help.

“The French were thoroughly demoralized,” said then-Col. Albertus Catlin, commander of the 6th Marine Regiment. “They had been fighting interminably, pounded by guns, poisoned with gas, and borne back and broken by superior numbers. They were ordered to make a last stand, to counter-attack on the morning of June 3rd, but the units were disorganized; the officers simply couldn‘t get their men together.”

A French officer besieged the Americans to join the French in withdrawing to a defensive line. The response, most often attributed to Capt. Lloyd Williams, soon lapsed into Marine legend, “Retreat hell! We just got here.”

Finally on June 5, the order was given: the next morning the Marines would assault through a wheat field and capture Belleau Wood. French intelligence had promised that the woods were largely depopulated. The intelligence was faulty, much like French maps.

What lay ahead was a “lurking menace,” Catlin wrote. “We now stood facing the dark, sullen mystery of Belleau Wood. All through June 5th we waited, with nothing of moment occurring save increasing artillery on both sides. The sound was deafening.”

Through a constellation of unforeseen events, June 6, 1918, as historian S.L.A. Marshall would write, was to become as famous as the battles at Lexington and the Alamo, “an accident that changed the face of history.”

More Marines would be killed and wounded on June 6 than the total of such casualties in the entire previous history of the Marine Corps. “Many of our bayonets were bloody that day,” said Pvt. Cords. 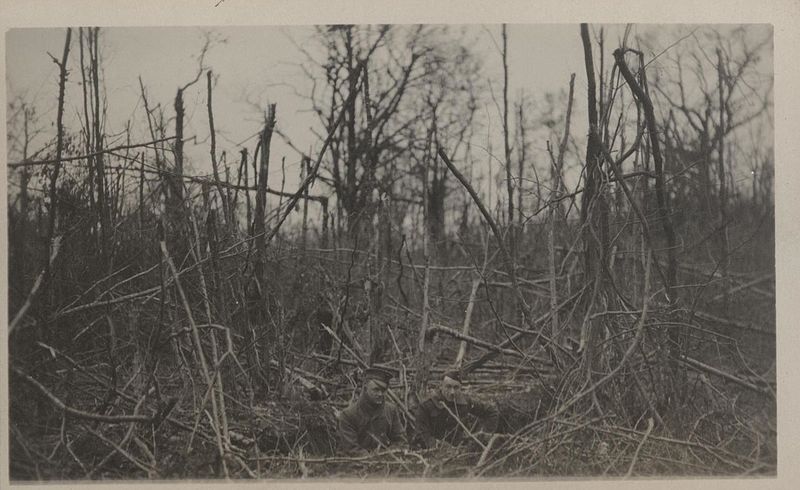 Marines in Shell Hole during Battle of Belleau Wood, 1918Fatefully, one of the most intrepid of war reporters was accompanying the Marines: Floyd Gibbons of the Chicago Tribune. He sneered at other reporters. He said they were satisfied merely to rewrite press releases.

Because of a lapse in the Army’s strict censorship rules, Gibbons’ story, filed before the assault began, went to America without any restrictions. The fighting at Belleau Wood would drag on for three weeks but Gibbons’ story, buoyantly overstated, immediately set off headlines across the country about a smashing victory for the Marines.

From the opening minutes, the fighting was close-up, so close that American artillery could not be used. The wounded, including Gibbons, lay for hours where they fell, pinned down by machinegun fire, tortured by thirst and hunger.

A Marine sergeant remembered having to rifle the packs of the dead – Americans and Germans – in hopes of finding food: “We had to, to live, I almost went mad before I got out of that wood.”

The Germans thought they had a solution: a massive artillery and poison gas barrage. It didn’t work. “The woods were just covered with dead Marines and Germans, mostly Germans,” Pvt. Martin Gulberg wrote his family.

Frederick Pottle was a medic in an Army hospital close to the front. Later, as a professor at Yale, he recalled the horror of the casualties.

“Some of them are babbling in delirium, some shouting and cursing as they fight their way out of the ether dream,” he wrote. “…They have walked unprotected straight though the murderous hail of machine-gun bullets; they have fought hand-to-hand with bayonets where the only possible outcome is either victory or death. These are the wounded Marines from Belleau Wood.”

For three weeks the battle raged, blood-soaked ground would be gained and then lost. Rather than a textbook battle employing classic tactics, it became a “punch-drunk struggle of endurance,” one Marine historian has written.

Based on field reports from German officers, historians have concluded that, from the beginning, the High Command knew that the significance of Belleau Wood was not which side could capture and hold terrain. The significance was whether the Americans, whose numbers were rapidly increasing along the front, could face the Germans as equals.

At the end of the battle, the answer was clear. A German general wrote to his chain of command in August 1918 that the Marines had taken Belleau Wood “with incomparable bravery” and earned the right to be considered “opponents worthy of respect.”

More than three months of tough fighting remained on the Western Front. But the tide of war had shifted away from stalemate.

Tony Perry retired from the Los Angeles Times after three decades as a reporter, including multiple trips to Iraq and Afghanistan. 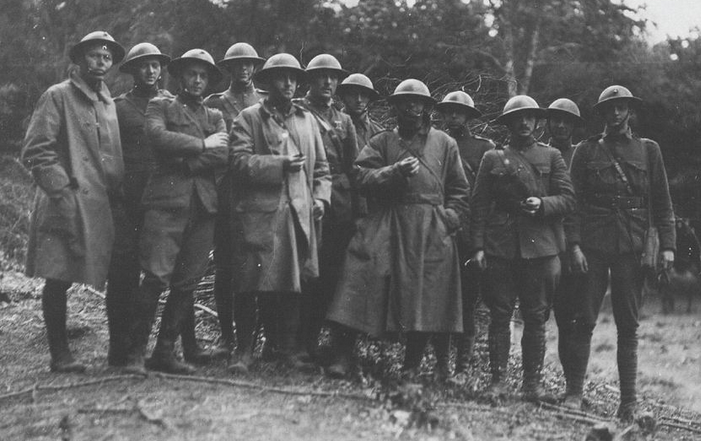