In our office, we hear about various education and commemoration projects happening this year from all over the United States, as well as some happening in other countries. We are thrilled to hear of such activities, because this is how the stories of our WWI veterans will be remembered and passed on. We recently received word of a remarkable efforts in France's Puy-de-Dome region, that we wanted to share, because of its truly unique scope and location. Entitled “Remembrance and Commemoration”, it is a two-part project that includes long-term research, and a series of commemoration events from 2017-2019. The program is being led by Eddy Oziol, History Department Professor at the academy of Clermont-Ferrand. Professor Oziol is a noted historian, and collector of objects and documents regarding WWI and conflicts of the 20th Century. We had a chance to talk to him about their upcoming Memorial Day commemoration event, and the ongoing research efforts, as his students made Memorial Day preparations.

What is your project? How did this project start? Where did it originate from? 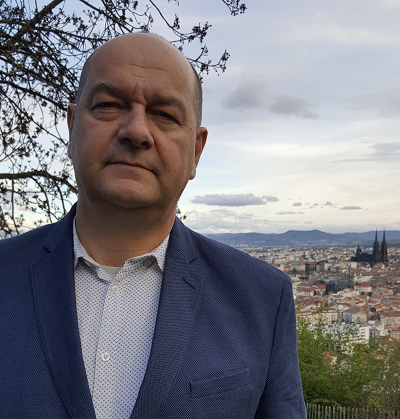 Professor Eddy OziolThe academy of Clairmont-Ferrand initiated the effort to hold activities surrounding the commemoration of the centennial of WWI. Using local, national and international resources; the project “La Fayette, here we are. The Americans in the Puy-de-Dome 1917-1919. A forgotten story, shared memories’, was suggested as a vehicle to awaken the memories of the US Army’s presence in the region of the Puy-de Dome during World War I. 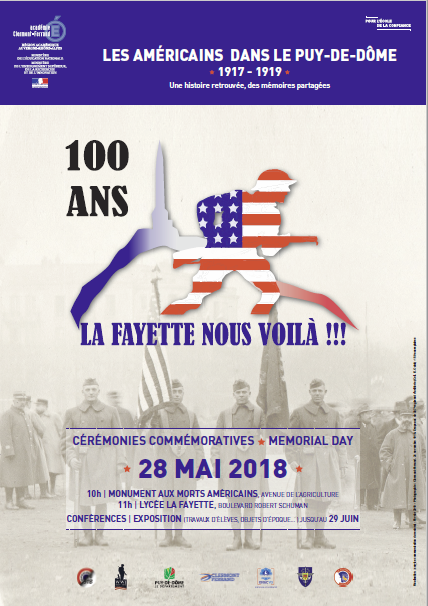 Handbill for the Memorial Day commemoration event in Puy-de-Dome, France

The objective was to engage students to organize and participate to the commemorative ceremony that is scheduled for Monday May 28, 2018 (Memorial Day) and that will take place at Clairmont-Ferrand in front of the Monument honoring the fallen American Soldiers of WWI.

In addition, there will be an exposition of period objects and of work and projects done by the students. Additional academic discussion will focus on critical issues that resonate today such as, the French-American cooperation in the framework of contemporary military, and the US Army’s role during the Great War.

Why the local Puy-de Dome focus? What happened here related to the war, and the American AEF effort?

The history of American presence at the Puy-de-Dome has never been studied with precision, likely because of its location in the center of France and not at the front line.

The research is assured by local, national and American archives, and has helped drawing a relatively detailed picture of the American presence in that region during WWI.

We estimate there were about 30,000 to 40,0000 American soldiers who stayed in that area, most likely for training, medical care and convalescence.

Those “Yanks” like they wanted to be called, belonged to the following units:

These soldiers occupied camp sites spread amongst 31 communities and departments.

Members of student choir from commemoration ceremony last May.Sadly, during that time, some 341 American soldiers lost their lives here, and were interned in four different cemeteries, the one in Clermont-Ferrand being the largest.

The American presence in Clairmont-Ferrand remains vivid today; from the street names to honor our allies including “The Avenue of the United States”; to the fountain in the Community of Aubiere (a gift from a US Veteran in 1969), to the names of soldiers engraved in barn walls, that can still be seen, even 100 years later.

In what way is this project unique? 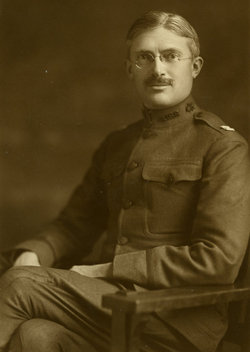 Captain Edward Lansing Satterlee was a U.S. Army Signal Corps officer during WWI. He lost his life while stationed at Clermont-Ferrand, due to Typhoid Fever.This project is supported by the “Mission du centenaire de la premiere guerre mondiale” (the WWICC counter parts in France), and is unique in the sense that it combines historical research with the work of approximately 300 students of all ages (from elementary school to high school) across all levels.

Their research work is varied and is often conceived in transdisciplinary manner. The outcome shows the diversity in which the students engaged: from writing an original song derived from the poem of Alan Seeger “I have rendezvous with death”, to drawing, photography, writers workshop, historical research, visual production, and commemorative booklet…

This effort goes way beyond the school and educational setting; as many entities partnered with us: the town hall of Clermont-Ferrand, the civil and military authorities, the Anglo-American community, and the veterans’ associations.

We have informed the US Ambassador to France, Mme. Jamie D. McCourt and the US Consul in Lyon, Mme. Rebecca Kimbrell, and they will both be invited.

What would you like/hope the public’s reaction to be?

We expect a large group of people to participate to the ceremony. 300 students and their parents are associated with it, and it will be open to the public. This is a great novelty around here, as Memorial Day has not been celebrated in Clermont-Ferrand since 1921.

Did you discover something fascinating?

Our research has led us to uncover forgotten traces of the American presence. We found old photographs of local residents of Puy-de Dome with American soldiers, unpublished private archives, such as the intriguing archive of soldier Victor Foss of the 146th Field Artillery Regiment, soldiers names still engraved on barn walls…

All these discoveries will be gathered in a book, and should be published in 2019.

Betsy Shepherd is a Spring 2018 Intern with the U.S. World War One Centennial Commission.

Yael Rosen is a volunteer with the U.S. World War One Centennial Commission. 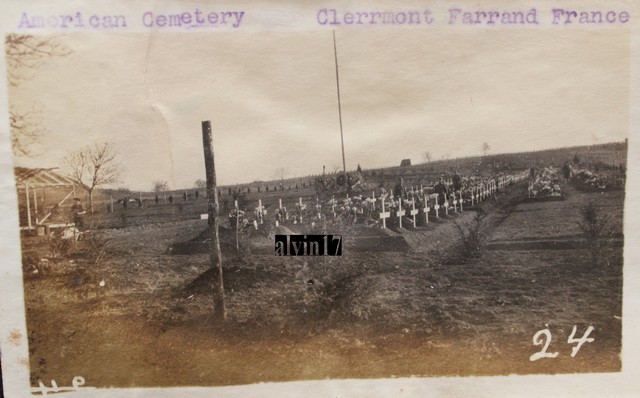 American cemetery in Clermont-Ferrand France in 1921 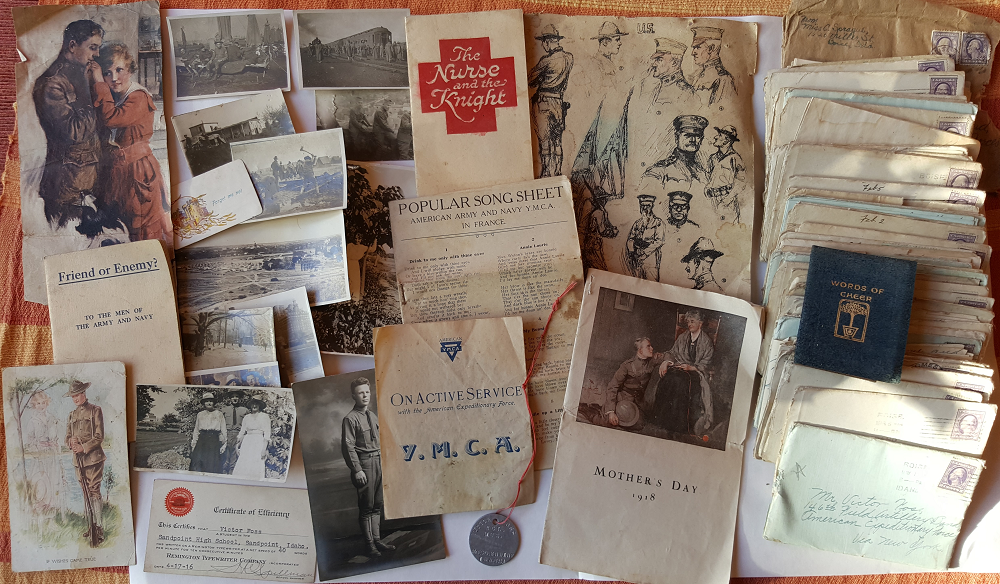 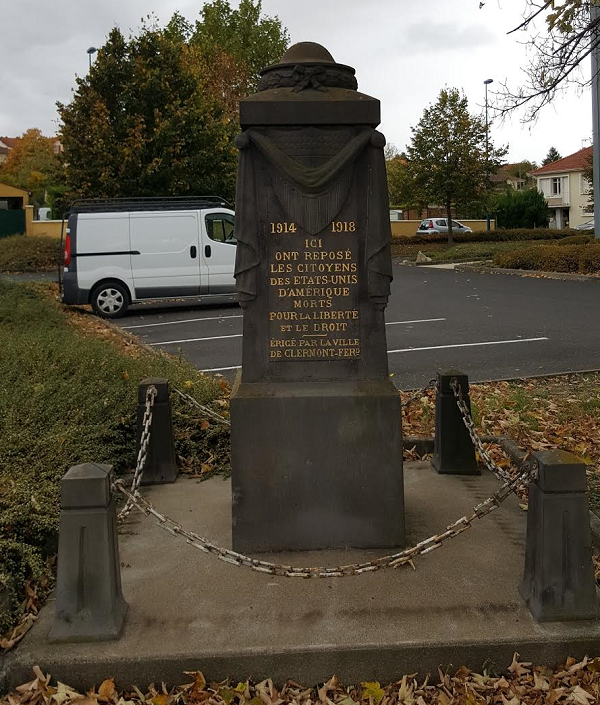