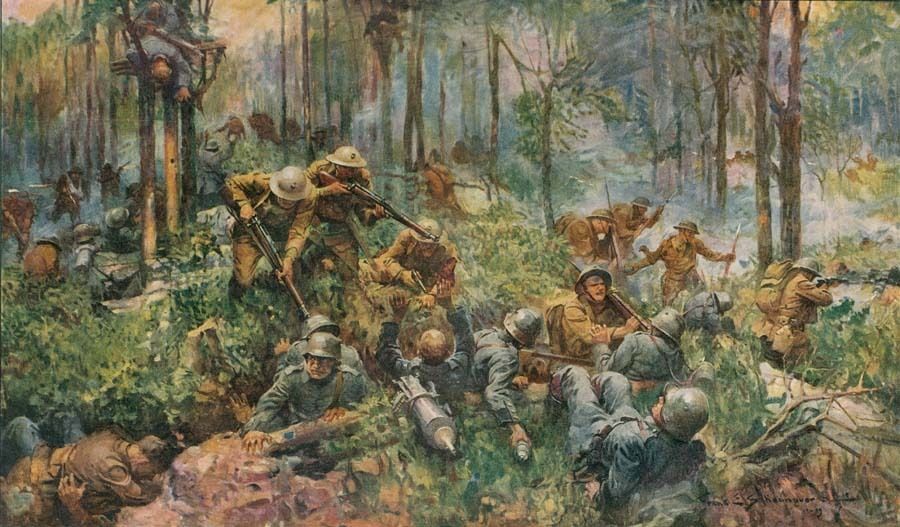 The Marines’ savage fight for Belleau Wood is depicted in Franc-Earle Schoonover’s Belleau Wood. Art Collection of the National Museum of the Marine Corps

The Marines at Belleau Wood and Blanc Mont

"Retreat, Hell! We Just Got Here!"

In 1918, World War I was in its fourth year. Imperial Russia had succumbed to the Communist Revolution and capitulated to Imperial Germany. In the West, a race against time was on. The Allies of Great Britain and France were watching with mounting concern as German armies from the Eastern Front began reinforcing those on the Western Front. Their armies, having been bled white and wracked by mutiny after three horrific years of trench warfare, were at the breaking point. The last hope for Allied victory was the United States. It had entered the war in April 1917, and its troops began arriving in France later that year.

The American forces were hastily trained for the demands of total warfare in the European model, and for the most part were equipped with a hodge-podge of weapons supplied by their allies. The question on both sides of the trenches was not if the growing number of American units would fight, but rather how well? Only combat would answer that question. Field Marshal Paul von Hindenberg and Gen. Erich Ludendorff of Germany were determined to shatter Allied resolve and achieve victory with an offensive launched before the full weight of the U.S. Army could be felt.

On May 27, 1918, specially trained “shock units” led a three-pronged offensive that smashed into the British and French lines. At Aisne, the French lines bent, then broke. In less than two days, the German army was at the Marne River at Chateau Thierry. Once again, the German army had victory within its grasp, and once again, the road to Paris, about 50 miles away, was wide open. In 1914, France, and the Allied cause, was saved by a sudden influx of troops delivered to the front by Parisian taxis – the “Miracle of the Marne.”

This time France had no miracles of her own remaining. Allied Commander-in-Chief Gen. Ferdinand Foch turned to Gen. John Pershing, commanding general of the American Expeditionary Force. Previously, Pershing had resisted releasing units piecemeal to reinforce depleted British and French divisions. He stated that when Americans fought, they would do so as a unified army.

But Pershing recognized that the present crisis overrode national considerations and temporarily released his five divisions to Foch’s command. The American 2nd Division, containing the 4th, 5th, and 6th Marine Brigades, was assigned to Gen. Joseph Degoutte’s French 6th Army, located along the Marne Front. Not since the Civil War had American troops been involved in a conflict of such magnitude. And it had been more than 100 years, at the battles of Bladensburg and New Orleans during the War of 1812, since the Marine Corps had faced an armed foe at the professional level as it did now against the 461st Imperial German Infantry regiment.