The Great War may have ended 100 years ago, but the ways in which it influences and affects the generations today are diverse and fascinating. Upon receiving the diary of his grandfather, a World War I veteran, writer and photographer Jeffrey Lowdermilk was inspired to honor the memory of George A. Carlson by traversing the same journey he took across Europe, reliving the experiences by visiting the towns, battlefields, and landscapes described in the Diary. He has since published a book describing his journey, accompanied with contemporary photographs of the places he visited as well as diary excerpts. In addition, Mr. Lowdermilk has donated several copies of Honoring the Doughboys to the Centennial Commission’s Memorial Fund. We asked him a few questions about his donation as well as the journey in his book, Honoring The Doughboys, Following My Grandfather’s WWI Diary.

You generously have donated over a score of your books to the Centennial Commission. What prompted you to do this? 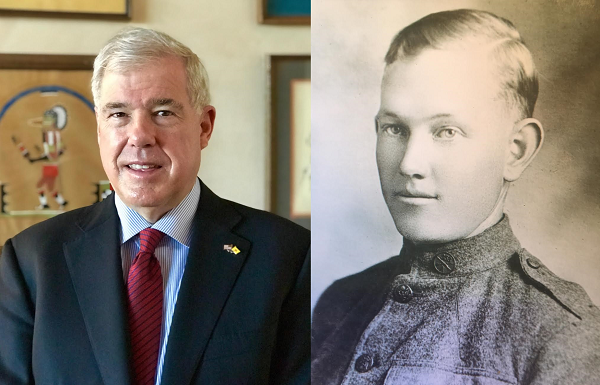 Author and photographer Jeffrey Lowdermilk (left), and his grandfather George A. CarlsonFor some time I have wanted to make a donation to Centennial Commission in order to support the World War I Memorial effort. If I just sent a check that would be the end of my participation. However, if I donated a number of my books for the Commission to sell, I would be helping the memorial effort monetarily plus getting my book out to a new audience to enjoy.

I loved your Book! Especially the excerpts from you grandfather's diary throughout. Was there anything surprising that you learned while reading it?

Beginning at ten years old or so, my Grandfather told me his WWI stories, most memorable was the original Armistice Day. However, it was not until my mid- forties that I became fascinated with his diary and consequently World War I history. As I delved into the diary, what surprised me the most is that from a trained front line infantryman he somehow aligned himself with the medical corps. During the battles and at night, in ‘no-man’s land’, he constantly performed triage and first aid to the wounded American soldiers and carried or dragged them back to the hospital tents. In the diary he proclaimed that his nickname became ‘Doc’.

He was a kind man and my feeling is he somehow found a way to contribute to the war effort so that he did not have to kill the enemy, but rather support the medical effort that save lives.

I have accumulated so many questions I wish I could ask him, but his positioning himself with the medical corps would be one of my primary questions.

You have beautiful photographs of all the locations you visited on your grandfather's & your journey. What was the most memorable of the locations/your experiences?

I have three locations and experiences that stand out as extremely special.

At two locations, I knew from where I was my Grandfather had not been somewhere in the general vicinity, but rather right where I was standing. The first was at the Stenay, France train station on the west bank of the Meuse River on November 10, 1918, the day before the Armistice. The second was in eastern Luxembourg on the Echternach Bridge, which spans the Sauer River. On Dec. 6, 1918, he and his Infantry Regiment walked over the bridge and passed into Germany for the Allied Occupation. 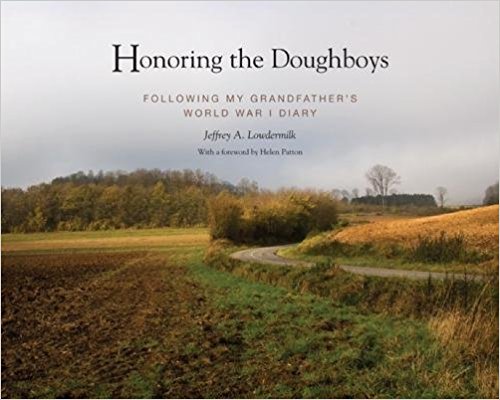 The third was in the tiny village of Philippsheim, Germany were my Grandfather spent Christmas 1918, with a German family. I was there during late June 2007 and by coincidence met ninety-two year old Grampa Johann. His grandson was our interpreter and he told me that a very surprised Grampa Johann said that when he was a young man his parents had told him American soldiers had stayed in their home over Christmas 1918, when he was a baby. We were all astonished, and knew we would never know for sure if this was the same home as Johann’s, but the three of us decided it was certainly close enough.

I read how you were in France in 2008 during the 90th anniversary of the St.-Mihiel Offensive and the Commemorative Ceremony of the Meuse-Argonne Offensive. Are you planning on returning this year for the Centennial?

However, I also give presentations about my Grandfather’s story, which are highlighted with my photographs. I have been asked to give talks to the New Mexico History Museum and the New Mexico National Guard during September and October. So in the final analysis, I decided it is so important to give back and honor these presentation requests.

How do you think your book and your journey can serve to "shine the light of awareness," as you put it, for the next generation about WWI?

My Grandfather has taken me on a magnificent journey of discovery, which I deeply wanted to share. In writing my book, I tried to make it a personal story and not to just another ponderous history book. And by combining the story with my photographs, the goal was to bring the diary to life.

My desire was that my book would reach a wide-ranging audience who normally would not read about the First World War. Several times I have heard comments such as, “Until I read your book, I had never understood World War I.”

I also set-out to encourage readers to look for the heroes in their own family histories, to listen to their elder’s stories, as well as to illustrate what can be accomplished with an ancestor’s old, dusty diary.

The pinnacle of my book’s success was that Sandra S. Pershing, great-granddaughter-in-law of General John J. Pershing, gave out forty of my books for her Christmas presents in 2016. There is no way this can ever be topped!

Caitlin Hamon is a volunteer with the U.S. World War One Centennial Commission.