Writing "Dad and Dunk in the Great War"

"I knew I wanted to dig deeper into this decades-long relationship."

There was a small trunk in our house that my husband kept telling me to clean out as it was “cluttering the basement area” that he wanted to use for his hobbies. My dad had died at age 97 in 1993 and when, after almost a decade, I finally got around to opening this trunk, I found it was a treasure trove of my dad’s WWI memorabilia. In it was the revolver (with no bullets in the barrel), WWI victory medals attesting to my dad’s participation in both the St. Mihiel and Meuse-Argonne Offensives, old maps of the Western Front in the area of Verdun, the khaki army hat and shirt, dad’s Army discharge papers, and a small, partially disintegrated, brittle envelope with something inside. 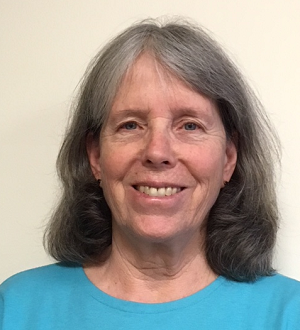 Jenifer Burckett PickerI had a feeling that the envelope contained something important. And it did! Inside was a packet of 2.5 inch by 4.5 inch white lined pages with three holes punched at the top. Written mostly in ink but occasionally in pencil was Dad’s diary from November 25, 1917, when he was sworn into service at Ft. Slocum, New York to June 14, 1922 when he left Boston on route to W. Montana. In these miniature pages, in a tiny but very readable script, was my dad’s record of his WWI service.

As I began to read these pages, I was filled with emotion. They told story of my dad’s time in WWI, and what captivated me was friendship he had formed with one of the soldiers he’d met in training camp. George Duncan ‘Dunk’ was from rural Montana and Dad, who had interrupted his studies at MIT to join the war, was from New Jersey. They became fast friends as they spent months in training camps in Maryland and then went overseas together. As I read through the diary I knew I wanted to dig deeper into this decades-long relationship.

How could I get in contact with Dunk’s family to find out more about this WWI friendship? By the early 2000s there was no chance that Dunk and his wife were alive. I knew, however, from my father’s Christmas card list that Dunk and his wife Eileen had had one child, a daughter Margaret, born in 1924. Unfortunately, women change their names when they marry so I was getting nowhere in my search for Margaret, even if she were still alive in her eighties.

In 2011, armed with my dad’s WWI diary and the photos he’d taken in 1918-19 post-war France, I decided to take a trip to Verdun to follow in my father’s WWI footsteps using the diary and photos to guide me. I had a very successful trip and located most of the sites in the Verdun area – many little changed today. But why had Dad and Dunk been in Nevers, as noted in the diary, and what had they been doing after the war ended in Verdun? It only made me more anxious to try to locate Dunk’s daughter to see if she could help put together the missing parts of the puzzle. 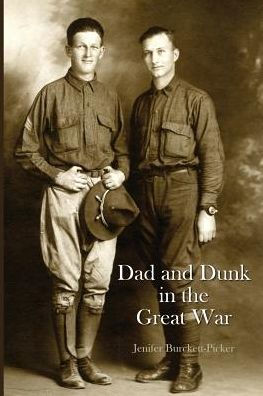 Finally, after another year of searching, I located Margaret in 2012 age 88, still living in Western Montana with most of her family (3 daughters and many grandchildren and great-grandchildren). Her son, Duncan, Dunk’s grandson was living, however, on Cape Cod – not far from Boston. In early 2013 Duncan – who was the keeper of all of Dunk’s WWI memorabilia – and I met and exchanged war stories. He granted me access to all of Dunk’s WWI letters to his then girlfriend later wife, Eileen.

In 2014 Duncan invited me to accompany him and his family to Missoula, Montana to celebrate his mother Margaret’s 90th birthday. I was thrilled to finally meet Dunk’s daughter and the rest of the family.

In 2015 I realized that if I were ever to write about Dad and Dunk in WWI that I needed to get busy so that I could have it published by 2018, the 100th anniversary of the Armistice of WWI. I started to write and dig into US Army and US Army Corps of Engineers archives. Soon I realized that I needed to take another research trip to France. So in June 2017, armed with Dunk’s letters to Eileen, which told more of the story of what Dad and Dunk were actually doing in 1917-19, in addition to Dad’s more succinct diary and spectacular 100 year old photos, I again went to Verdun, but also to Brest and Nevers.

In Brest, where Dad and Dunk had, like so many thousands of other young soldiers, spent a week in the Pontanezen Barracks before going on to the Front, I was met by the president of the local historical society. Yves Coativy showed me around the site of Camp Pontanezen, as well as the harbor area where almost 800,000 soldiers of the American Expeditionary Forces had landed in 1917-18. He told me about the history of Brest during those years.

I then went on to Nevers, where Dad and Dunk had spent four months from May to August of 1918. I was curious to find out more about why they had been there. And voila, after speaking with Lt. Col. Pierre-Eric Durand and historian Jean-Francois Jondeau I learned about the “Nevers Cut-Off” (or in French “La ligne americaine”) – the most important American railroad construction project in France during WWI. It linked the railway route from Brest and the Atlantic ports to the route going to the Western Front without going through the crowded and small railway station in Nevers. It thus cut off the bottleneck of Nevers and gave the AEF a dedicated rail line for shipping men and war materiel more efficiently to the Front. This mammoth 5.5 mile cut-off was built, including a 2000 foot bridge across the Loire River, in just four months of backbreaking labor by five engineering regiments, including Dad and Dunk’s 23rd Engineers.

Then it was on to the Front in Verdun, as I followed Dunk’s letters and Dad’s diary. One of my goals was to find the dugout at Verrieres Farm in the Argonne Forest where my father had lived in October-November 1918, just before and just after the Armistice. I had tried to do so in 2011 but without success. In 2017, armed with an old 1918 map of the Argonne Forest area, I was able to locate the farm, speak with it owner about its history, and finally to be shown the dugout in the forest not far away from the farm buildings. It was still standing, covered with bushes and vines, and it was with a sense of reverence that I entered this humble abode that had sheltered my father 100 years ago.

Back in the U.S. once again with much more background information, I balanced my WWI writing with my full time day job so that by October 2017 I had a draft manuscript. The book, Dad and Dunk in the Great War was finally published in May 2018 and is available online through both Barnes and Noble as well as Amazon. 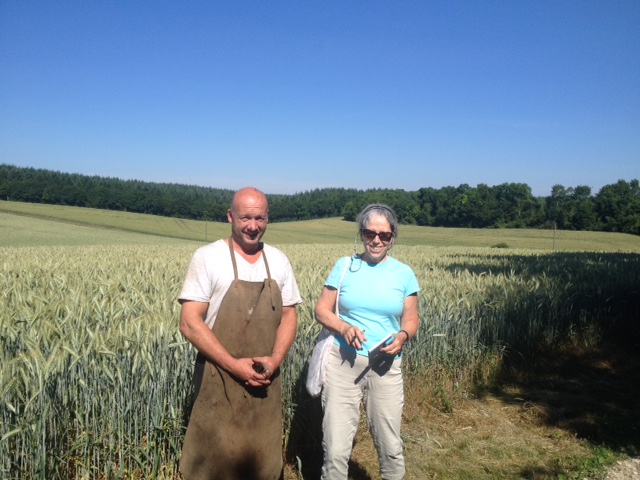 Jenifer Burckett-Picker with the owner of Verrieres Farm in the Argonne Forest,telling her the history of the farm and how her father would have been living not at the farm but in a dugout in the woods behind them in WWI. 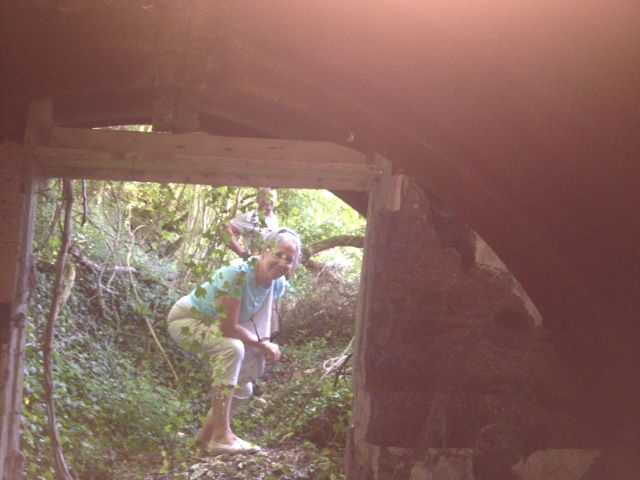 Jenifer Burckett-Picker emerging from the dugout near Verrieres Farm in the Argonne Forest where her father lived during World War I. 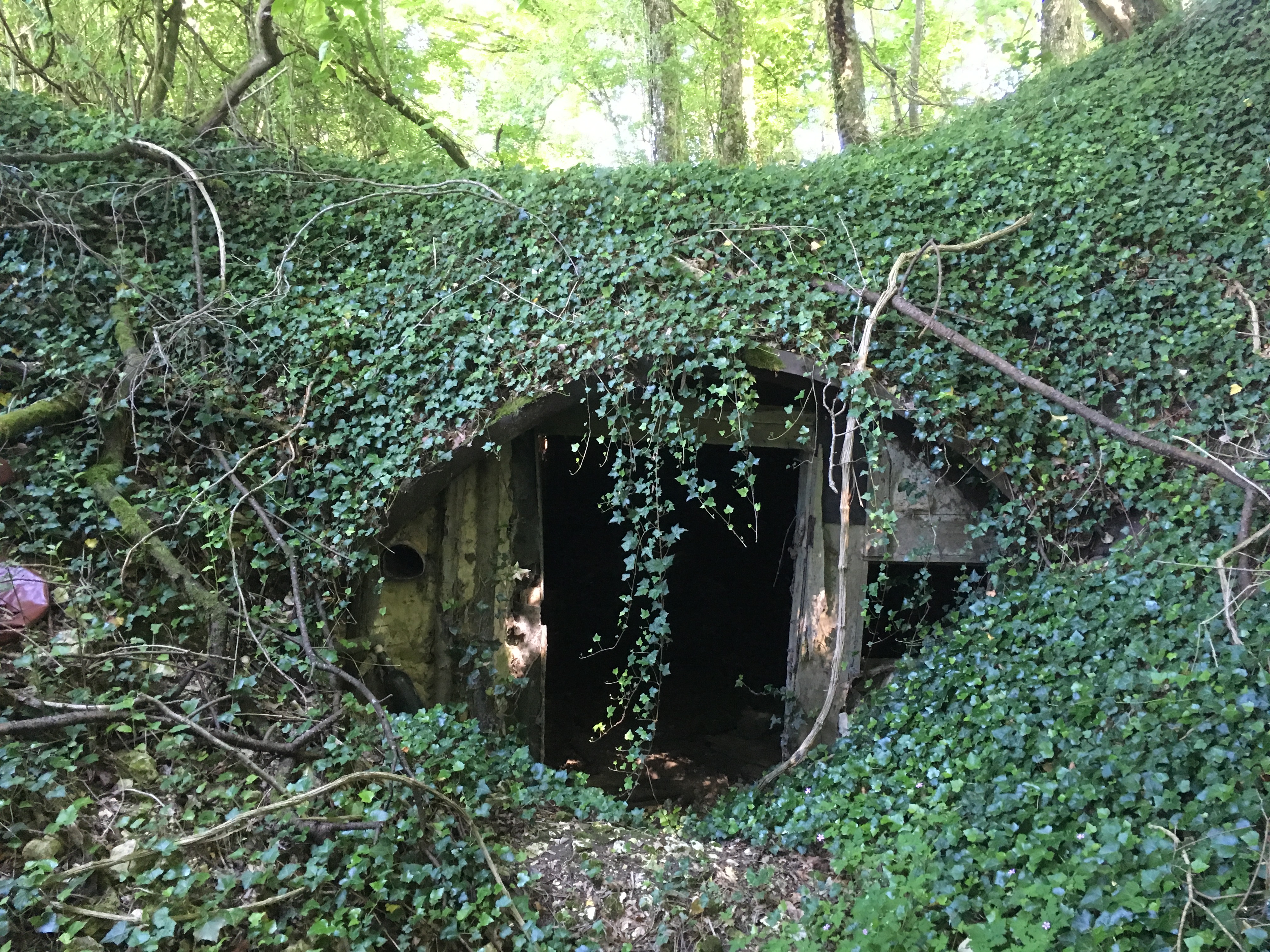 The dugout near Verrieres Farm in the Argonne Forest where Jenifer Burckett-Picker's father lived during World War I, remarkably still preserved to this day.