Warriors in Khaki: Wyoming Indian Doughboys in the Great War

The Wyoming Veterans Memorial Museum opened the Cowboy State’s Centennial Exhibit on “Wyoming in the Great War” on April 6, 2017. Among the myriad topics studied in preparation for this exhibit, was the service of Wyoming Indians in the Great War, particularly from the Arapaho and Shoshone Nations on the Wind River Reservation.

While performing this research, we encountered Fullerton Leonard Waldo, a civilian service worker who helped Doughboys in France, who published a book on his experiences in 1918, entitled: “America at the Front.” Waldo wrote, ““Red Indians from Wyoming or Colorado were stoics of the high explosive shells and the poison gas as if the calumet went round at the council-fire or the drums beat to a dance.” This quote, rightfully considered racist and degrading today, was still valuable, for Waldo had clearly seen Indians from Wyoming fighting on the Front Lines of France. This quote served as the impetus to begin our museum’s effort to comprehend the role played by Indian Doughboys from our State. 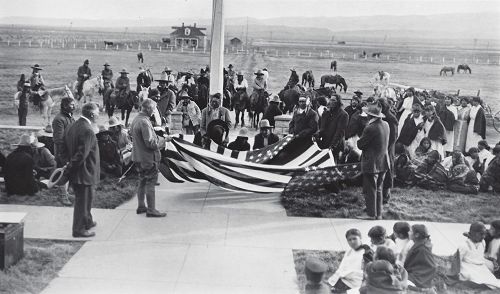 The 1913 Citizenship Expedition at Wind River Indian Reservation, October 11, 1913 - Wanamaker Collection, Mathers Museum of World Cultures, Indiana University, Bloomington, IndianaThe Eastern Shoshone Treaties of 1863 and 1868 established the Wind River Reservation for the Shoshone Nation, in the heart of the Wind River Valley in central Wyoming. Fort Washakie was established by the U.S. Army to safeguard the Reservation and serve as the Shoshone Agency. The Shoshones were steadfast supporters of the United States, and Chief Washakie led as many as 160 warriors to join General George Crook at Clear Creek (modern Sheridan) on June 14, 1876- Chief Washakie’s men would fight with skill and courage at Rosebud Creek three days later.

When the Arapahos had been forced to yield to reservation life following the Great Sioux War of 1876, Chief Washakie permitted them to settle on Wind River Reservation, so that they could remain in their beloved Powder River country. Fort Washakie had only been closed as a U.S. Army installation as late as 1909. The 1913 Population of Wind River Indian Reservation was relatively small – a mere 1,697 from both tribes, men and women.

Wind River demonstrated its patriotism to the United States by hosting the 1913 Citizenship Expedition on October 11, 1913. In a patriotic ceremony, Arapaho and Shoshone Chiefs signed “A Declaration of Allegiance to the Government of the United States by the North American Indian” and received a large United States colors that flew over the Reservation for years.

Although relatively poorly documented, Indians from the Equality State supported the American entry into the Great War enthusiastically. To date, our Museum has identified six Indian Doughboys from Wyoming, by name.

Private Arthur B. Ried, 13th Field Artillery, 4th Division – this man was a Navajo who enlisted in Sheridan, Wyoming- we believe that he was an itinerant worker, likely at a Sheridan County ranch, who joined the service from where he was working. We know nothing more about this man’s service or life.

Bugler Carl Burnaugh, a Shoshone from Wind River Indian Reservation, Wyoming. Born in 1898, Died in 1975, buried in Riverton, Wyoming. He served from October 7, 1917 to December 15, 1919, but we know nothing more about this man’s service or life.

Burt “Yellow Nose” Addison, an Arapaho from Wind River Indian Reservation. Born in 1897, Died in 1965. We know nothing more about this man’s service or life.

Sergeant Roy Shade Large, Veterinary Detachment, Company D, 4th Engineers, Shoshone from Wind River Indian Reservation, Wyoming. Sergeant Shade was born in Sweetwater County, Wyoming on October 28, 1892. As a boy, he attended Carlisle Indian School, Carlisle Barracks, Pennsylvania. He enlisted in the U.S. Army on June 4, 1917 and was honorably discharged in August 1919. He died on August 22, 1977 and is buried in Wheatland Cemetery, Wheatland, Wyoming. Because of our Museum’s research, Wheatland is now marking his grave as a World War I Veteran.

Private John Washakie, U.S. Army, Fort Casey, Puget Sound, Washington. John Washakie was born on July 19, 1899 in Fremont County, at Fort Washakie on the Wind River Indian Reservation. A Shoshone, he was a grandson of the renowned Chief Washakie. He attended Fort Sill Indian School, Fort Sill, Oklahoma. A Coastal Artilleryman responsible for defending our nation’s shores, he died at Fort Casey, of “Acute Pulmonary Tuberculosis” on May 13 1918. He is buried in Sacajawea Cemetery, Fort Washakie, Wyoming. 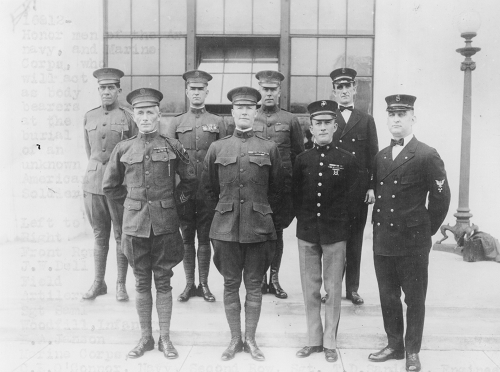 BODY BEARERS FOR THE UNKNOWN SOLDIER, 1921. Thomas Daniel Saunders is at Left in the Rear Rank. Note that he is wearing his Croix de Guerre. Official Marine Corps Photo #521814, National Archives and Records AdministrationWyoming’s most famous Indian Doughboy was Corporal Thomas Daniel Saunders.

Thomas Daniel Saunders, Company A, 2nd Engineers, 2nd Division, was a Northern Cheyenne born in Medicine Bow, Wyoming on April 28, 1892. Our museum tentatively believes that he had Arapaho family on the Wind River Reservation. He enlisted in Cheyenne in June 1917, as soon as Indians were authorized to enlist in the U.S. Army. Assigned to the Combat Engineers, he first saw action and was wounded at Chateau Thierry in July 1918. Corporal Saunders was the recipient of the Distinguished Service Cross for heroism in action at Jaulny, France on September 12, 1918. With another soldier, Corporal Saunders cut his way through a barbed wire entanglement, led the advance into the Chateau of Jaulny, and captured 63 Germans! He was the recipient of the Croix de Guerre (with Gold Star) for leading a patrol under heavy fire on October 8, 1918 at St. Etienne-a-Armes (Blanc Mont), France.

His commanding officer noted of Corporal Saunders: “This soldier has shown himself under trying situations to be far above his comrades, in all operations requiring alertness, coolness, and dependability, backed by fearlessness.” Corporal Saunders served as one of the six Body Bearers of the Unknown Soldier at the Dedication Ceremonies at the Tomb of the Unknown Soldier on November 11, 1921. He was handpicked by General of the Armies John J. Pershing to represent the U.S. Army Corps of Engineers.

Corporal Saunders remained in the U.S. Army, he was on active duty at Fort Riley, Kansas in 1920, and by 1930 was a Staff Sergeant at Fort Logan, Colorado. By 1940, he had been discharged from the U.S. Army and was living in Los Angeles, California, where the Los Angeles District, U.S. Army Corps of Engineers throughout World War II employed him. Corporal Saunders died at Los Angeles, California on November 15, 1947. Sadly, he had “no known relatives” and was buried at Golden Gate National Cemetery. 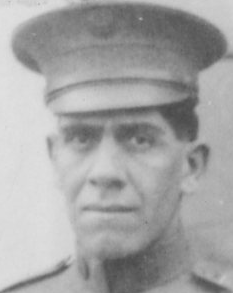 Corporal Thomas Daniel SaundersCorporal Saunders was Wyoming’s most decorated Enlisted Soldier of the Great War, one of 150 Indian Doughboys to be decorated for valor, and one of only ten Indian Doughboys to be awarded the French Croix de Guerre. As a Body Bearer for the Unknown Soldier, we have to speculate regarding what his thoughts were as an Indian being awarded this great honor, and particularly what his thoughts were as Chief Plenty Coups of the Crows placed his war bonnet and coup stick atop the coffin of the Unknown Soldier, with these words: “I feel it an honor to the red man that he takes part in this great event, because it shows that the thousands of Indians who fought in the great war are appreciated by the white man.”

Wyoming’s contributions by its Indians towards winning the Great War was not limited to its Doughboys. As with reservations throughout the nation, Indians from Wind River knit clothing and rolled bandages for soldiers, bought war bonds, and supported the Red Cross and YWCA.

The Shoshones on Wind River brought 1,000 new acres into cultivation to support the war agricultural effort in 1917, a considerable effort given the harsh soils of Central Wyoming!

Corporal Saunders and his fellow Indian Doughboys from Wyoming had already benefited from their service, as the American Indian Citizenship Act of 1919 had granted U.S. citizenship to all honorably discharged Indian veterans. And his services, along with all the Shoshones and Arapahos of Wind River and other Nations throughout the United States, resulted in the Indian Citizenship Act of 1924 (the “Snyder Act”) granting full U.S. citizenship to all Indians on June 2, 1924.

The mission of the Wyoming Veterans Memorial Museum is to ensure that the service and sacrifice of our state and nation’s veterans is not forgotten. Sadly enough, Corporal Thomas Daniel Saunders nearly vanished from the rolls of history. Recent exemplary scholarship by Patrick K. O’Donnell in The Unknowns (Atlantic Monthly Press, 2018) and this museum’s exhibits have concurrently retrieved the story of an exceptional Warrior in Khaki.

And additional research is ongoing at this museum…. 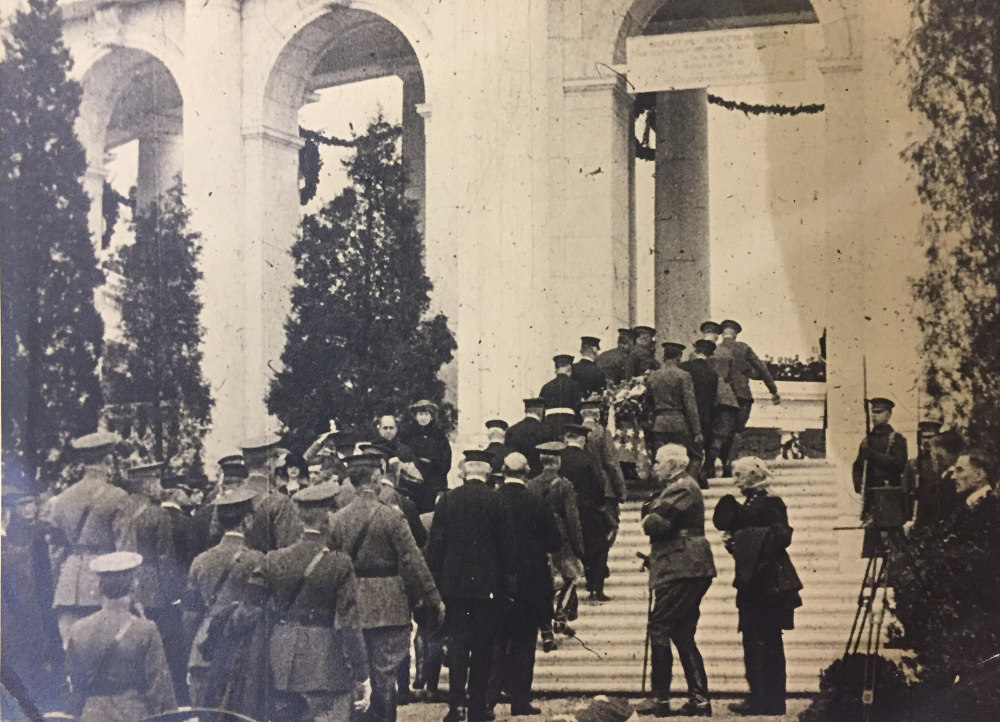