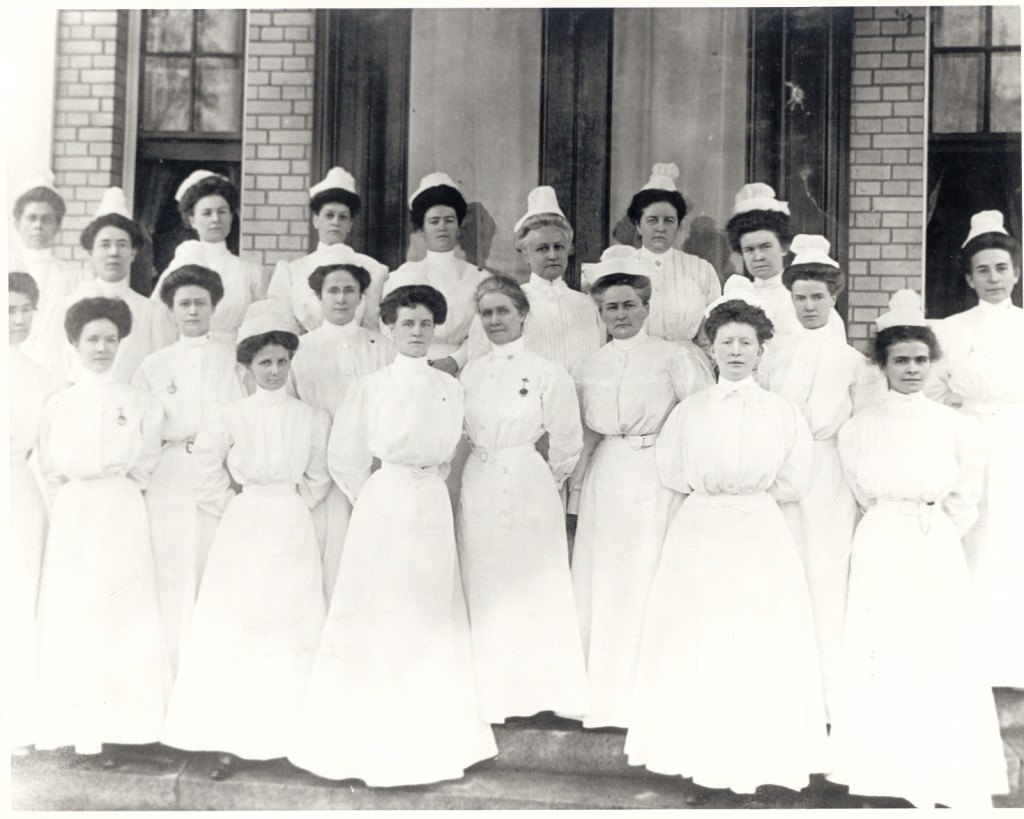 The Sacred Twenty -- the first twenty nurses accepted as a part of the Navy Nurse Corps in 1908.

Navy Cross Nurses: Inspiring Heroism During the Influenza Epidemic of 1918

On the front lines during World War One women often were seen as the ultimate caretakers, that allowed men to continue to fight after being wounded. The army was the first branch of the military to allow women to serve as nurses and receive proper recognition for their service. On May 13, 1908 the US Navy followed suit after the United States Congress passed the Naval Appropriations Bill. On that fateful day the “Sacred Twenty” became the first official female nurses of the United States Navy.

The “Sacred Twenty” refers to the first twenty nurses who originally had begun taking exams in order to be a part of the Navy Nurse Corps at the time. Two women, Ester Hasson and Leanah H. Sutcliffe Higbee, were the first two official members of the corps and continued to be the core of the organization throughout World War One. Hasson was the first chief and Higbee was the second superintendent.

These women would eventually lead over 1,500 women as active duty nurses during World War One. Only four of these women were ever awarded the Navy Cross for their courageous service; only a startling number of eight recipients in total during the war.

The Spanish Influenza, as it was incorrectly named, was an international pandemic that occurred during the First World War. Now it is known that the “Spanish Influenza” was really just regular influenza, but because of the bloody mucus that filled the lungs (image two), it was believed to be a new strain. Today it is known as the 1918 influenza pandemic and the result of this epidemic was a massive loss of life; between 20 million to 50 million people died due to the rapidly spreading disease. Patients died due to blood filled lungs; the result of pneumonia brought on by the influenza compromised immune system. Unlike previous outbreaks where the very young and very old were the most susceptible to lose their lives while fighting, in this outbreak people ages 15-40 were the most likely to succumb to the disease.

Influenza began traveling via the sea ports and on September 7th 1918, the first ship carrying an influenza infected passenger docked at the port. No one was prepared for what was about to happen[1]. Over 25% of Philadelphia’s nurses and doctors were overseas during the outbreak of the pandemic[2]. This caused a lack of medical professionals to be able to treat the disease in America. In addition, false information about the disease was originally prevalent. Citizens as well as military personnel were informed by health and government officals that the influenza would have no effect on them, down playing the On September 28, 1918 over 200,000 attended the Liberty Loan Drive. While raising over six hundred million dollars in war bonds, the people of Philadelphia also ended up spreading the disease they had previously been informed not to worry about. Within three days of the event over 600 new cases of influenza were reported.[3] Officials were forced to remedy their mistake and they finally admitted that the influenza was indeed a rapid, growing and serious killer. After the announcement, schools, churches, and other places of social gathering were closed to prevent further infections. 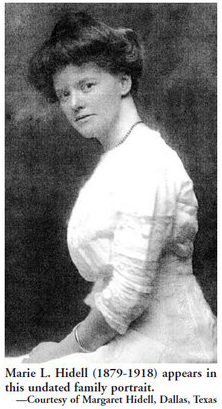 Since the beginning of the influenza outbreak, two Navy Nurses responded to the emergency in Philadelphia; Edna E. Place and Marie Louise Hidell. Nurse Edna E. Place graduated from St. Timothy’s hospital nursing program roughly a year before the outbreak, on May 11, 1917. She was placed on active duty in June of 1918, and served at the Navy Hospital in Philadelphia.

On September 25, Ms. Place took sick while taking care of patients. While reports vary, her death certificate states she died at roughly 9:30 PM on September 29, 1918. She worked relentlessly as a nurse and ultimately contracted the very disease she was trying to protect her patients against. She was buried in Northwood Cemetery located in Berks County, PA.

After graduation in 1891, Marie Louise Hidell worked mainly in privatized hospitals throughout the city, but with the urgent call to service she signed up to become an active duty Navy Nurse. Like so many others, Ms. Hidell began her call to service at the naval hospital in Philadelphia, just as Ms. Place did. While working at the naval hospital, she reportedly told those who cautioned her about the disease that they should not worry about her because she saw herself as immune to the disease.[4] Most notably she is revered for admitting 188 patients in one night as no one else would or could at the time.

The last line of her obituary states: “she was the first nurse to die in the service”.[5] This information leads many to believe that she would have passed just before Edna Place. It is unknown whether the two nurses would have shared a hospital room. In section 17 of their death certificates, two different names are signed claiming to be the last affiliated with the women. Both death certificates were official on October 1, 1918 just two weeks before the nation would see the outbreak claim 2,600 people in Philadelphia alone.

General Headskin, commander of Camp Lee, was more concerned about his soldiers training abilities rather than their overall health. Many were forced back to training prior to making a full recovery.

On September 28, it was realized that those who received their incomplete treatment were still infected and carrying the disease with them while they traveled into Richmond. With hundreds of cases throughout the Richmond public, people scattered in order to maintain the illusion of safety and Camp Lee canceled all events for both healthy and sickly soldiers[6]. 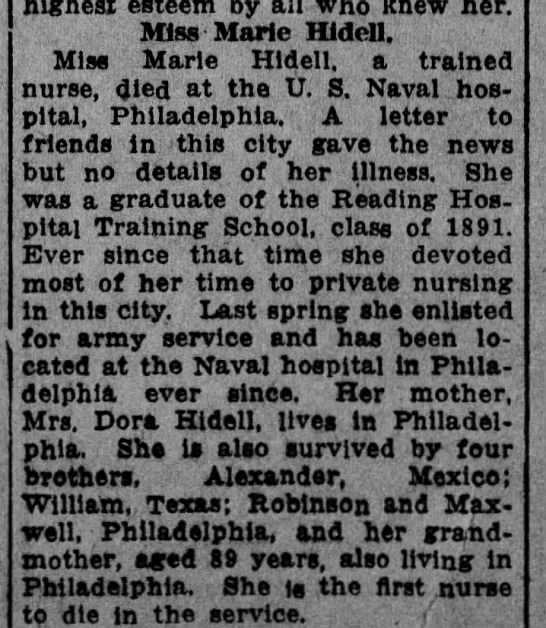 Marie Louise Hidell obituary; in the last line it reads first nurse to die in serviceThe camp officials continued to push public education in order to prevent the spread and schools and other social gathering places were shut down by October 6. Because of the danger only 75 nurses were brought up to help those in need at both Camp Lee and Richmond.

A short distance away was the Naval Operating Base in Hampton Road Virginia, the acknowledged dispatch spot for those traveling overseas. In early September, initial reports of influenza were seen at the naval base and by the end of September the flu dominated the news. Almost 9,000 cases of influenza were documented in Norfolk and by October 8 at least 3,500 of these were on the base. At the end of the year almost 1,000 deaths were reported by health officials in the area, but it is suspected the number was far more substantial as many did not seek out medical care.[7]

Among the deceased were Navy Nurse Lillian M. Murphy. Ms. Murphy was an unusual case when it came to naval nurses. Born in Canada, not much information is known about her. Murphy would have been one of the first to fall ill, her death certificate states that her illness first began on October 2nd, 1918. Unlike the other nurses who had perished, her death is simply marked as pneumonia, not pneumonia brought on by influenza. She passed away on October 10, 1918, only 13 days earlier she had celebrated her 31st birthday.

All of the women, Lillian M. Murphy, Edna E. Place, Marie Louise Hidell, and Leanah H. Sutcliffe Higbee, were eventually acknowledged for their service during the influenza outbreak. Murphy, Place, and Hidell received the Navy Cross posthumously and Higbee was alive to accept the award on November 11, 1920, one of the first Armistice Days. They were awarded this high honor for their tremendous service and sacrifice while caring for those who fell ill during the 1918 epidemic.

Leanah Higbee is buried in Arlington National Cemetery and even had a naval ship named in her honor. The other three women have been lost throughout time and only recently their stories have started to resurface. In addition, Marie Louise Hidell was gifted a new headstone after it was rediscovered in 2016.

Miranda Halpin is a Summer 2018 Intern with the U.S. World War One Centennial Commission.

[1] Influenza primarily travelled via the sea ports, it began in Philadelphia with one individual passing away after the first ship docked.  Public service announcements in regards to the “new” disease were posted by doctors. However, strangely enough these announcements, by doctors and public health officials, stated that the disease wasn’t “as bad” as everyone was making it seem, often downplaying the severity. And officials declared that there were no fatalities in Philadelphia, even though by the end of October 1918 over 12,000 had perish tragically at the hands of this disease. Overall, in the four month course the disease ran throughout Philadelphia, a third of the population would become infected and over 16,000 would never recover. http://philadelphiaencyclopedia.org/archive/influenza-spanish-flu-pandemic-1918-19/

[6] On Friday the 13th in September of 1918 the first soldier infected with influenza was admitted into the Camp Lee infirmary. Perplexed, doctors there would document him as suffering from a severe respiratory disease. Within hours ten more people were admitted into the infirmary and doctors finally declared it was influenza for those infected. By September 19, over one thousand people admitted in the Camp Lee infirmary all of which had influenza. With more people ill than the capacity readily available those who were ill were sent back into their own barracks. Those in charge of the camp shut down all social halls in order to contain the epidemic facing the camp as well as implemented strict rules, such as walking with gauze over your mouth if you were ill and  having hung bed sheets over a sick person’s bunk, in order to prevent further spreading of the disease.  http://www.influenzaarchive.org/cities/city-richmond.html#