Update from the States: An Interview with the Delta Cultural Center's Drew Ulrich

In July 20th's WW1 Centennial News Podcast, Episode 81, Drew Ulrich, the curator of the Delta Cultural Center in Arkansas, spoke with host Theo Mayer about a new exhibit honoring Delta region residents who served in the Great War. The following is a transcript of the interview:

Theo Mayer: For our updates from the States, we're headed to the wonder state, Arkansas. There, a new exhibit opens for the Delta Cultural Center in Helena, Arkansas: Over Here and There, The Sons and Daughters of Arkansas' Delta at War, honoring the men and women of the Delta area who served in World War I. With us to tell us more about the exhibit and the World War I legacy in the Delta region of Arkansas is Drew Ulrich, the curator of the Delta Cultural Center, a state museum with a mission to preserve and present the rich and varied cultural history of Eastern Arkansas. Welcome, Drew.
Drew Ulrich: Thank you so much, Theo.
Theo Mayer: Great to have you. Drew, can you help us understand exactly what the Arkansas Delta is? 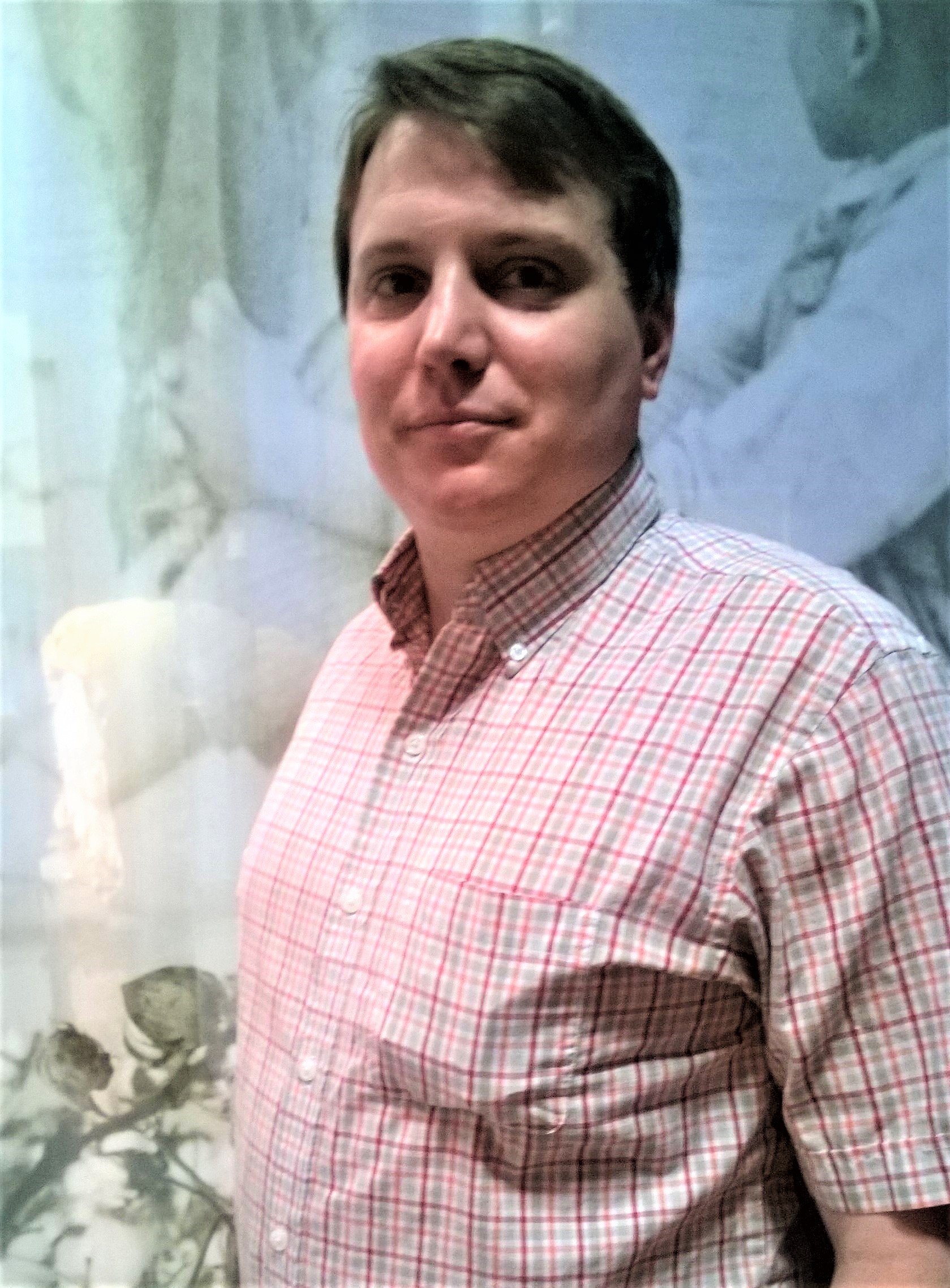 Drew Ulrich is Exhibit Curator at the Delta Cultural Center
Drew Ulrich: Basically, what defines the Delta is the reach of the Mississippi's tributaries, large and small, into the state. So you should imagine the eastern third of the state. It's comprised of about 27 counties.
Theo Mayer: Now, tell us about the Delta 100 years ago. What was it like? And tell us about the wartime service of the men and women from there.
Drew Ulrich: Well, predictably, the main economic sectors were lumber and agriculture. It was an incredibly rural landscape. The few cities in the area were Helena, Jonesboro, and Pine Bluff. A lot of lumber mills existed in those towns, and they turned out a lot of wood that would become rifle stocks for the Army and Marine Corps. There was a very enthusiastic response to the declaration of war and to enlistment. And the first officer wounded in the war was actually a Delta man from Lonoke County, Lieutenant Heber McLaughlin.
Theo Mayer: Drew, if I come to the exhibit, what am I gonna see? 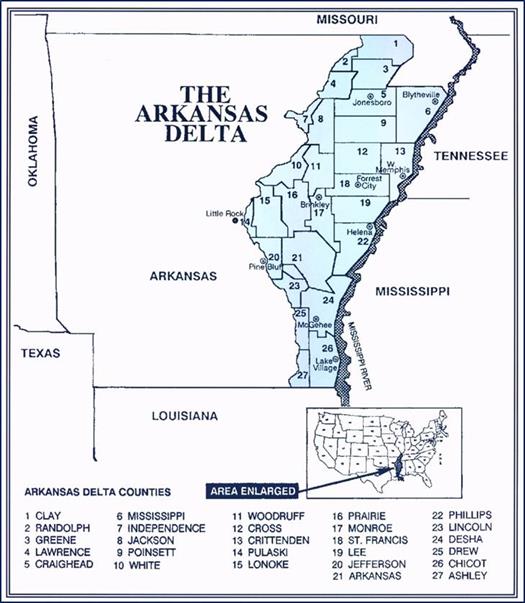 The counties that make up the Arkansas Delta region
Drew Ulrich: Our exhibit, Over Here and There, illustrates through texts, images, and artifacts, the advent of American involvement in the war, and the impressive contribution of the people of Arkansas in the Delta region. The exhibit underscores the men who served as soldiers, Marines, and sailors, and the women who enlisted as military nurses and clerks, both stateside and overseas. The enterprise begins with a synopsis of local communities embracing the declaration of war, and then it reflects on how recruitment and enlistment unfolded locally, especially the implementation of the draft instituted by the Selective Service Act. Excerpts of letters sent home from servicemen of the Delta region are featured throughout most of the sections, describing veterans' experiences. The succeeding sections discuss the adjustment of Arkansas soldiers to fighting on the front in France, followed by the finale of combat and reaction to the armistice, and the journey back to Eastern Arkansas. The final section addresses commemorations of the war and its significance today, featuring contemporary images of memorials erected throughout the region to honor local veterans. The section also recalls the turmoil veterans and residents experienced alike in the war's aftermath, including economic depression, unemployment, the new deadly enemy of the Spanish flu, as well as extreme racial violence. And finally, to further distinguish veterans' different and similar experiences during the war, I profiled three vets from the region and their individual stories so that a visitor can follow them through the exhibition: a US Army nurse, Suzy Almer, who led nursing staff at Camp Pike, private first class Herman Davis, a soldier whom Pershing identified as,"the fourth most indispensable soldier in the American Expeditionary Force," and finally, Private Frank Moore, an African-American farmer drafted late in the war, who after his discharge, found himself embroiled in hostilities at Elaine.
Theo Mayer: Well, it's pretty darn comprehensive, I have to say. I think you left no stone unturned from pre-declaration through post-war trauma. 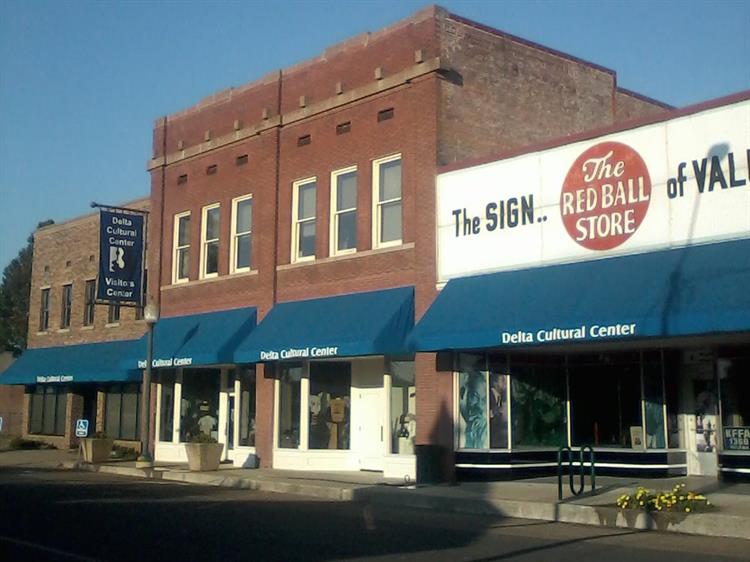 Delta Cultural Center visitor center, located in downtown Helena, is the home of Over Here and There
Drew Ulrich: I did my very, very best.
Theo Mayer: How's the reception been? What kind of audiences are you getting?
Drew Ulrich: Well, we had a wonderful grand opening in early May, in which Senator Boozman's military liaison gave remarks and I introduced the exhibit. And the reception's been very upbeat and positive, and I'm really excited to get more and more traffic as time elapses. It's going to be up until February next year.
Theo Mayer: Perfect. Well, Drew, thank you so much for coming in and telling us about it.
Drew Ulrich: Oh, yes, yes, I'm glad to share it, and I appreciate this chance to talk to you about it.
Theo Mayer: Drew Ulrich is the exhibit curator at the Delta Cultural Center. Learn more about their exhibit, Over Here and There, by following the links in the podcast notes.