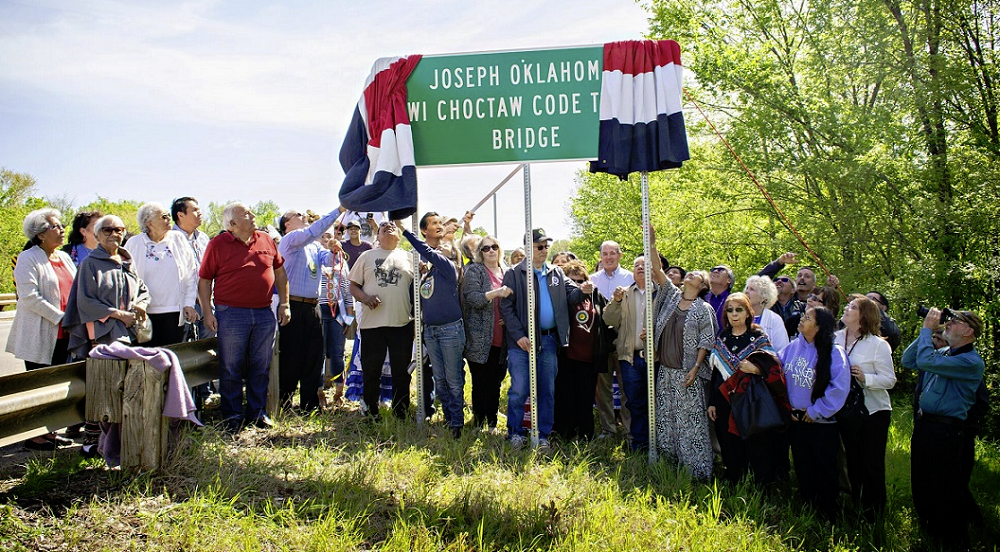 via the ChoctawNation.com web site

The Choctaw Nation made history earlier this year with the dedication of the Joseph Oklahombi World War I Code Talker Bridge in McCurtain County, Oklahoma. 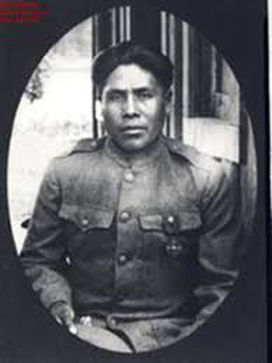 This is the biggest bridge undertaking in the history of the Oklahoma Department of Transportation,” said Nuchi Nashoba, president of the Choctaw Code Talkers Association.

For two years the association has worked closely with ODOT, the Oklahoma Legislature and the Choctaw Nation to complete this effort to honor those American soldiers who changed the course of the wars by using their Native language to communicate on the front lines. Choctaws were the first to use their spoken words over radio in combat in World War I.

“This is to keep our history alive and to remind people of the sacrifices they made for our freedom,” said Chief Gary Batton.

The ceremony got underway Thursday morning at the Choctaw Nation Community Center in Wright City. An estimated 300 people were in attendance, including descendants of the heroic veterans. Immediately after the ceremony at the center, a caravan of vehicles traveled to a sign unveiling at Horse Head Creek. The bridge location is where State Highway 98 crosses over the creek, 1.4 miles east of Wright City.

Among those attending the event were the Choctaw Tribal Council, tribal members, local city and county and state officials.

Both Chief Batton and Nashoba, who has recently read a portion of Dr. William C. Meadows’ 435-page manuscript documenting the Choctaw Code Talkers, took note of a story about Oklahombi.

Read the entire article on the ChoctawNation.com web site.