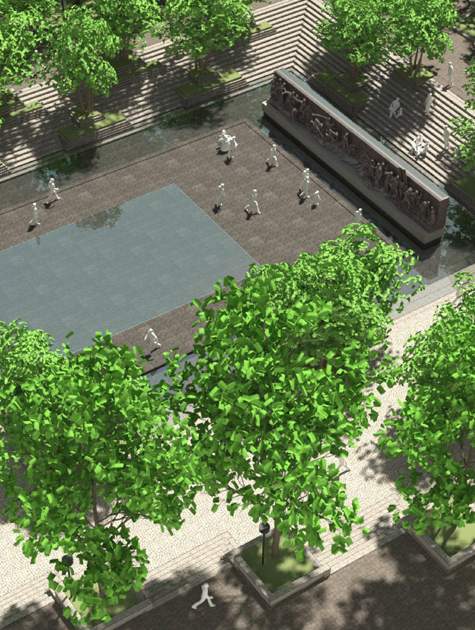 Aerial view of the approved conceptual design for the National WWI Memorial at Pershing Park / World War I Centennial CommissionIn a circumscribed win for backers of a new national World War I memorial at the site of Pershing Park in Washington, D.C., the U.S. Commission of Fine Arts (CFA) unanimously granted their support to the latest conceptual design for the memorial at their July 19 meeting.

The revised proposal was presented by David Rubin, ASLA, principal of Land Collective, who joined the World War I Centennial Commission (WWICC) design team in 2017. Other members of the team include architect Joe Weishaar, GWWO, and sculptor Sabin Howard.

The project has generated controversy due to its location at Pershing Park, which was designed by ASLA medal recipient M. Paul Friedberg, FASLA. The park, which opened in 1981, has fallen into disrepair in recent years as maintenance funds have been cut.

The Cultural Landscape Foundation (TCLF) and others have argued the park has historic value and should be rehabilitated as part of any memorial construction, arguing that the park can accommodate new memorial elements without fundamentally altering Friedberg’s original design. The National Park Service (NPS), which operates the park, determined in 2016 the park was eligible for listing in the National Register of Historic Places, calling it “an exceptional example of a landscape design of the modern period.”

Backers of the new memorial have pointed to their Congressional mandate, which specifically designates Pershing Park as the site for a national WWI memorial, and have argued that preservation concerns should not take priority over an act of Congress. They have also emphasized that WWI is the only major conflict whose veterans are not memorialized in the nation’s capital.