WASHINGTON — America's entry into World War I began with a year-long buildup beginning in April 1917. By late spring and early summer of 1918, that buildup was nearly complete.

In response, the Germans launched a series of offensives, desperate to defeat the French, British and other allies. But ultimately, they would be overwhelmed with the addition of fresh American troops and firepower, according to Brian F. Neumann, a historian at the Center of Military History who compiled the pamphlet: "The U.S. Army in the World War I Era." 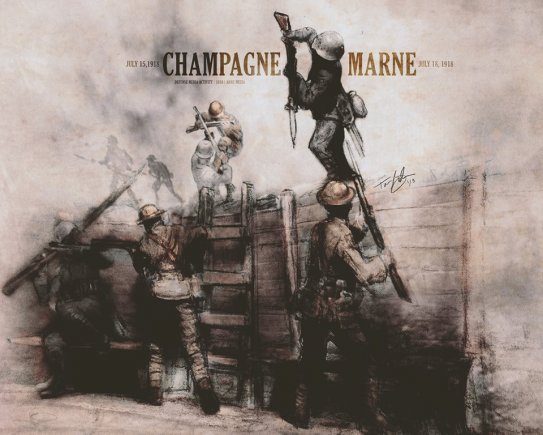 One of the final German pushes occurred in the early morning hours of July 15, 1918, in the Champagne-Marne area of northern France, where German assault troops and artillery pounded the U.S. 3rd Division lines.

The weight of the attack came against Col. Edmund Butts' 30th Infantry and Col. Ulysses Grant McAlexander's 38th Infantry. After heavy fighting in the morning, when the 30th Infantry "inflicted horrendous casualties" on the Germans, Butts' men were forced back to a line along the hills where they stopped the Germans.

Turning some of the regiment to defend that flank, McAlexander also had to deal with a penetration of his main line. Although fighting on three sides, the riflemen and machine gunners of the 38th Infantry held their ground, earning the sobriquet "Rock of the Marne."

The 3rd Infantry Division is still known by that moniker, and its Soldiers are proud of the heritage that inspired it.

By the end of that July 15th day, the 3rd Division had stopped the German attack.

Web Site Notice: This page contains information directly presented from an external source. The terms and conditions of this page may not be the same as those of this website. Click here to read the full disclaimer notice for external web sites. Thank you.