In August 24th's WW1 Centennial News Podcast, Episode 86, WW1 Tech and Speaking WW1 shared a common theme: Observation Balloons, a crucial but overlooked piece of technology. The following is a transcript from the Podcast: 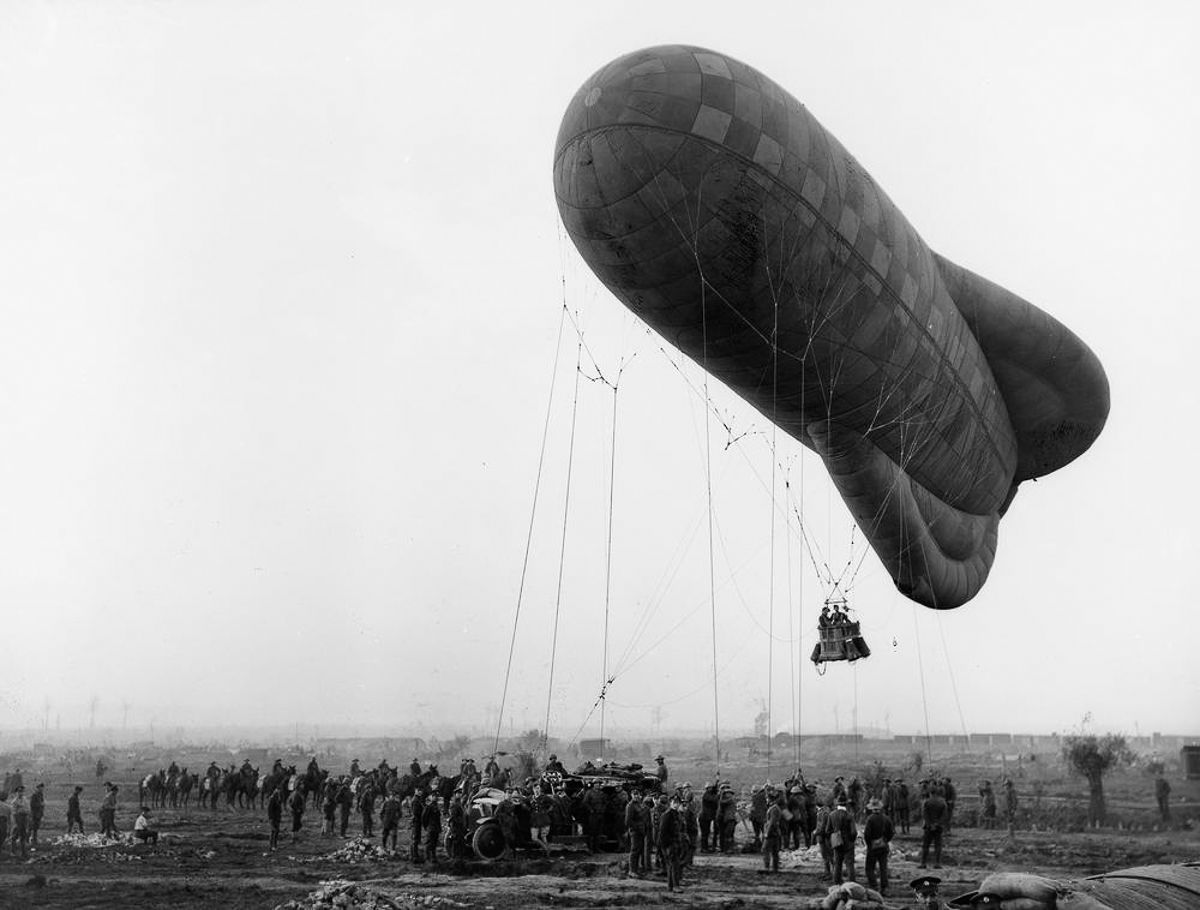 An artillery-spotting balloon goes into the sky above Ypres For this week's World War I War Tech, we're going to focus on an aerial technology that played an important role in the skies over the trenches: aerial observation balloons. Now, observation was an incredibly important role for aerial warfare in World War I. And one of the big roles for the iconic fighter planes and the dog fights in the air was in part to protect low flying, slow flying observation planes, as they took strategically critical reconnaissances photographs. However, low and slow observation planes weren't the only easy targets in the sky. 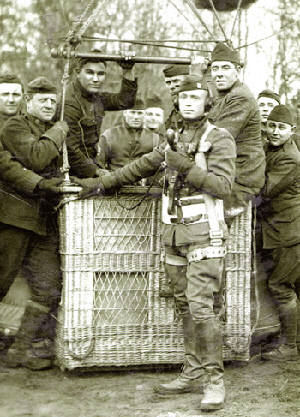 Balloons were frequently used as observation platforms, right at the fighting front. These hovering mammoths were used for directing artillery, which required spotters and observation well beyond the visual range of ground based observers. As much as planes were able to record enemy positions and movement on film, having real time spotters and observational balloon baskets linked to the ground by telephone was essential. It allowed the artillery to take advantage of increasingly large guns with vastly longer ranges.

Now, these balloons don't quite look like the hot air balloons you may imagine. They were often called sausages or saucisson in French. They were big oblong things with fat fins on the sides to keep them pointing in the direction.

As if being a sitting duck, floating unprotected over the battlefield wasn't dangerous enough, the sausage-shaped gas bags were filled with highly flammable hydrogen, making them susceptible to fire started by hot rounds coming from the ground below. They were favorite targets of planes that attacked from behind the clouds overhead. And as these "balloon busters" went after them [the Balloons], flying low at balloon level, they often got shot down with anti-aircraft guns- but not nearly as often as the balloons did.

James Allen Higgs Jr., a native of Raleigh, North Carolina, describes his balloon getting shot down, which happened to him four times during the war. "We were wearing parachute harnesses with a rope attached to the shoot that was stuffed into a bag, hanging on the outside of the basket. Our weight would pull the shoots out of the bag. They were supposed to open when we dropped 300 feet. It takes nearly five seconds to fall 300 feet from a standing start. And that's an awful long time to wonder whether you're going to live or you're going to die. The parachute opened with a considerable jolt, but it was a really pleasant feeling." 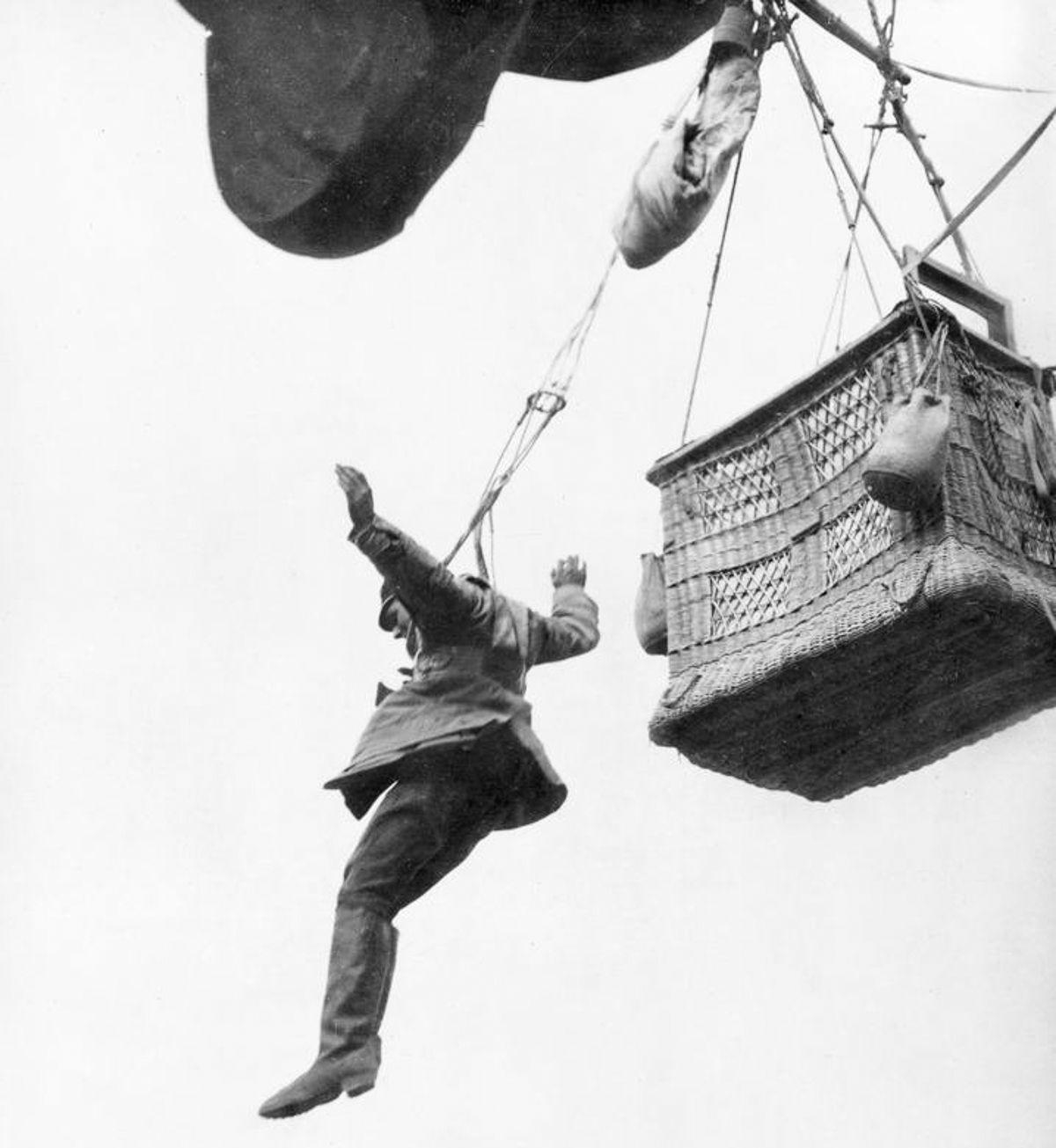 A "balloonatic" bails out of his ship

Higgs and his fellows got rewarded for jumping out of burning, falling balloons. Each time they were shot down, they got 48 hours of leave in Paris to settle their nerves and get ready to go up again. Balloons, an essential part of the aerial repertoire in World War I. You can hear a longer segment on James Allen Higgs Jr., that we recorded for War in the Sky segment of episode 30 of July 2017. The links are in the podcast notes.

For our weekly feature, Speaking World War I, we found a World War I term connected to balloons. If you're in 1918, what do you call the brave whack-a-doodle daredevils like James Allen Higgs who got up in those observation balloons on the battlefront?

You call them balloonatics, of course. They were lunatics to get into those balloon baskets as sitting ducks and easy prey for planes, sharp shooters, and artillery. The word was a common way to refer to members of balloon units in the First Army. There were 102 American balloon units that were formed during World War I. But most of them were still in the US at the time of the Armistice. Only 36 balloon units saw service overseas. Balloonatics, incredibly brave and maybe slightly crazy American men, who hung exposed over the battlefields in baskets, dangling from balloons. And this week speaking World War I word. Learn more from the links of the podcast notes.