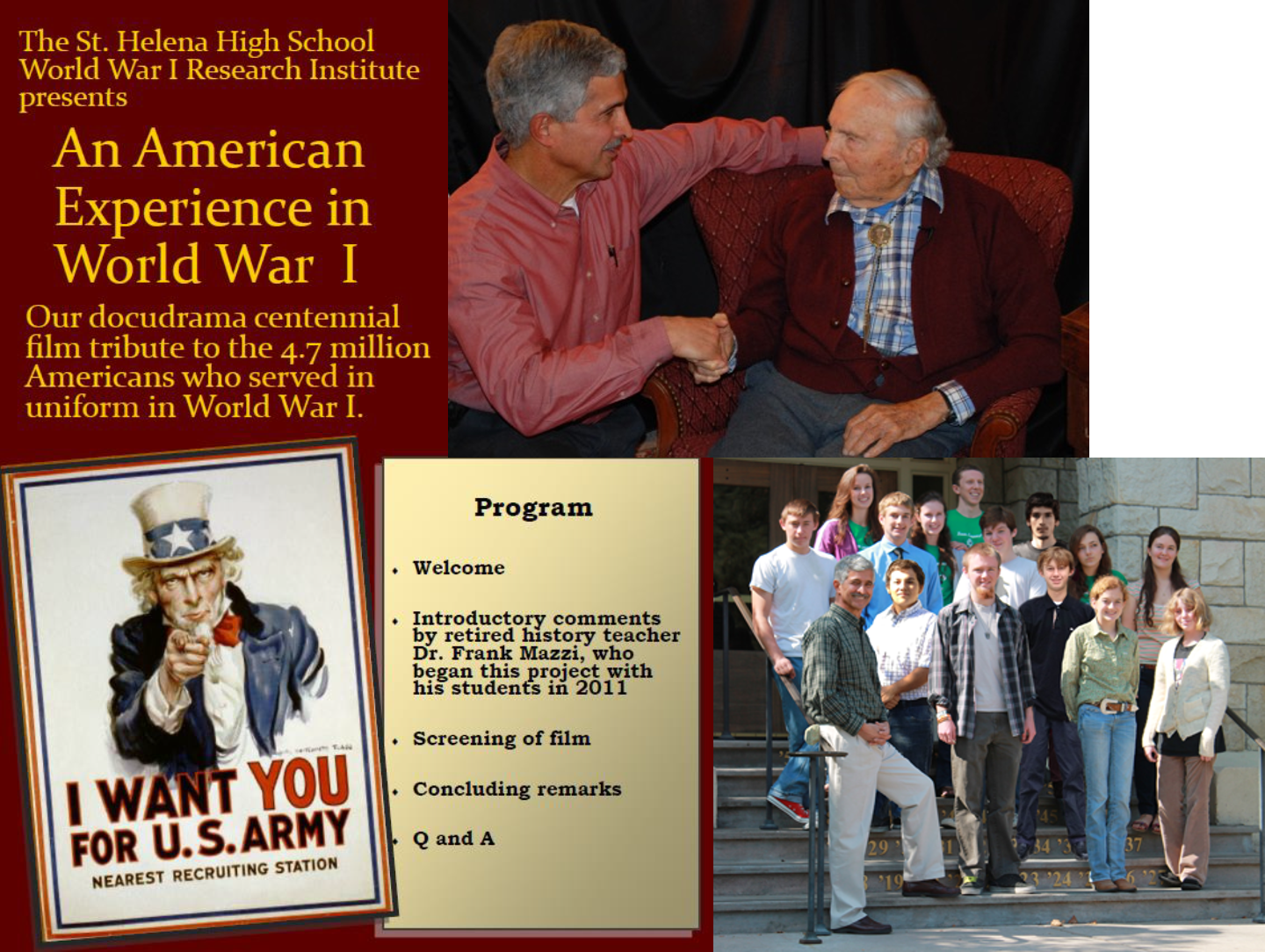 In the fall of 2008, I began a history elective class on World War I. The class title was The St. Helena High School World War I Research Institute. I taught the class until my retirement in June 2014, though I continued to meet with students for two more years as we completed a six-year film project on the American experience in the war.

The original goal of the class was to research topics on the American experience in the war and compile never-before-published information on the experiences of American men and women who had served in the war. We uploaded to our class website our summaries of those topics and our biographical treatments of men and women whose WWI experiences had never before been published.

Among our other projects was conducting a filmed interview (in November 2008) of Mr. Frank Buckles, the last surviving United States veteran of the war. That interview is viewable online at the Library of Congress Veterans History Project. We also created a WWI Museum in a dedicated area of the high school’s library, and we set out to produce a film on the American experience in the war.

In the 2010-2011 school year we began a documentary film project. Our original intent was to produce a ½-hour treatment on how the U. S. got involved in the war. We realized soon, however, that, based on the information students had researched and based on never-before-published first-hand accounts of the war, we could produce a more comprehensive treatment on the American war experience, and we could be more creative by presenting the treatment as a docudrama.

Though I retired from teaching in June 2014, my students and I continued to meet for two more years in order to complete the film.

Contributors to the Film Project

More than 1,100 images were used in the film. Those images and film footage were provided with permission from 133 U. S. and foreign institutions and individuals. 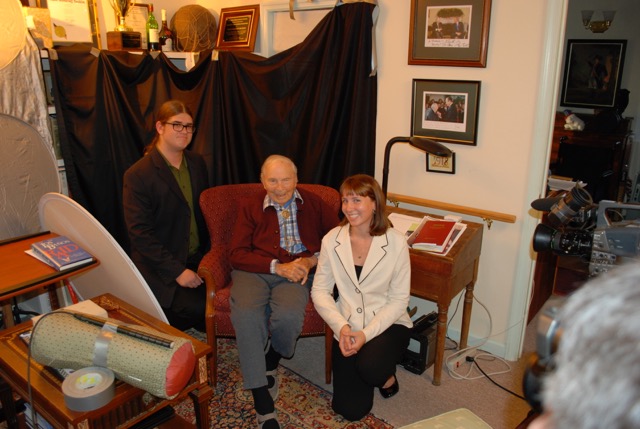 Student interviewers Webster Rasmussen and Sarah McMaster with Frank BucklesIn addition to the sixty students who, over the years, were enrolled in the class and contributed to the film project, ten other St. Helena High School students participated in the film’s production, for example, as actors, researchers, and film editors. The twenty-member St. Helena High School orchestral band performed period music for the film score, and original music score was composed and performed by students in the class. A dozen staff members have voice-over parts in the film.

The Doughboy in our story is a composite figure. His experience in the war is based on never-before-published first-hand accounts (letters, diaries, journals, reminiscences) that students read as they compiled biographies for publication on our class website (http://ww1institute.org).

The film’s story structure is a frame narrative. The Prologue and Epilogue address the theme and frame the narrative, which is a chronological account told in three parts, as follows: (1) Prologue, (2) The War before the U. S. Entered It, (3) The U. S. at War, and Armistice, (4) Aftereffects, and (5) Epilogue.

“An American Experience in World War I” is our centennial tribute to the 4.7 million Americans who served in uniform in WWI. The film reflects our class motto (shown in its emblem), “Honor the Past; Deserve the Present.” I am hopeful that the film can be shown to a wide audience of Americans who, I believe, would be inspired and heartened by what young Americans are able to accomplish. 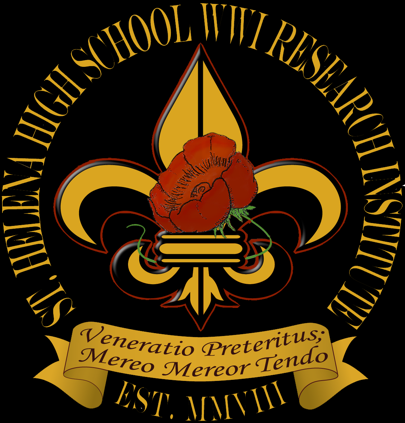 Class Emblem, St. Helena High SchoolFor the general public, the film explains why the United States got into the war and, based on first-hand accounts, what it was like to be in it. The film also addresses some of the long-range aftereffects of the war.

For college students planning to become teachers, the film is an example of how to engage students in a long-range teacher-student collaborative project that promotes learning among students of diverse talents and abilities. This film is but an example of project-based learning, this one resulting from original research, primary sources, and participation by various elements of the school community.

The voice-over narrative about events and individuals is based on student research, which was uploaded to the St. Helena High School World War I Research Institute website.

The Doughboy in our story is a composite figure. The voice-over narrative covering his experience, from his enlistment until his return to the U. S., is drawn heavily from never-before-published first-hand accounts (diaries, journals, letters, reminiscences). WWI Research Institute students selected passages from those accounts for inclusion in the script. The written script includes notes citing all sources.

I am fortunate to have had the commitment of so many talented and enthusiastic students who were not only willing to add another class to their academic schedule, but who understood and embraced the significance of the projects we undertook. As a corporate body they worked hard and passionately in order to give a voice to those Americans who served in a war that took place a century ago. They wanted to honor their memory. Who would not feel blessed and inspired as a result of having had the company of young Americans with that character and heart? 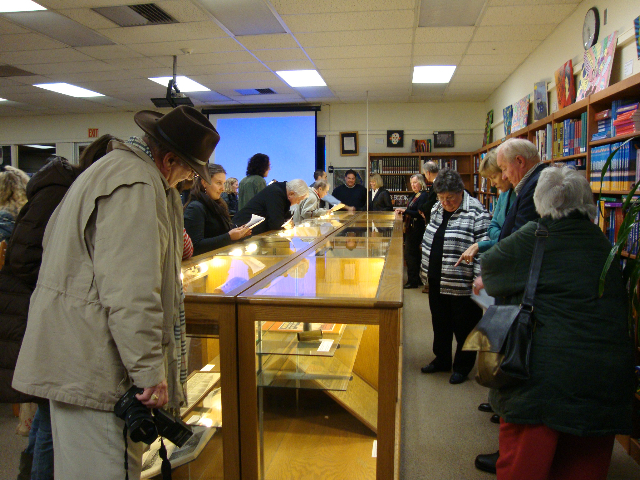 Grand Opening of the World War I Museum at St. Helena High School.