Imagine yourself standing on a street corner in the South Side of present day Chicago. There doesn’t seem to be anything extraordinary about this spot—there are buildings, cars driving by. Then suddenly, your surroundings change. You’re in the middle of the 1919 “Red Summer” when post-World War I social and racial tensions boiled over into violence. You’re witnessing a confrontation outside of an old lunch room and cigar shop.

You’re looking at an old photo of a black WWI veteran and a white militiaman. You’re looking at the Chicago Race Riot of 1919, by the end of which 38 would be dead, more than 500 injured and 1,000 black families left homeless. 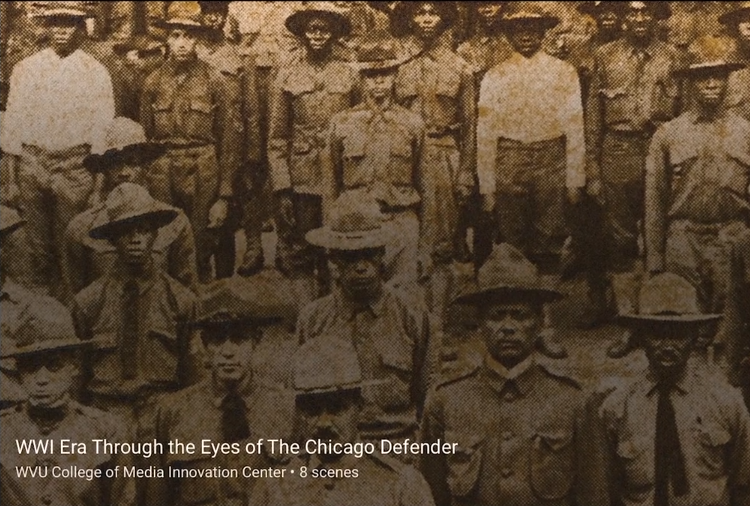 Forgotten stories like these are being made available to students nationwide through immersive storytelling technology thanks to a collaborative partnership with Google Expeditions, the Friends of the Victory Memorial and the West Virginia University Reed College of Media Innovation Center.

This project, “WWI Through the Eyes of the Chicago Defender,” brings history to life through virtual reality. The VR project takes viewers on a tour of WWI-era United States as seen through the eyes of the nation’s most influential black weekly newspaper at that time.

The project has been commissioned for Google Expeditions, a product that allows teachers to take their classes on virtual field trips, immersing students in experiences that bring abstract concepts to life, brings virtual objects into the classroom, and gives students a deeper understanding of the world beyond the classroom. The “WWI Through the Eyes of the Chicago Defender” expedition became a “pioneer” beta partner in 2016.

On the Through the Eyes of the Defender expedition, students will follow stories encompassing broad themes from that era including Jim Crow laws, the Great Migration, women’s struggle for civil rights, the second rise of the KKK and the individual story of the 370th Infantry Regiment, formerly the "Old 8th" Illinois National Guard unit, the only entirely black combat unit during World War I commanded by black officers.

“For this project, we’re used new technology that really wasn’t intended for what we are doing,” explained Joel Beeson, an associate professor at the WVU Reed College of Media and expedition producer. “This technology was designed for gaming and entertainment, and we’re adapting it to engage communities that have been historically marginalized from authorship of stories.

”By inserting a smartphone into a Google Cardboard headset and wearing it over their eyes, students will “travel” to the modern-day locations of important events from the past reported by the Chicago Defender. Historical artifacts like photos, newspaper articles and video footage will pop up on the screen.

While the technology itself is ground-breaking, Beeson says that what’s really innovative is how it’s used to give new audiences a better understanding of and appreciation for their historical past.

“Innovation comes out of problem-solving and being open to how you can tell stories to create new knowledge,” said Beeson. “For example, it might be easiest to document a story by writing it, but with VR and Augmented Reality, we can engage more people with the story by letting them experience it [almost] first-hand.”

A unique aspect of the expedition related to Engaged Journalism practice is that the project is a community-sourced, cultural memory project - anchored in the perspective of community members of Bronzeville, IL, co-produced and narrated by local voices, using local archival content, and the cultural and historical knowledge of the Black press.

Central to the project is the involvement of Chicago Friends of the Victory Memorial, led by Beverly Reed-Scott and Colonel Eugene Scott (USA Ret.), a Vietnam War veteran. Beverly was a former reporter and columnist for the Defender while her husband, Eugene, was the last publisher of the daily newspaper. They both helped fact-check, write and edit the project, and their voices narrate the experience.

A section of the project covers the role of Pullman Porters in the Great Migration, serving as Defender correspondents, and selling subscriptions and delivering the paper throughout the South – often a dangerous job. “The Defender was upsetting the status quo,” says Col. Scott, “telling blacks to leave the South, to leave these plantations and go north. White Southerners considered it a radical newspaper.”

Beverly Reed-Scott hopes that the appeal of virtual reality technology will attract young people to the important lessons of history. “To have your humanness questioned and maintain your dignity in the face of it, and not only do well, but excel. This is what the men of the 370th did every day that they served in the Great War. They had to fight and die in defense of this country and then come home and fight in defense of the right to be in this country.”

“WWI Through the Eyes of the Chicago Defender” launched this fall, with several community engagement. The project coincided with this year's WWI Centennial Commemoration that culminates on Veteran's Day, November 11, which was originally named "Armistice Day" for the day WWI ended in Europe in 1918.

Teachers are able to download the Google Expeditions app for Android or iOS and lead the class using a tablet, while students view it with a smartphone and headphones with Google Cardboard or any virtual reality headset.