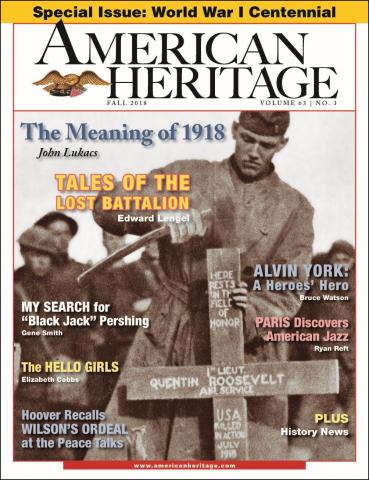 To mark the Armistice Centennial, our commemorative partners, American Heritage magazine, have a new special issue that is all about World War I.

There’s some important writing here, including an essay that Herbert Hoover wrote in 1958 about his experiences as an aide to Wilson at the peace talks after World War I. This important first-person narrative candidly details the difficulties that Wilson faced in what Hoover called “the greatest drama of intellectual leadership in all history.”

Here are some of the other essays:

The Meaning of 1918, by John Lukacs. A century after the guns fell silent along the Western Front, the work they did there remains of incalculable importance to the age we inhabit and the people we are

Agony of the Lost Battalion, by Edward G. Lengel In October 1918, 600 men of the 77th Division attacked a heavily defended German position, charging forward until they were completely surrounded by enemy forces. Only 194 men walked out when they were finally rescued.

Belgians Deported to Slave Factories, by Jeffrey B. Miller American volunteers distributing food to starving civilians in Belgium witnessed the dramatic deportations, when an estimated 120,000 men were taken to factories in Germany.

In Search of “Black Jack” Pershing, by Gene Smith. A noted historian recalls how he came to learn about the five-star general who led American forces to victory in World War I, and the sacrifices made by his family.

Jazz Delights the World, by Ryan Reft. During the World War I, American jazz bands played at hospitals, rest camps and other venues, delighting doughboys and Europeans alike.

What Germans Said About the Americans, by Edwin S. Grosvenor After the War, Army Intelligence officers collected statements from German soldiers and citizens.