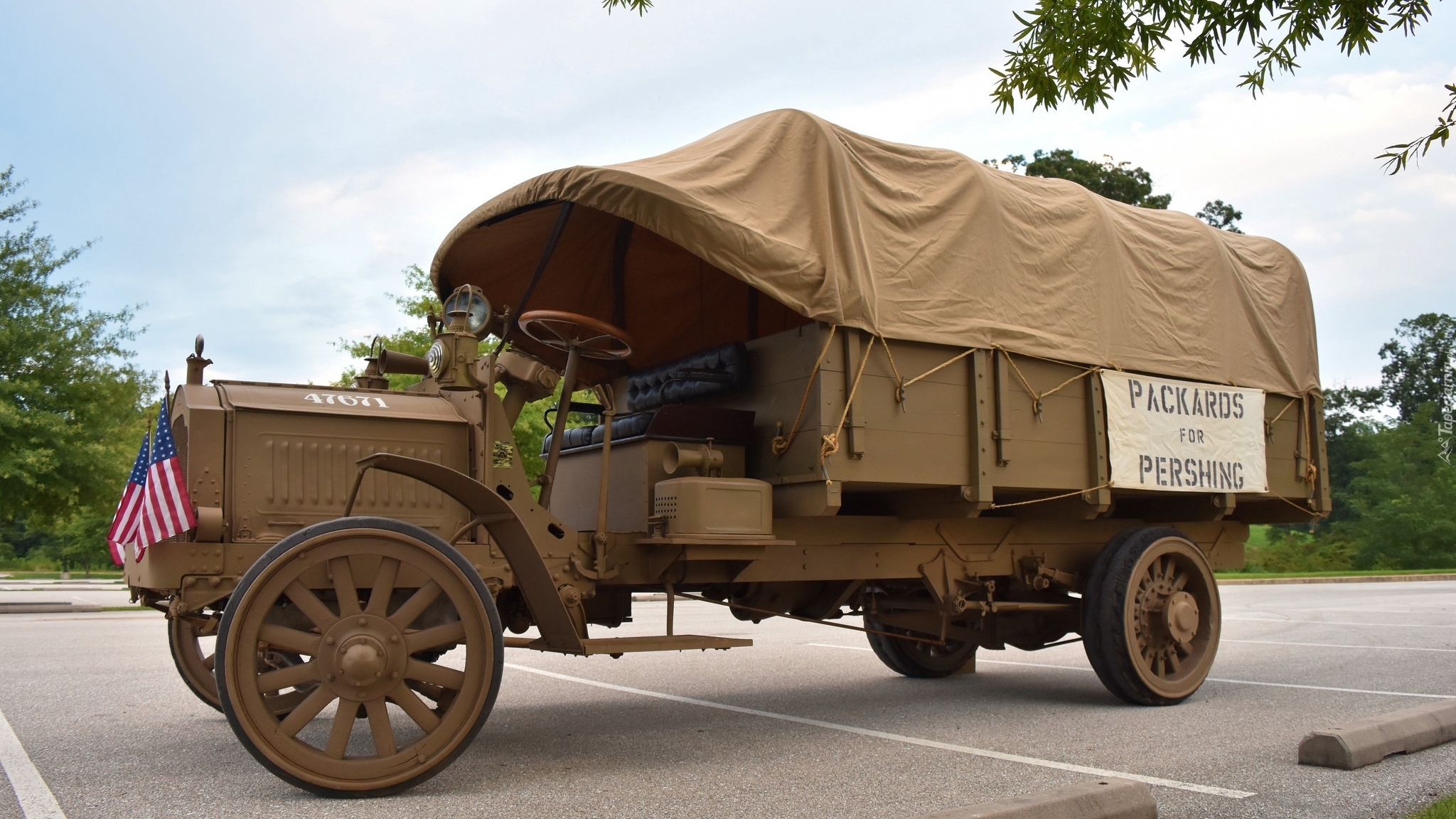 Dave Lockard's 1918 US Army truck with a body that faithfully replicates the War Department requirements of April 1917 as built by the J. G. Brill Co. of Philadelphia.

"Packard Dave" Lockard is an old, old friend to the U.S. World War I Centennial Commission (WW1CC). Dave is an antique automobile/truck enthusiast. He owns several World War I-era Packard military vehicles, and serves as a historical expert on the topic of WWI military transportation. As a volunteer educator and history presenter, "Packard Dave' has been involved with telling the story of World War I to huge groups of people at auto-shows, parades, historical events, and special commemorations. Dave's great efforts to remember our American veterans, in his special way, has recently drawn the attention of the Antique Automobile Club of America (AACA). They have bestowed Packard Dave with not one, but two, of their very highest national awards. We at the WW1CC were thrilled to hear this news, and had a chance to speak to him about it.

First -- Tell us about your two beautiful World War I trucks.

I have three running Packard trucks. These include: 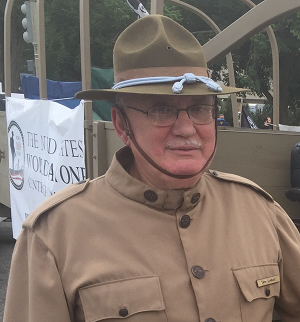 Dave Lockard1) 1918 US Army truck with a body that faithfully replicates the War Department requirements of April 1917 as built by the J. G. Brill Co. of Philadelphia. The truck rides on solid rubber tires mounted on wooden spoke wheels. The US Army owned 10,000 Packard trucks that were used in many applications, initially in 1909 as the Army's first gun mounted truck. My Packard has top speed of 17 miles per hour, is worm drive powered, has kerosene headlights and mechanical brakes (instead of hydraulics - a series of rods and levers that relied completely on massive pressure from the driver's foot to stop the truck!). From the idea to even begin to restore a Packard Army truck in 1996 and the completion of the Packard's restoration in 2010 took a lot of focused diligence and massive help from friends..

2) 1919 Packard 2 1/2 ton truck. Although this Packard rides on pneumatic or air filled tires, the tires are mounted on wooden wheels also - which limited top speed to 16 miles per hour. This truck has been mechanically restored only as the exterior retains a 100 year old appearance. Originally built as a chemical fire truck that served in Connecticut, the truck was sold in 1955 with the chemical body removed to a family who treasured collector vehicles in 1955. In 2008 I was given the truck by Mr. Charles White, a long time Philadelphia area resident and mechanical restoration began shortly there after.

3) 1920 Packard 1 1/2 ton. I purchased this truck in 1979 from Mr. Ralph Gery of Mechanicsburg, PA. Ralph had bought the Packard that had worked in a lumber yard in Sinking Springs, PA in the 1930's as Ralph knew Packard Motor Car company was a major supplier of trucks. cars & aircraft engines in WW-I. The Packard was purchased in memory of Ralph's brother Edward Gery who was killed in action in France just days before the Armistice on November 11, 1918. .Restoring this truck was an 8 year adventure...

Now -- Tell us about your big awards from the AACA!

Here is the full scoop:

Some weeks ago I received letters from the Antique Automobile Club of America (AACA) that my 1918 Packard Army truck and 1919 Packard (nicknamed 'Rusty') were nominated for the 'AACA National Awards'.

To be perfectly honest I did not know such an award existed. I think you know that am not about 'awards' or trophies' - they do nothing for me. It is the history and the people that drives me. Here is what I learned from the AACA website: http://www.aaca.org/Publications/national-awards-2.html

AACA Judges are told to over the year during AACA Meets all across the country to select potential exceptional vehicle candidates - a list of over 200 vehicles I heard is submitted to Headquarters from the thousands of vehicles entered at AACA Meets in 2018 all across the country.. The 1918 at only two AACA meets (Gettysburg in July & Hershey) this year and the 1919 was only at Hershey, it wasn't like the trucks got a lot of exposure.

So I sent the required Packard truck pictures & information into AACA National Headquarters and a couple weeks ago received confirmation that both the 1918 & the 1919 were selected for the award! 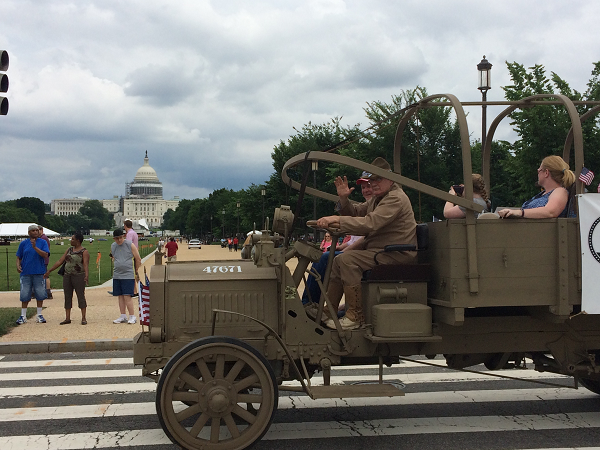 Dave Lockard in the 2016 National Memorial Day Parade in Washington DC, driving past the U.S. Capitol Building.The awards will be presented in Philadelphia during the AACA National Meeting in February. I've never attended this gathering but I understand it is an honor to have a vehicle selected for this award and quite unusual to have two vehicles selected in a year for this award.

You have been telling the WWI story at shows, parades, fairs, all over the East Coast. Tell us about your efforts, and about the crowd reactions.

A wonderful friend & seamstress by the name of Joy Monroe in Holt, Michigan custom made me a uniform that allowed to be an 'Interpreter' at the US Army Heritage & Education Center in Carlisle, PA for school groups taking the walking tour @ AHEC. I typically am at 'The Trench Exhibit' where I can explain the horrors of trench warfare. I also wear the uniform whenever I take the Army Packard to explain America's role in WW-I that made the final victory for the Allies possible.

Having a 1918 Packard road ready for the Centennial Commemoration of the end of 'The Great War' was unto itself a confluence of so much coming altogether at the right time that to this day I still continue to be amazed. The highest honor in my life has been to have the 1918 Packard in the United States National Memorial Day Parade in Washington, DC.

2018 marked the 5th consecutive year the 1918 Packard Army truck has appeared in the National Memorial Day Parade to honor those who gave their last ounce of courage for their country, I hold this event to truly be the pinnacle of achievement for me as a hobbyist, student of history and patriotic American.

Why is this effort important to you?

I believe the story of America must continually told. I am a Navy veteran (1966-1970) and feel it is my patriotic duty to do so from my experiences alone.

Growing up in the 1950's I learned my next door neighbor in Glenside, PA was volunteer ambulance driver in France in 1916 for the American Ambulance Field Service (AAFS) driving Model T ambulances back from 'The Front' with wounded French soldiers.

In the 1960's I worked at a very large Glenside, PA restaurant 'Casa Conti' that could seat over 1,500 patrons at one time! The founder was Joseph Conti had been a US Army cook behind a horse drawn chow wagon in war torn France. Joseph, an Italian immigrant from northern Italy (Parma) received his citizenship by serving in the US Army. Following the war, Joseph Conti was kept as part of the Occupation Force and was ordered to prepare & serve a meal to President Woodrow Wilson when the President attended 'The Peace Conference' in 1919 in France.

I had the honor to talk on several occasions to Joseph Conti about his war experiences as he labored in the kitchen of his restaurant 'Casa Conti well into his '80's making delicious pies and rice pudding. I also learned that John Phillip Sousa stayed at Casa Conti hotel in the 1920's when he and his band played at nearby Willow Grove Park.

Owning a 1920 Packard truck that was purchased in memory of a soldier who died in the 'Great War' is indeed humbling to me. 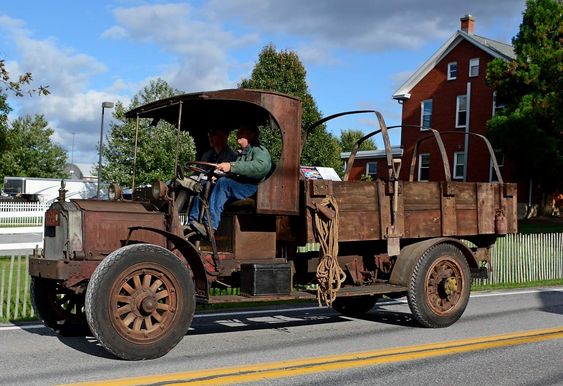 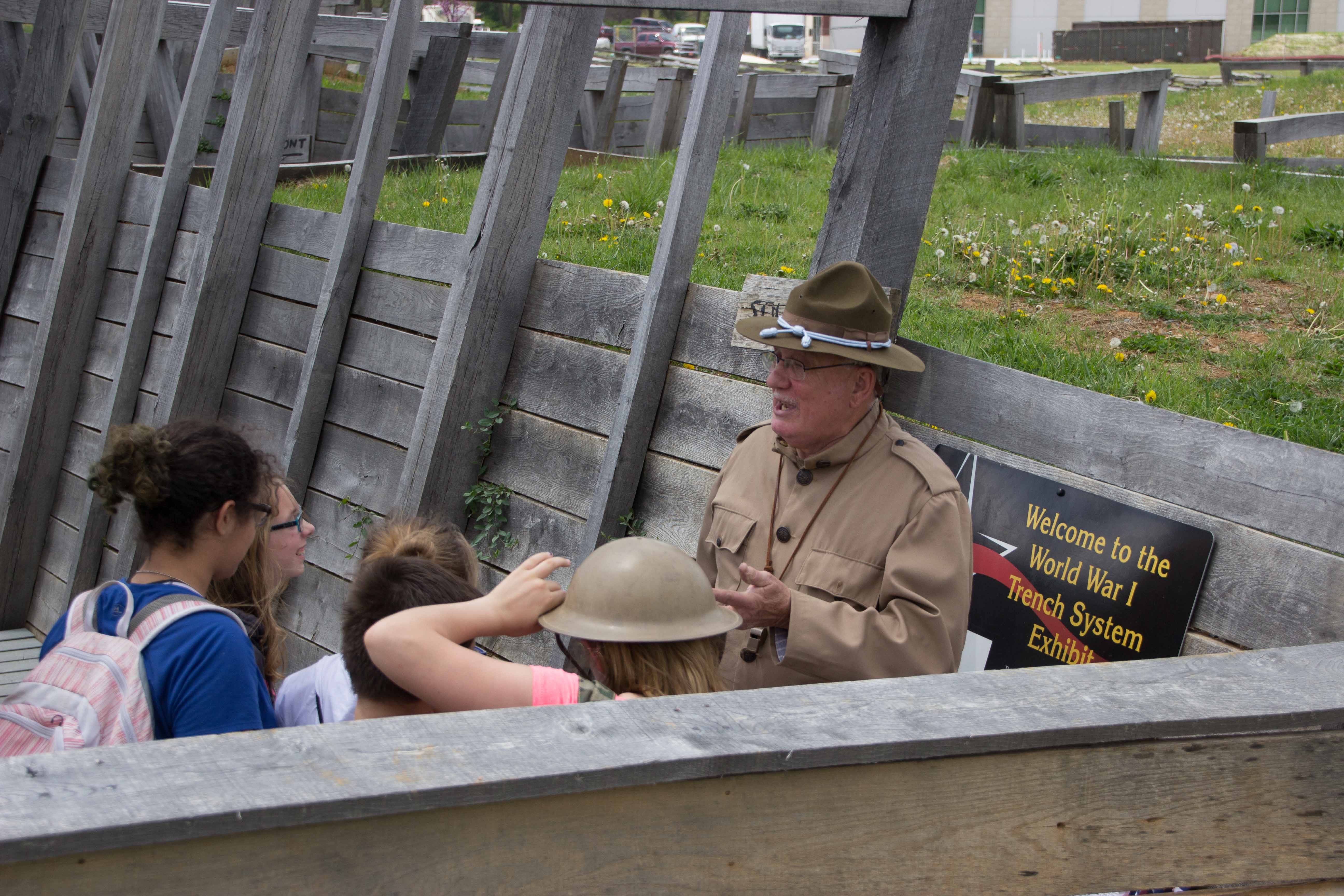 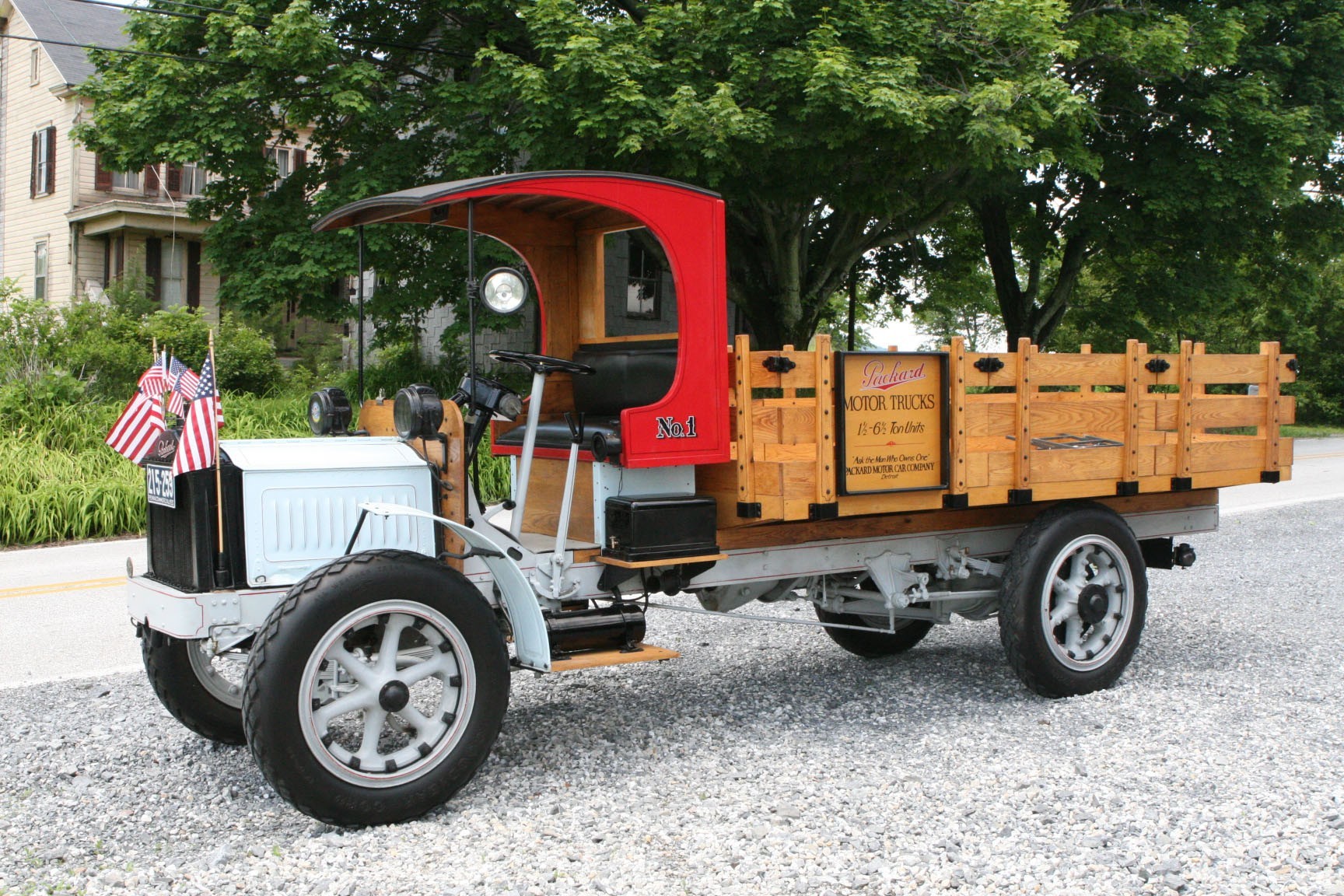