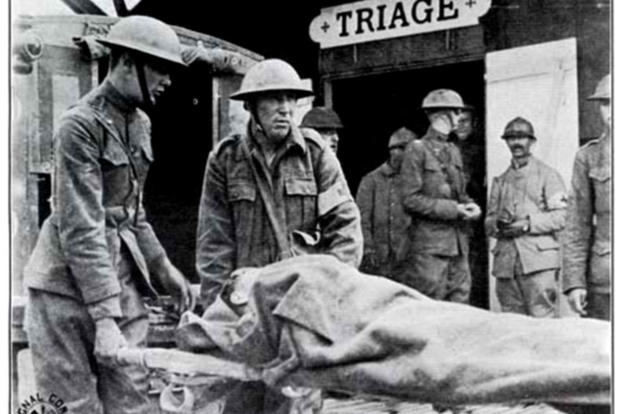 July 17, 1918: A wounded soldier is carried to the 42nd Infantry "Rainbow" Division's triage station near Suippes, France during the Second Battle of the Marne. Army 2nd Lt. Donald A. McClure fought in that battle, but would not be wounded until the war's final day -- November 11, 1918. (US Army photo)

PHILADELPHIA (CBS) — The family of a man injured in World War I gets a welcome surprise.

In a letter home to Pennsylvania, 2nd Lt. Donald A. McClure described the severe leg injury he had suffered. The letter came from France. The year was 1918. McClure was 22.

“What must have been going through his mind, the fear and just what’s going to happen to me,” said McClure’s grandson, Marc, reading the letter for the first time.

He knew of his grandfather’s experience in WWI but didn’t know that there was a piece missing.

“People often ask is there a market for military metals? We like to refer to it as circumstance of life,” said Jessica Jaggars, with Purple Hearts Reunited.

Three weeks ago, the nonprofit Purple Hearts Reunited reached out to this West Chester family, letting them know that they found something that belonged to them.

The organization seeks out and buys them from sellers on eBay as part of a nationwide mission to return misplaced medals of valor.

“I had a lot of questions and I was like wow this is really cool,” said Marc.