(U.S. Senate) – U.S. Senators Jon Tester (D-Mont.) and Marsha Blackburn (R-Tenn.) are honoring the groundbreaking service of the women who connected American and French forces on the front lines of World War I. 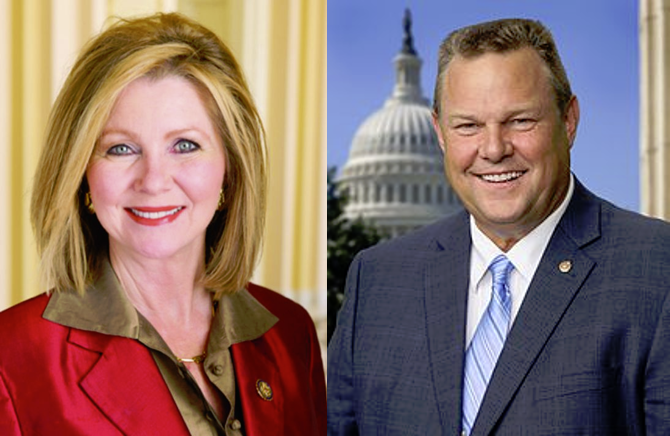 “The Hello Girls were faster and more accurate than any enlisted man at connecting troops on the battlefield with military leaders,” said Tester, Ranking Member of the Senate Veterans’ Affairs Committee. “Their bravery and composure helped our allied forces win the war, but they were still denied the veteran status and benefits they deserve. They blazed a new path for women on the front lines in France, and the Congressional Gold Medal will honor their service as well as their fight for recognition.”

“This bill gives us the opportunity to honor the Hello Girls in our history books,” said Blackburn. “These women played a key role in the communications efforts that enabled the American and French forces to enter into battle with the intelligence needed to succeed. The Hello Girls Congressional Gold Medal Act ensures that their critical role in World War I will not go unnoticed by those who study American history in the years to come.”

The Hello Girls were recruited after male infantrymen struggled to connect calls quickly or communicate with their French counterparts. The bilingual Hello Girls were deployed to France to serve at military headquarters and command outposts in the field alongside the American Expeditionary Forces. Despite their outstanding service and the military oath they took, they were denied veteran status and benefits when they returned home.

Merle Egan Anderson of Montana led the effort to petition Congress more than 50 times for recognition of their service. In 1977, 60 years after the first Hello Girls took the Army oath, Congress passed legislation to retroactively acknowledge the military service of the women of the U.S. Army Signal Corps.

“I am so proud of my grandmother and all of the women,” said Carolyn Timbie, granddaughter of Grace Banker, who was the Chief Operator of the Hello Girls. “Their story was tucked away for 100 years, and to think that they might be honored with a Congressional Gold Medal for their service to our country is quite overwhelming.”

"The Hello Girls were America's first women soldiers and thus occupy an important place in our history as true pioneers,” said Dr. Elizabeth Cobbs, Ph.D., author of the Hello Girls: America’s First Women Soldiers. “At the request of General John Pershing and the U.S. War Department, they braved submarine warfare, aerial bombardment, and the Influenza Pandemic of 1918 to connect 26 million calls for the American Expeditionary Forces in France. Their efforts helped our Army win World War One. Afterwards, they fought sixty years for recognition, successfully advancing the rights of all women as full citizens of our nation." 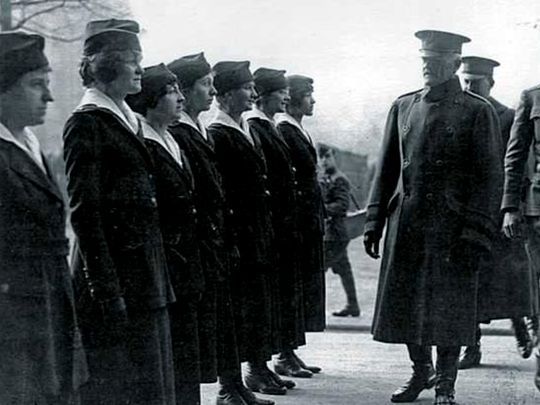 General John Pershing reviews group of "Hello Girls" in France during WWI."World War I was a cornerstone event in our nation's history,” said Terry Hamby, Chair of the U.S. World War I Centennial Commission. “Two million American men and women deployed to fight in this war, and 116,516 of them never made it home. The stories of these brave men and women are our birthright to preserve, and our responsibility, to give to America's future generations."

“The part played by women in winning the war has been an important one,” wrote General Pershing in General Orders No. 73, April 30, 1919,” said Cokie Roberts, noted author, historian, and journalist, whose mother Lindy Boggs sponsored the bill to give the Hello Girls veteran status in 1977. “Pershing regularly saw the “Hello Girls” in action and knew the key role they played in the Signal Corps. Without these women on the front lines, communication between headquarters and the field would have been all but impossible. They served nobly and bravely, often winning military honors for their efforts. And then they returned home to be told they hadn’t really performed the remarkable tasks they had accomplished. Many decades later they were finally recognized. Now, 100 years after World War I it’s time to give them their due in awarding them the Congressional Medal of Honor. It’s about time.”

“Please accept my personal thanks for your proposed recognition of the U.S. Army’s Hello Girls of World War I,” said Colonel (retired) Gerald E. York. “As the grandson of World War I veteran, SGT Alvin C. York, and as a veteran myself, it gives my family and I great pleasure to see that these American veterans are not forgotten. These women are particularly deserving of this Congressional Gold Medal, and you deserve great credit for recognizing this. Their challenges in their service were unique, and their challenges after returning home were astonishing. Yet, somehow, they pushed forward and persevered.”