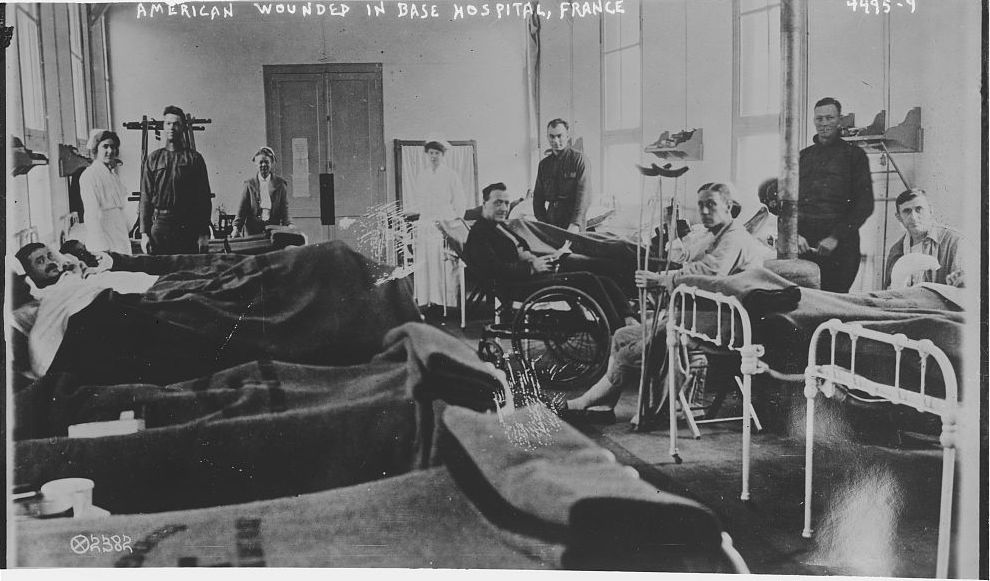 Nurses and wounded Doughboys at a base hospital in France, 1918. Library of Congress Prints and Photographs Division

The following article comes to us from our friend, historian, author, and tour guide, Ed Lengel. Ed has a special interest and expertise in World War I, and he maintains a great blog site on the topic, that can be found here: http://www.edwardlengel.com

Sarah Sand was a professional. When the United States entered World War I, she was Director of Nursing at Evangelical Hospital in Bismarck, North Dakota. Like many other nurses, she immediately volunteered for service overseas. It took a year, however, for what would become her service organization, Base Hospital #60, to be organized. After extensive training at Camp Jackson, South Carolina, Sand departed the United States in September, 1918. She arrived at the front in time to help care for the massive wave of perhaps 100,000 casualties resulting from the Meuse-Argonne offensive. Her life would never be the same again.

Caring for “Our Boys”

Because of her supervisory experience, Sarah Sand was placed in charge of a surgical ward, where she, one other nurse and two corpsmen had to care for around 100 patients at any given time. Many of them were badly mangled. Because of the sheer volume of casualties, the men passed through her ward so quickly–and some of them died there–that she barely got to know them. Still, her heart filled with compassion for the wounded doughboys who, she observed, endured their suffering with stoicism, dignity and often good cheer.

At the time of the Armistice on November 11, 1918, Sand was in charge of a pneumonia ward, supervising care for many gravely ill patients. There was little time to rejoice at war’s end–everyone was either too sick, or too busy. At Christmas, though, Sand and her fellow nurses did everything they could to bring some joy and hope to the men they had come to call “our boys.” They hung festive decorations, prepared a feast, and gave each patient a basket filled with treats like fruit and candy.

Living conditions for nurses on the Western Front were far from ideal, even after the Armistice. The winter of 1918-1919 was exceptionally frigid, and the windows in their living quarters didn’t fit their frames. The nurses had few opportunities for washing up, usually ate cold food, and rarely slept in beds. Not until February did Sarah Sand get an opportunity for leave–a welcome two week vacation that she and the other nurses used to visit Paris. When leave ended, however, it was back to work at Base Hospital #60, caring for sick soldiers and civilians, and others recuperating from wounds. 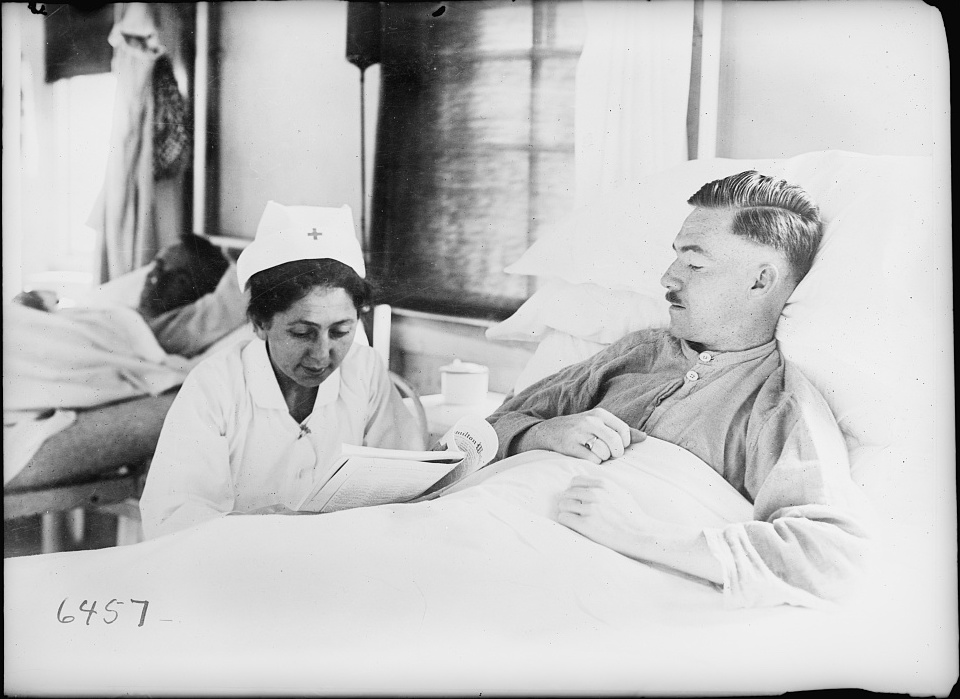 An American nurse reads to a wounded Doughboy. Library of Congress Prints and Photographs DivisionIn April the nurses learned that their return home was approaching. Doctors and administrators at the hospital threw a huge party for the nurses, complete with a large cake emblazoned with a picture of Florence Nightingale. There followed an inspection by General John J. Pershing, and weeks of cleaning up and waiting before they finally boarded a ship home on June 10. But the war had no more ended for the nurses than it had for the millions of servicemen who had seen duty at the front.

Shortly after Sarah Sand and her fellow nurses arrived in New York City, they were treated to a play called The Follies of 1919. It lightheartedly traced the experiences of a Red Cross nurse behind the front lines, and ended with her marrying and settling down to a life of happiness and tranquility. For Nurse Sand the whole thing rang hollow:

“Of course it was only a play. In true life the World War nurses could never entirely escape from the thoughts of their wounded and dying comrades who had started out so bravely to ‘Save Democracy for the Future’ and who had taken part in this ‘War to End All War.’ We had stood by their bedsides in their misery and suffering and in spite of our best efforts, we had seen the light fade from their eyes and their bodies stiffen in death.”

Typically, Sarah Sand’s thoughts were not for herself, but for “our boys.” “Thousands of soldiers were coming home wounded, with broken, handicapped bodies. Some were diseased, others injured with slow and deadly gasses that would destroy their lungs and still others with shell-shocked minds. Will these comrades ever again know real happiness? Or must they spend the remaining days of their lives on some hospital cot, suffering for their devotion to their country?” Even as she asked, she knew the answer.

More Tales of Men and Women at War

Sarah Sand chronicled her experiences in Lamp for a Soldier: The Caring Story of a Nurse in World War I. Her stories and those of other men and women are revealed in my books To Conquer Hell: The Meuse-Argonne, 1918 and Never in Finer Company. Please share your email address below. You’ll get monthly emails about research discoveries, book updates, and more. 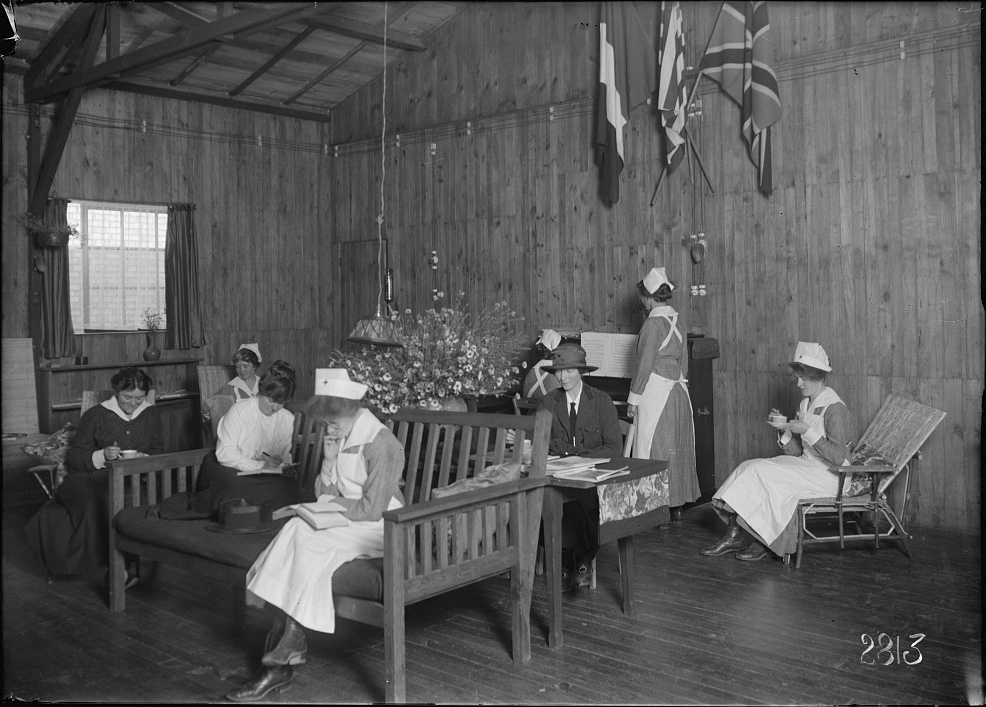 Army nurses relax in a recreation room provided by the American Red Cross. Library of Congress Prints and Photographs Division 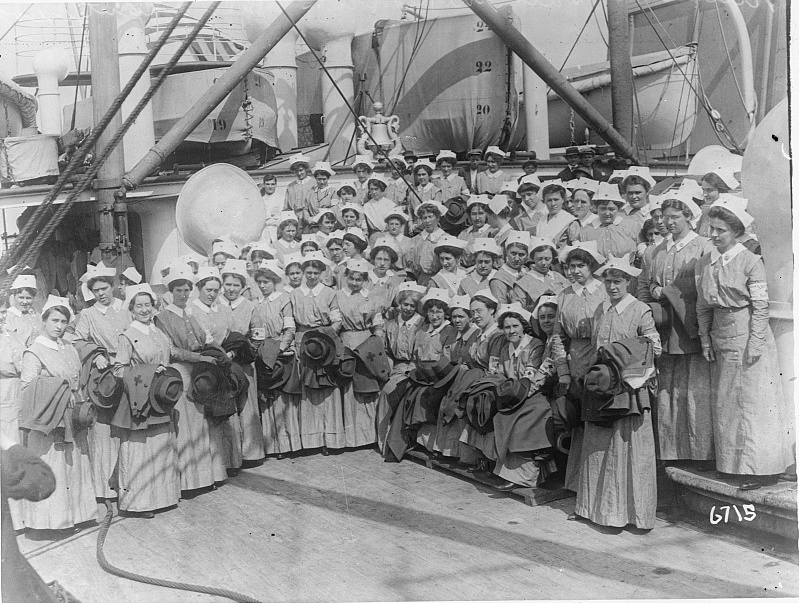 Nurses on shipboard. Library of Congress Prints and Photographs Division