Making of the Novel “Anumpa Warrior: Choctaw Code Talkers of World War I”

“Who has heard of the Navajo Code Talkers of World War II?”

Hands went up all around the room.

“What about the Choctaw Code Talkers of World War I?” 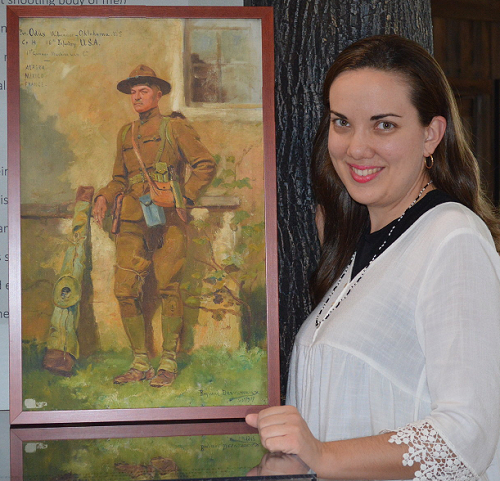 Sarah Elisabeth Sawyer with a painting of Choctaw Code Talker Otis Leader, pictured as the “ideal American Doughboy.” The rare historical painting was commissioned by the French Army Museum. Replica donated to the Choctaw Nation museum.This happened at every event where I spoke, or with friends, history buffs, or in casual waiting room conversations. A fantastic and monumental part of our American and military history was still unknown to the public. This is why I decided to write the novel Anumpa Warrior: Choctaw Code Talkers of World War I.

I can’t remember a time I didn’t know the story of the handful of Choctaws who used our language to save lives and help bring a swifter end to the First World War. I’ve written bits and pieces of their story throughout my writing journey, but couldn’t decide the point of view from which to tell the full story. When you write a novel, you get deep into the main character’s skin, deep into their thoughts, emotions, beliefs, doubts, and fears. I couldn’t do that with these real men who were known and loved by their descendants living today, so I chose to write the story from a fictional main character’s point of view. The story slowly fell into place from there. But one enormous hurdle still stood fast: research.

I began educating myself on WWI and quickly learned how little I knew about it beyond the black and white Sergeant York movie, a staple in my home when I was growing up.

Getting a stack of books from the library and gathering a few from around the house, I immersed myself in a bird’s eye view of the war. I dug up first-hand accounts — journals, letters. Then I turned to the specific history of the unit most of the Choctaws served in — the 36th Division, 142nd Infantry, Company E. Advanced researchers like Dr. William Meadows of Missouri State University and Code Talker scholar along with Judy Allen, Historic Projects Officer for the Choctaw Nation of Oklahoma, directed me to books and reports written by officers in the division and the chaplain of the 142nd. They also shared other resources like newspaper accounts about the Choctaw Code Talkers.

The time came for me to expand my research into the world and into the trenches — literally.

At the National Archives in College Park, Maryland, I discovered a medical report in the archives with an actual message the Choctaws transmitted, and also a handwritten report by Captain Elijah W. Horner, commander of Company E. He details the horrendous battle at St. Etienne October 8-12, 1918 — the 36th Division’s first of two major engagements.

At NARA online, I discovered a report written by Choctaw Code Talker Corporal James Edwards where he describes shells landing all around him while he was acting as a runner, and how he felt no fear.

Then it was on to France, a research trip I’d only dreamed of. My traveling companion was Tiajuana Cochnauer, also a tribal member, who presented the Choctaw Code Talkers story at the National Association for Interpretation’s international conference in Reims. From there, we rented a car and hit the roads in the French countryside. Thanks to our wonderful guide, Roger Cook, we visited the places where Choctaws fought — and some died. 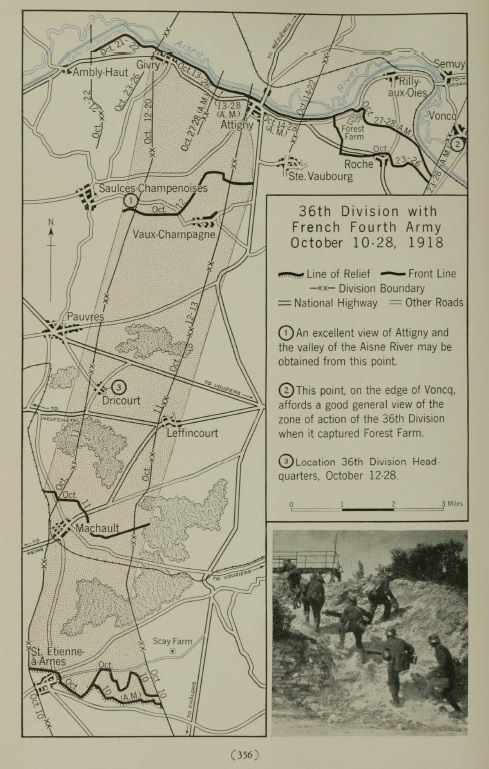 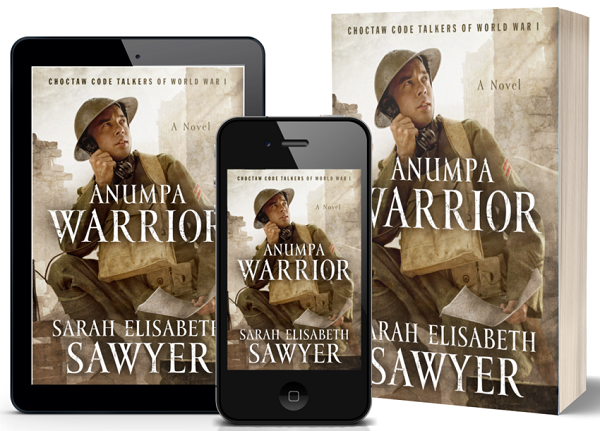 Roaming through shell craters, real and replica trenches, concrete German bunkers, lost villages, American cemeteries and monuments, centuries old cathedrals, and museums throughout northeastern France gave me a sense of how real the war still is to the French people, and how real it is to the Americans who care for the resting places of the boys who never came back from over there. I read as many names as I could on the marble white crosses and chapel walls in the WWI cemeteries, wanting to embed their memories in my own and prayed a prayer of gratitude for their sacrifice and the impact they had on the world — and on the freedoms and life I have today.

Standing on a hilltop in Voncq, we stared over the former battlefield of Forest Ferme — the location where Choctaw doughboys used their language to transmit critical messages that resulted in a swift and highly unusual battle of few casualties on October 27, 1918.

The reclaimed farmland shone green and bright under the spring sunshine in April 2018. Centuries of American, French, and Choctaw history culminated there. Those resilient warriors were a part of a shared history of Choctaws fighting side by side with the French and Americans for over one hundred years.

Sgt. Otis Leader in the 1st Division — the only Choctaw Code Talker not in the 36th — is another critical piece of largely unknown WWI history. In 1917, he was selected by French government commissioned-artist Raymond Desvarreux to represent the “ideal American Doughboy.” Later in combat, he was wounded twice and gassed three times. General Pershing called Otis Leader one of the war’s “greatest fighting machines.”

Tiajuana and I had the privilege of viewing the original painting by Raymond Desvarreux of Otis Leader at the Musée de l'Armée - Hôtel national des Invalides. We brought home a digital copy of the painting and, with permission from the museum, had a canvas replica made and presented it to our tribe. It hangs in the Choctaw Nation Museum at Tuskahoma, Oklahoma.

When asked why he enlisted, Choctaw/Chickasaw/Scotch/Irish Sgt. Otis Leader said it was to prove he was 100% American.

Who were the rest of these Choctaw men? I interviewed their descendants by phone and in their homes in Oklahoma, Arkansas, and Texas to get a taste of their personalities, humor, and faith in God, and even heard a few stories of their battle experiences. I learned how they rarely talked about the war, yet I wonder what conversations they had among themselves in Choctaw while sitting on front porches on their allotment lands in Oklahoma.

Thankfully, we have elders still living today for whom Chahta anumpa, the Choctaw language, is their first language and are passing it on.

World War I gives us an opportunity to reflect on changing times in the world. It was a critical turning point for America and all the cultures it holds in its heart. Among those cultures is the Choctaw Nation. Though Choctaws were punished for speaking their language in boarding school, they kept it on their tongues and used it to make history in the First World War.

Sarah Elisabeth Sawyer is an award-winning inspirational author, speaker and Choctaw storyteller of traditional and fictional tales based on the lives of her people. The Smithsonian’s National Museum of the American Indian has honored her as a literary artist through their Artist Leadership Program for her work in preserving Trail of Tears stories. In 2015, First Peoples Fund awarded her an Artist in Business Leadership Fellowship. She writes from her hometown in Texas, partnering with her mother, Lynda Kay Sawyer, in continued research for future novels. Learn more about their work to preserve Choctaw history and culture at www.NativeCodeTalkers.com and Facebook.com/SarahElisabethSawyer 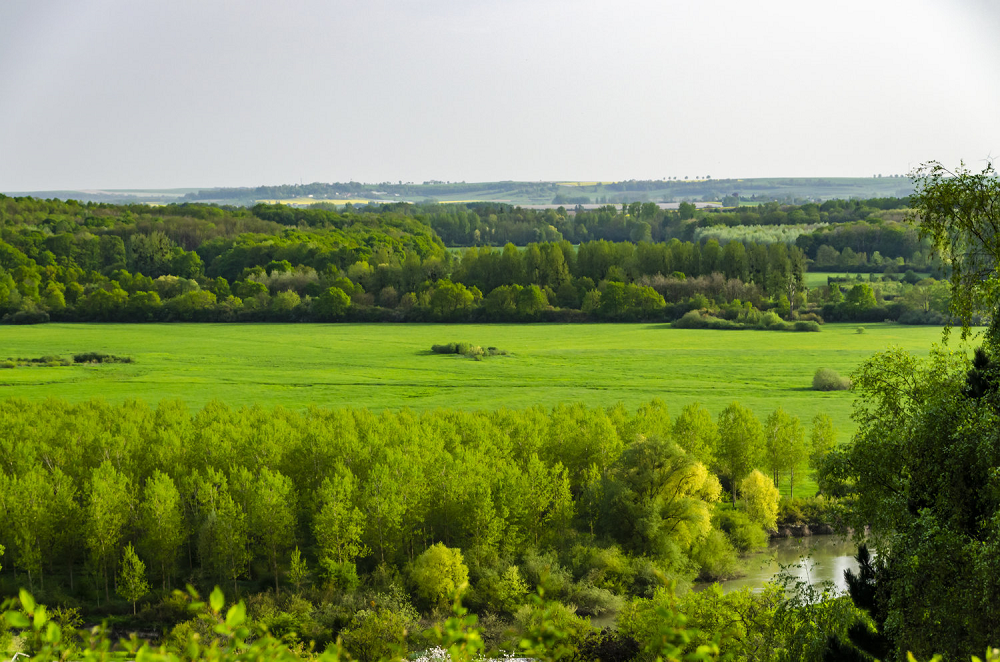