As most of us know, February is Black History Month. This February has been a very busy time for telling the story of the African-American heroes of World War I -- and we at the Centennial Commission are thrilled by the exposure that the Commission-sponsored 369th Experience is getting nationally.

The first major national story that we came across related to the 369th Division was this piece on the official U.S Army website. Featuring the legendary 369th Infantry Regiment "Harlem Hellfighters, and their Regimental Jazz Band, the article appeared on February 1st -- the first day of Black History Month -- and has been seen by over 500,000 people.  https://www.army.mil/article/199913/african_american_wwi_harlem_hell_fighters_proved_their_mettle_patriotism_in_combat

Two of our favorite partners appeared on a major broadcast segment in the New York City area. 369th Experience project leader Stephany Neal, and noted historian Dr. Jeffrey Sammons, were featured on NYC's ABC 7 "Here and Now" show, with Sandra Bookman. They were featured in-studio guests, talking about the "369th Experience" tribute band, and about the original 369th Infantry Regiment. The eleven-minute interview can be found here. https://abc7ny.com/society/here-and-now-on-february-10-2019-the-369th-experience/5132788/

The Fox News Network created a remarkable broadcast piece about the saga of the original 369th Harlem Hellfighters, that also posted to a wide social media audience nationwide. https://www.foxnews.com/us/black-history-month-african-american-world-war-i-heroes-played-inspirational-role-in-fight-to-define-true-meaning-of-democracy?fbclid=IwAR0b9g8qRmONA9P7Ts8NVCRj0R9MywGvMIDNTEuaorzqw-7N9xJV6wE7lgQ 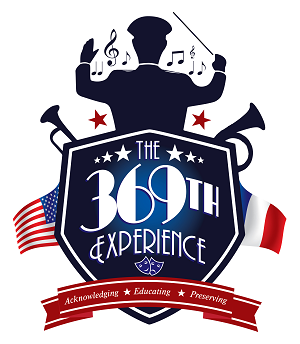 The U.S. Wold War I Centennial Commission has also been active in the media, telling these 369th stories. For our ww1cc.org/cn #Podcast Episode 110, our host Theo Mayer interviewed Jason Moran, Artistic Director for Jazz Kennedy Center for the Performing Arts, pianist, composer, educator, presents thoughts on James Reese Europe and the Harlem Hellfighters regimental band. Moran said that Reese "was a masterful conductor and supreme composer. He enlivened the world with this syncopation that he created. There's something about the feel that he set up 100 years ago that set the course of what jazz would become. He is one of our firmest roots in what the tradition of freedom of improvisation has suggested for the rest of the world."

Will these stories keep rolling after February? Yes they will! Entercom Radio's "Connecting Vets" show has recently completed interviews, and is editing/ producing an upcoming piece on the music of the original 369th jazz band, and on the efforts of the "369th Experience" to preserve that musical legacy. This piece will appear in the coming weeks on their weekly radio show, their social media, and on their website https://connectingvets.radio.com