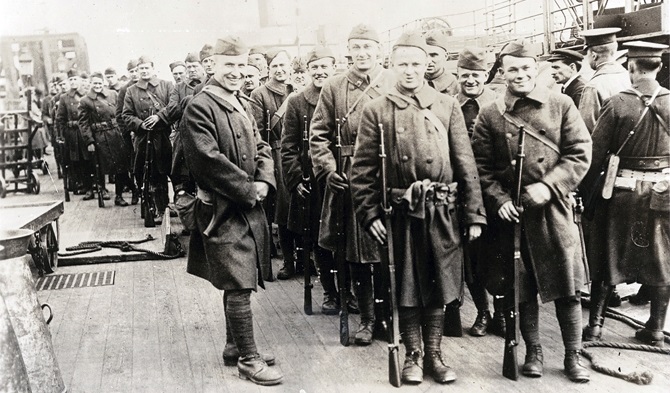 Doughboys from the U.S. Army’s 339th Infantry Regiment expected to be heading to the trenches of the Western Front in 1918. Instead they found themselves steaming for Russia.

IT WAS NOVEMBER 11, 1918 – Armistice Day. The fighting in Europe had just ended, but for a contingent of 5,000 Doughboys their war was only beginning.

Even as Germany’s surrender was being signed in a railway car at Compiegne Forest near Paris, even as throngs were celebrating in London and New York, Captain Robert Boyd and the men of the U.S. Army’s 339th Infantry Regiment, Company B, were fighting for their lives against hundreds of Bolshevik troops in the snowy, bitterly cold wastes of northern Russia.

It was a somewhat bizarre series of events that had brought this contingent of Doughboys to this remote and desolate place: the village of Toulgas on the Dvina River, 150 miles from the relative safety of the frozen port of Archangel on Russia’s northern coast.

Their mission had been devised mainly by the British during the Great War’s darkest hour the previous spring. The German offensive of March, 1918 threatened to break the Allied lines in France and roll the British all the way to the Channel ports before the United States, which had entered the war in April 1917, had enough troops ready for the Western Front. Desperate, the brass agreed to divert a small force of American soldiers to far off Russia of all places to fight in an entirely new war.

The collapse of the Czarist monarchy the same year had, by the end of 1917, resulted in the rise of a Bolshevist regime. By March, the revolutionaries hurriedly negotiated a treaty with Germany, signing the agreement in March of 1918. Secure in east, Germany rushed scores of veteran divisions from the Russian Front to France to take part in the offensive.