(Left) This is the only picture on the cannon in theater and likely the only picture that proves it was used (though it got captured!) in combat. It was captioned with a date of June 11th, 1918. (Right) The cannon in sad condition in the village of Saint Paris, Ohio before being picked up for the restoration project. (Center) Restoration project leader Jared Shank behind the cannon undergoing restoration. Shank is an Army field artillery veteran who served in in Afghanistan with the 3rd battalion 319th Airborne Field Artillery Regiment of the 82nd Airborne Division.

"I feel a direct personal connection to our Doughboys"

Over the years, we have met several members of our WWI community who have gotten personally involved in hands-on projects, projects that help them to really embrace our WWI history. They include trench work restorations, tabletop diorama creations, reenactor impersonations, restorations of trains/tanks/ trucks/artillery pieces/ambulances/warships, etc. We love these projects -- and we always find interesting stories behind those people who undertake them. Our latest such project is being done by our friend Jared Shank, of Ohio. Jared is an Army veteran, and he only just started working on an incredible find -- a WWI-era light artillery piece, with a remarkable history. We were luck to share some time with Jared, and to hear his story.

Where did the artillery piece come from?

What is its known history? 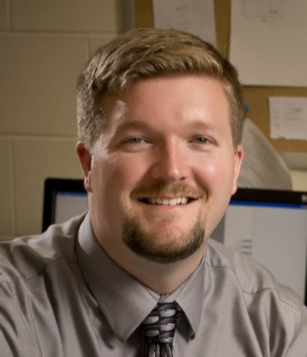 Jared ShankI’m still actively researching this. The common consensus seems to be that is was donated by the local American Legion Post (Keith Cretors Post 148). However, I have not been able to 100% confirm that. More than a decade ago that Legion post went defunct and I haven’t been able to find any historical records of their events. I have been talking to local historians and searching local newspapers for anything that mentioned this cannon, but have turned up very little. My most accurate guess is that it was placed on display sometime between 1922 and 1930. I’ve narrowed it down to those dates based on conversations with locals.

How did it come to you?

The village of Saint Paris has a Facebook page that I follow. At the beginning of the year (2019) they posted about the cannon and its poor condition since it’s been in storage for numerous years and what ideas residents had. They also cited that as a village with a small budget, funds to restore this cannon were non-existent. A high school classmate of mine is on the village council so I started a conversation with him informing him that I was interested in restoring the cannon so that it could be returned to its place amongst the war memorial in town. I also said I would take on the project at no-cost to the village, but might do some fundraising activities.

What research on it did you do?

I have done extensive research on this particular model cannon. It is known most commonly as the Bethlehem Steel 37mm Cannon. Its official designation is the “37mm US Gun (Bethlehem) Model 1 Carriage Mark A Semi-Automatic”. However, it never became a “mainstream” artillery piece and thus printed materials about it are severely lacking.

What did you learn about these weapons, in general, and about this one in particular?

This particular model cannon was designed and produced by the Bethlehem Steel Company in Pennsylvania for the French. In 1916 the French government ordered 200 of these guns to be produced. France designated the cannon the “Canon de 37mm, S.A. Bethlehem”, the “S.A.” meaning semi-automatic. 15 of the cannons were shipped to France for initial testing. In initial testing it did not perform well against bunkers or armored vehicles and was reject by France for main battle use. Most research states this cannon was never used in combat. However, research into French government records shows that once the cannons arrived and were tested they were used in “Defense Sections against Tanks”. Artillery used in these sections appears to have been largely outdated and ineffective pieces truly meant to be a last line of defense. In the French documents I found a picture of German soldiers who captured one of these cannons in 1918.

Once the US entered the war in 1917 we cancelled France’s contract with the Bethlehem Steel Company and confiscated the remaining cannons. They were tested at Bethlehem Steel’s own proving grounds and General Pershing rejected the cannon for use in Europe and the US Ordnance Corps rejected its use in the Army. After the tests, it appears the cannons were only used for training in the regular army until 1920. Sometime between 1920 and 1921 the cannons were sent to National Guard units for training and records seem to indicate they “disappeared” by 1922.

I am currently researching the serial number off of the particular cannon I am restoring, but as of yet have been unsuccessful in finding any specific information.

Why did you decide to restore it?

I decided to restore this cannon for many reasons, but mainly because it was the right thing to do. I grew up outside of Saint Paris, but often visited my grandparents who lived in town and I distinctly remember playing on this cannon as a child. My grandfather, a World War Two veteran, would often tell stories of his uncle who served in the Great War and suffered from the effects of mustard gas until his early death in 1930. So when I look at the cannon I not only see its history, but I remember fondly time spent with family growing up and learning about military service.

What is your background?

I myself am an Army field artillery veteran. I served in Afghanistan with the 3rd battalion 319th Airborne Field Artillery Regiment of the 82nd Airborne Division. I spent much time performing maintenance and cleaning on 105mm and 155mm howitzers. I also have some training in preserving objects for museums and displays so it seemed my background was a good fit for this work.

What skills is it requiring from you?

This project requires a great many skills. Most notably, the ability to research. I had to conduct research not only in the background of this model cannon, but also had to research museums and locations that have the same cannon to determine what pieces and parts are original and what has been replaced. I also had to research wheelwrights to find a shop that could reconstruct an extra replica of the wheels. I’ve also had to find a skilled welder who can fix a few broken pieces and hairline cracks that are forming in the protective shield on the cannon. This project also requires a large amount of labor in removing paint and rust and metal preparation for future preservation.

This is a highly personal effort. How does this cannon fit into your life?

I have to make it fit into my life. I have two sons, a 3 year old and a 1 year old. I also have a full time job. So I have to wait until my sons go to bed for the evening to be able to get time to work on this project. I am burning the candle at both ends, but it will be worth it to see this cannon restored and back on display.

What do your family and friends say/think?

My family and friends think it’s a really neat project. Not too many people can say there is a WW1 cannon in their garage. My 3 year old son also enjoys yelling out “cannon” when he sees it and starts to play on it.

My family, notably my wife Robin, has helped simply by allowing me extra time to work on this while she handles my two sons. That effort cannot be understated! Also, my brother helped me move the cannon via trailer to my home.

What are you taking from this experience?

I am taking away an appreciation for all historical objects, cannons, etc. that are part of outdoor displays. It’s easy to take those items for granted until you know the work involved to get them in a condition for display. Also, I understand how important it is to readily monitor those objects on display so that minor problems can be remedied quickly instead of waiting for them to grow into much larger issues.

What has it taught you about the original men who brought this piece to war?

As an artillery combat veteran myself, when I sit down on this cannon and look down the sights, I feel a direct personal connection to our Doughboys and French allies who used this model cannon. I can picture the cannon crew doing their drills and practicing shifting the trails back and forth to follow moving targets. I can picture the gunner and loader loading and firing. I can also appreciate the relative simplicity of this cannon and yet it was a fairly cutting edge design for 1916.

What has surprised you about what you have learned?

The biggest surprise for me has honestly been the lack of formal information about this cannon. I just assumed it would be somewhat easily to find a manual for it or other printed materials. However, it took long hours of research to assemble all of the materials I have found. Once I have completed this and documented all of the pieces and part numbers, I plan to write at least a short history and parts manual that could be used by anyone else to help restore this model cannon. I believe I have found approximately 25 other examples of this model cannon in various museums and displays around the country. Hopefully my work can assist others in the future. 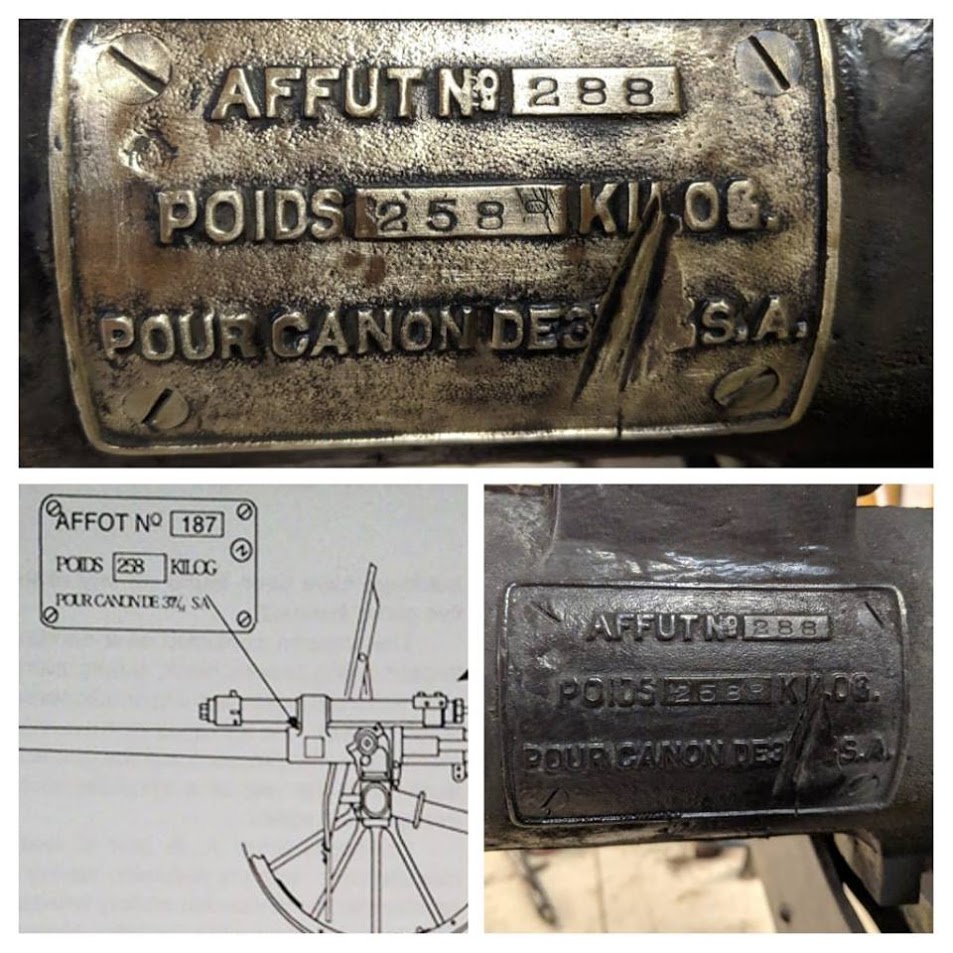 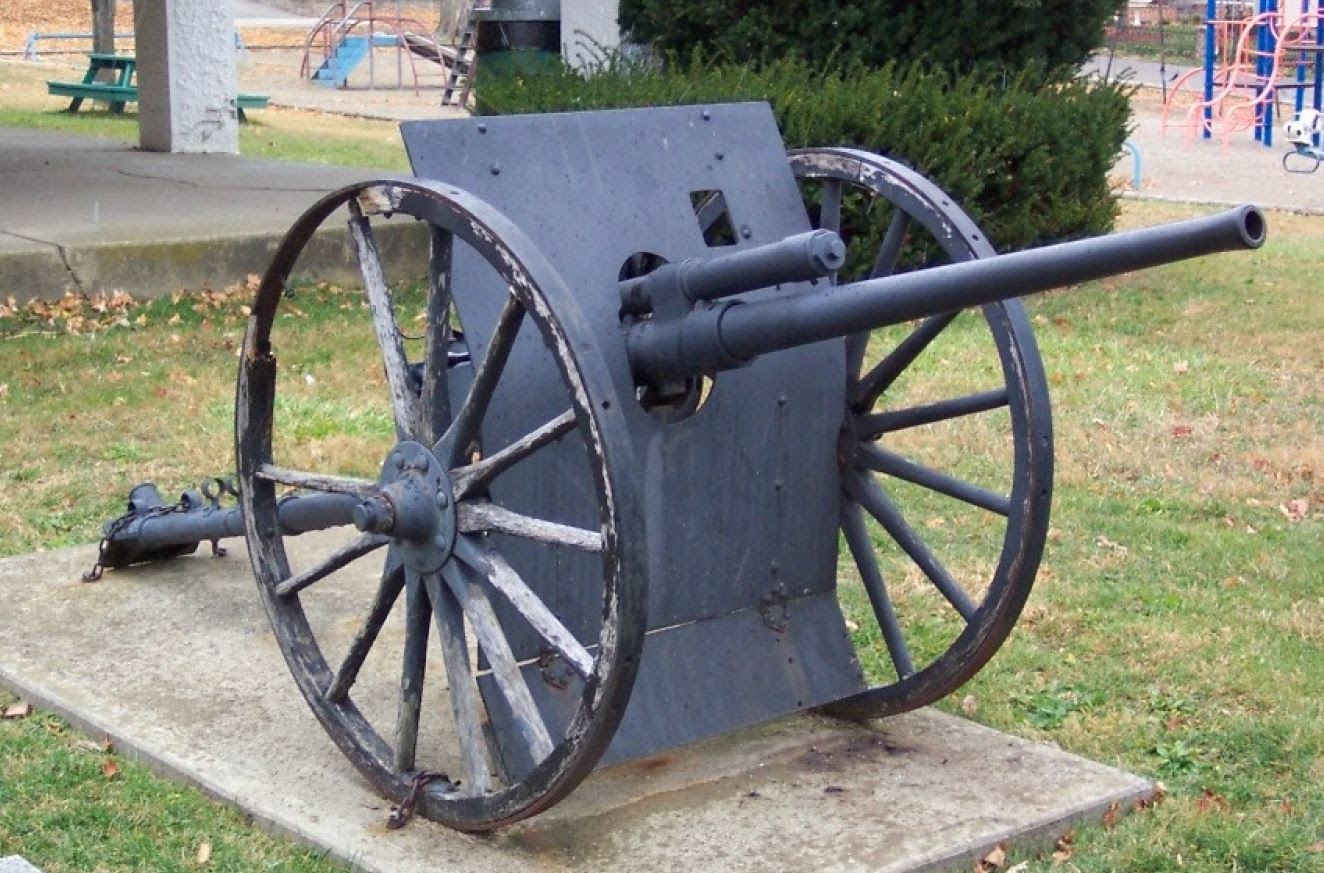 This picture from 2008 is the last known picture of the cannon on display in St. Paris, Ohio before the wheels collapsed and the cannon was removed. 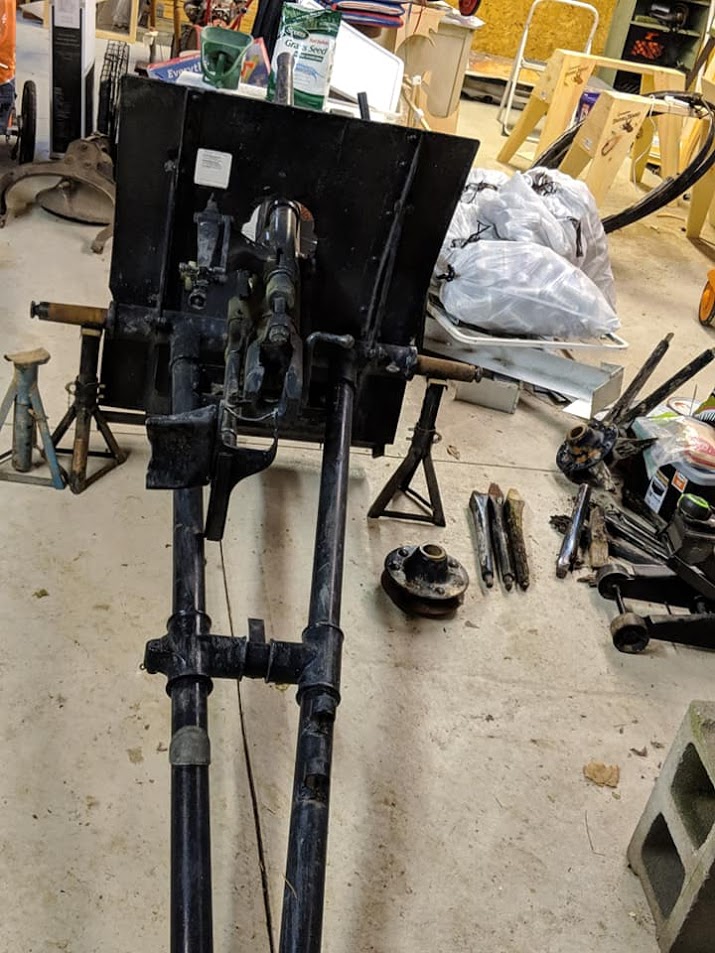 Rear of cannon in workshop where restoration is underway. 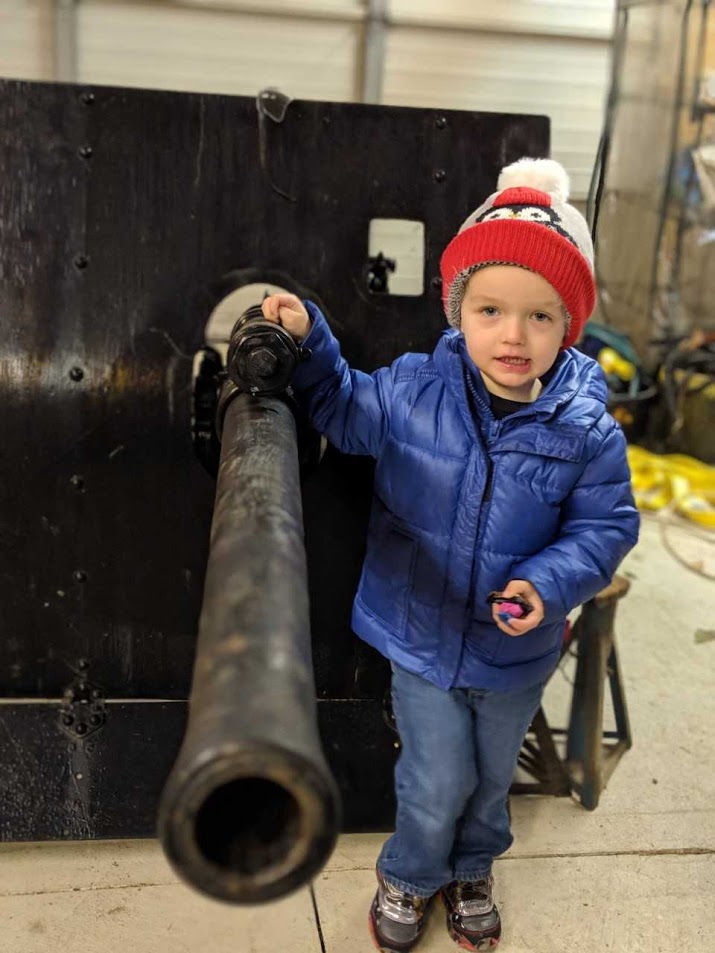 Shank's 3 year old son John getting an early start on the restoration craft with the WWI cannon.