In April 5th's edition of the World War I Centennial News Podcast, Episode 117, we aired a brief sound bite from the Yale Daily News introducing Helen Hagan, the first female, African American graduate of Yale's music school, and someone whose story is intertwined with World War I. Then, writer Elizabeth Foxwell joined the show to elaborate on the life of this talented and extraordinary person. The following is a transcript of the interview, edited for clarity:

Theo Mayer: Okay, it really is time to fast forward into the present with World War I Centennial News Now. As our regular listeners know, this part of the podcast is about now, and how World War I is being remembered, commemorated, written about, discussed, taught, and learned, and here is where we continue to spotlight the surprisingly numerous and significant remembrance and commemoration activities surrounding World War I and World War I themes. On Yale University's website called 'Yale News', there is a video published about a remarkable woman named Helen Hagen. The voices you're going to hear are those of Robert Blocker, the Dean of Music, and Lucy Kaplan, a graduate student in American and African American Studies. 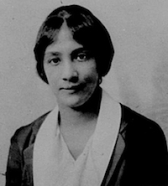 Helen Hagan, composer and performer, 1919.Robert Blocker: Helen Hagan was one of the most remarkable people who attended Yale early in the 1900s, and went on to a distinguished career. What made this so remarkable, at that time, is you have a young woman who is African American, who is female, who is coming to Yale University which, at the time, was an all male institution. She came to the Yale School of Music and graduated in 1912, she was piano major here, she was a composer. She composed a concerto while she was here and she played with the New Haven Symphony.

Lucy Kaplan: Unfortunately, most of her music today has been lost, but I'm hoping that it's somewhere out there and we just haven't found it yet, that it's not actually lost forever, but the piano concerto does survive.

Robert Blocker: Helen Hagan went quickly and proudly to serve her nation as an entertainer in World War I. She went to France, and she played for the African American troops who were stationed in that theater. That was a time when troops heard all types of music, popular music, classical music, religious music. And clearly, she was talented enough to be an important figure in that regard.

Lucy Kaplan: When we think of that time, we often think of ragtime, the blues, but we rarely think of classical music. But, actually, she shows us that there's this whole other side to African American musical history.

Robert Blocker: It was Elizabeth Foxwell's book, In Their Own Words: American Women in World War I, that brought Helen Hagen back to life for us.

Theo Mayer: Well we're fortunate to have Elizabeth Foxwell with us today to talk about Helen Hagen and her remarkable story. Elizabeth, it's great to have you back on the show.

Elizabeth F.: Thank you, Theo, it's nice to be back.

Theo Mayer: So, Elizabeth, I understand that while you were researching your book, In Their Own Words: American Women in World War I, you came across this story. For our listeners who may not have caught your interview with us last month, can you give us a quick reprise of the book?

Elizabeth F.: Yes, my book is a collection of first person accounts by US women in the war, and I discovered Helen Hagen while I was researching it. Although I didn't find a first person account by Hagen, I found enough details about her World War I experiences, and her life and work for a blog post. 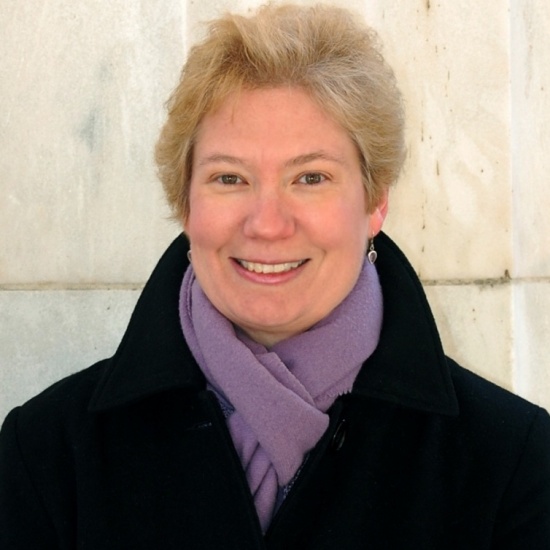 Elizabeth F.: Yes, that's true that she is the first black, female graduate of the Yale School of Music; that occurred in 1912. And it's also thought, at Yale, that she may have been the first black female graduate of Yale in its entirety. The published reactions to her playing that I've read, the reviews, seem to indicate that she just blew the doors off of everyone with her talent. She was her church's organist before she was 12 years old, and she earned a prestigious fellowship to study in France after she graduated. So her achievements, her early promise seemed quite evident.

Theo Mayer: So she went off to France to entertain and support the troops? When did that happen?

Elizabeth F.: That occurred from winter to summer in 1919. She was the only black female musician to be sent to World War I France, and she was one of only 19 black women with the YMCA in France. She was a member of what was called 'The Proctor Party.' That was formed at the request of General Pershing to entertain the black troops, and it was headed by minister Henry Hugh Proctor; thus the name. And the third member of the group was Joshua Blanton, he was a Hampton graduate who taught negro spirituals to the servicemen. Blanton places the number of troops that they entertained at nearly 300,000, Proctor places it at 100,000; so it's somewhere between 100,000 and 300,000.

Henry Hugh Proctor wrote about Helen Hagen and talking about the effect of her on the servicemen. He said, "The change was still greater when Miss Hagen would appear and play upon the piano. In many cases they had not seen a woman of their own race since they left home. And, frequently, tears would swell up in the eyes of these men as they looked upon this talented woman." And she was dubbed by the Pittsburgh Courier 'The darling of the Doughboys." And it really should be noted, Theo, that to go to France, she had to put her promising concert career on hold, and the income that went with it. 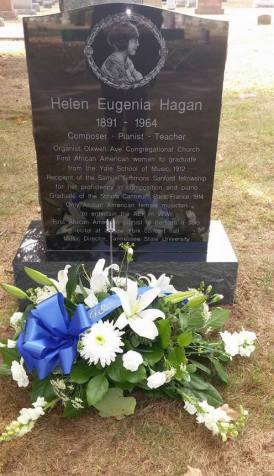 Through Foxwell's efforts, enough money was raised to mark Helen Hagan's grave in New Haven, CT.Theo Mayer: You know we've had a lot of researchers and genealogists on the show who, for a lack of a better term, wind up adopting their subject; it gets really personal. And that happened with you and Helen too, what's that story?

Elizabeth F.: Yes, I think adopt is a really good word for that. When I was doing research on Hagan, I was absolutely stunned to learn that she has been in an unmarked grave at Evergreen Cemetery in New Haven since her death in 1964. Now this was someone who was the first black pianists to perform a solo recital in a New York concert venue; that was 1921. She had met Saint-Saëns and Debussy, she had faculty positions at what is now Tennessee State University and Bishop College in Texas, and she had long experience as a teacher and performer. So I was just so stunned and I felt it was so important to recognize her contributions that I started a crowdfunding campaign to raise money for a grave marker, and it was so heartwarming how people across the country responded. And these were classical music fans, they were New Haven residents, or they were just simply people who felt she deserved a proper monument to her life and work.

Theo Mayer: Well Helen Hagan seems so completely remarkable. Why do you think she faded into obscurity?

Elizabeth F.: Well, I think, even though she is credited with composing songs, pianoforte pieces, violin and piano sonatas and stringed quartets, we only have one extant work and that is her Piano Concerto and C minor and we only have a fragment of that, which she composed and performed while she was at Yale. And she was unable to sustain a concert career, which is what she also wrote to W. E. B. Du Bois in 1932. I'm not sure whether it was The Depression or racism; that's kind of uncertain.

There is an indication that she recorded Samuel Coleridge-Taylor's Bamboula, on the black-owned Black Swan Records, but I haven't been able to find a copy of the recording yet. I really think if that we had had more of her work in the marketplace, we might be studying her like Florence Price or Scott Joplin.

Elizabeth F.: Well, when I launched the crowdfunding campaign, Ed Stannard of the New Haven Register interviewed me. Lucy Kaplan, who you mentioned at the top, is writing her dissertation at Yale on early African American composers; and so she talked it up at Yale. And then these pieces were followed by pieces in the Yale Daily News and the Yale School of Music, and it sort of snowballed from there. Hagan's story resonated with New Haven Mayor, Toni Harp, who's a black woman. And she spoke at the grave marker dedication ceremony, and even mentioned Hagan in her State of the City address.

Theo Mayer: It's not only a pleasure having you back on the show, but I think it's so wonderful that Helen popped out of your research to become such a personal friend. And, really, your shedding light on your friend's story has stimulated a lot of others to take a deeper look at World War I. Thank you.

Theo Mayer: Elizabeth Foxwell is the editor of a collection of first person accounts of US women in the war called, In Their Own Words, American Women in World War I. We have links for you in the podcast notes to her blog where the story came to light, her book, and the Yale University article and video.