In April 26th's edition of the World War I Centennial News Podcast, Episode 120, host Theo Mayer spoke with Joe Weishaar, the lead designer of the National Memorial in Washington, D.C. Joe has been dedicated to bringing the memorial to fruition for nearly four years, from the design competition up through the present day. In the interview, Joe catches us up on the status of the memorial as it goes through both the design and regulatory processes. The following is a transcript of the interview, edited for clarity:

Theo Mayer: For a century in the making, on April 18, 2019, it was a big week for a national World War I memorial in Washington, DC. The memorial team's development of the project was once again going before the very important Commission of Fine Arts, Washington's CFA, for a review of design updates and developments. This is all part of the rigorous process for creating a memorial in the nation's capital. Everybody on the team was very excited about the refinements and the detailed developments that they were bringing forth, but they were also collectively nervous. This is crunch time. To tell us what happened and how it went is the man whose vision and design for the overall memorial was selected in an international design competition that kicked all this off. Joe Weishaar, the lead designer for the national World War I memorial in Washington, DC. Joe, welcome back to the show. 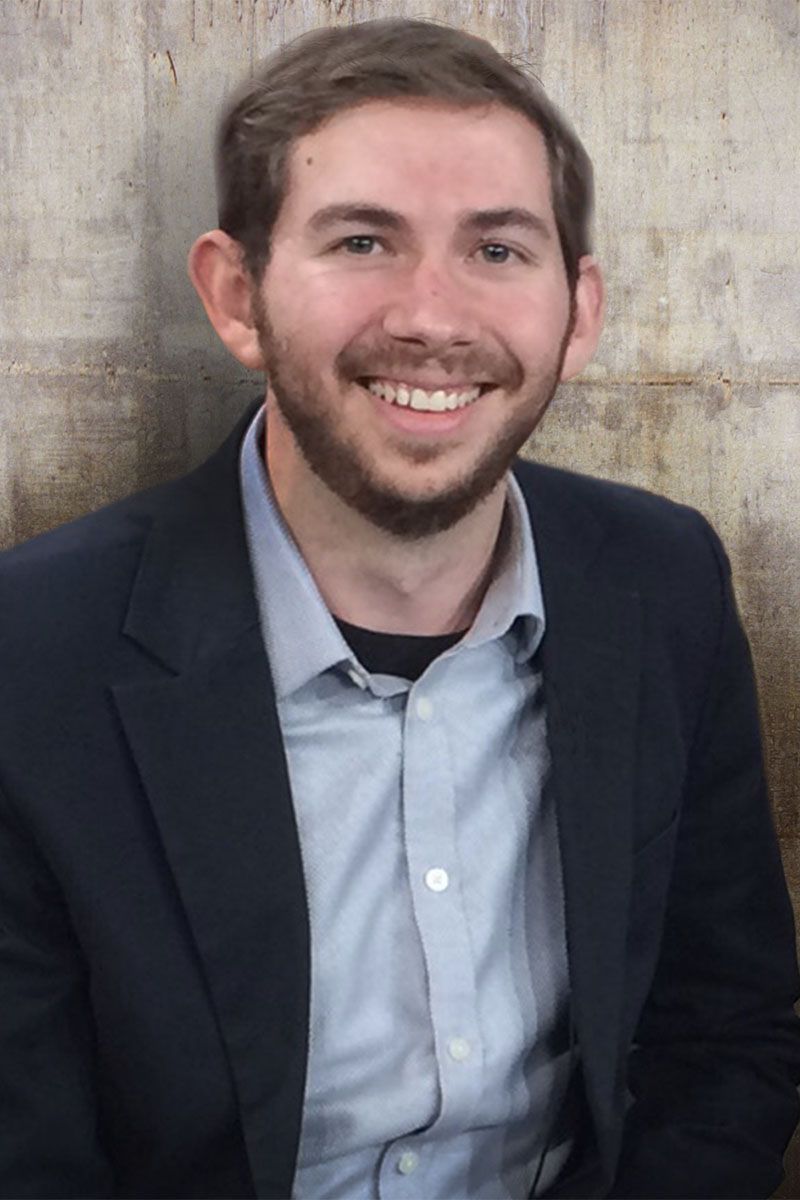 Joe Weishaar is the lead designer of the National WWI Memorial.Joe Weishaar: Thanks for having me, Theo.

Theo Mayer: Well, Joe, you've been on the podcast before several times, but our audience just keeps growing and growing, so for our new listeners, how old were you when you entered the design competition and what happened?

Joe Weishaar: I was 25 at the time. I'm 29 now, and coming up very close on four years in June, so I'm sure looking forward to that anniversary. By then, we'll be really close to being done with the design, actually.

Theo Mayer: How many people are on the whole team, if you were to add up everybody who's sort of working on the designs and the details and the lighting and the construction development, all that stuff. About how big of a team do you think that is?

Theo Mayer: Well, I would venture to guess that you probably had no idea of what you were getting yourself into, and that in the last four years you've probably grown and experienced a couple of decades.

Joe Weishaar: I had no idea what I was getting into, and yes, absolutely. The experience has been eye opening but also wonderful at the same time. 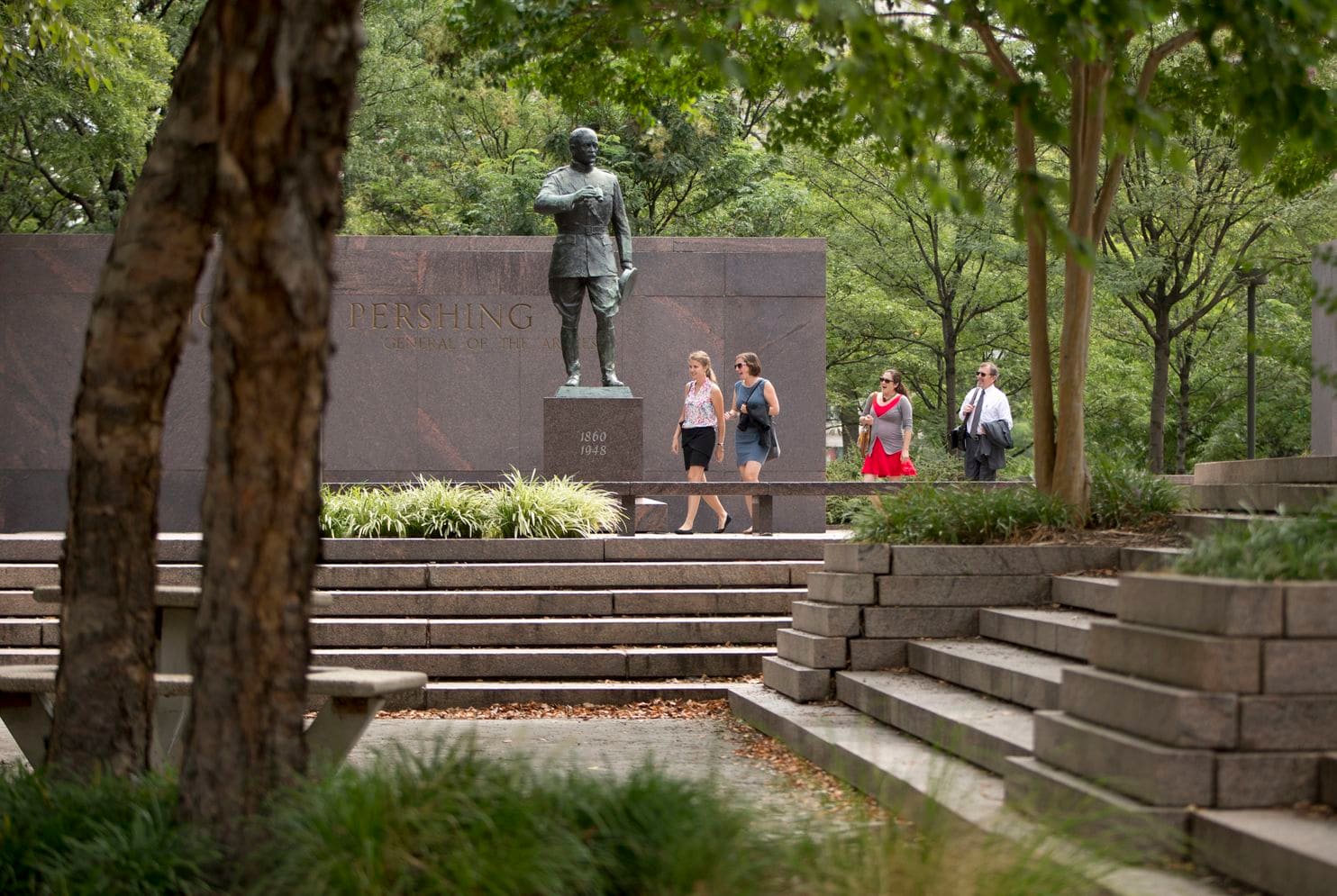 Pershing Park in Washington, D.C. The Commission is seeking to get its design for a national memorial here approved by the Commission of Fine Arts. Theo Mayer: I've been watching it from afar and it's a remarkable experience. Well, let's talk about the April 18 event. What was the team's mission for the CFA presentation, and what were you bringing to them?

Joe Weishaar: Sure, so this meeting in particular, we were bringing back to them two really critical pieces of the design, the overall sort of lighting strategy and detailing for the park memorial, and a little bit of a trickier issue, which was establishing sort of the final dimension of the sculpture. We've brought both of those elements to them before, but this time with the sculpture, we were in a little bit of a conundrum. We had gotten a previously approved size and scale, both the bronze element and the future height, but this time when Sabin went back through and sculpted the new maquette, the proportions changed ever so slightly in his refinement. I think the change was about 1.7%, which was oddly small, but it made a big difference when you're talking about a sculpture that's 58 feet long. So what we previously brought to them was a sculpture that was 56 and a half feet long. It had six foot, six inch on average figures. In Sabin's resculpting, we could either bring them and have approved a six foot six figure, but the sculpture would need to become 58 and a half feet long instead of 56 and a half. Or we could keep the length the same and the figures would have to get smaller. They would have to go down to about six foot two. So the design team in the World War I commission, we've been very concerned since the beginning. You don't want to make figures that are too small. We want them to be slightly a larger than life size, otherwise they just start to look diminutive. So it was our goal that we would get the larger figures approved and get sort of that additional length, because getting that approved really is the go ahead for Sabin to start sculpting. So it was really a big meeting for him and we're just thrilled with the outcome, that they approved that decision. 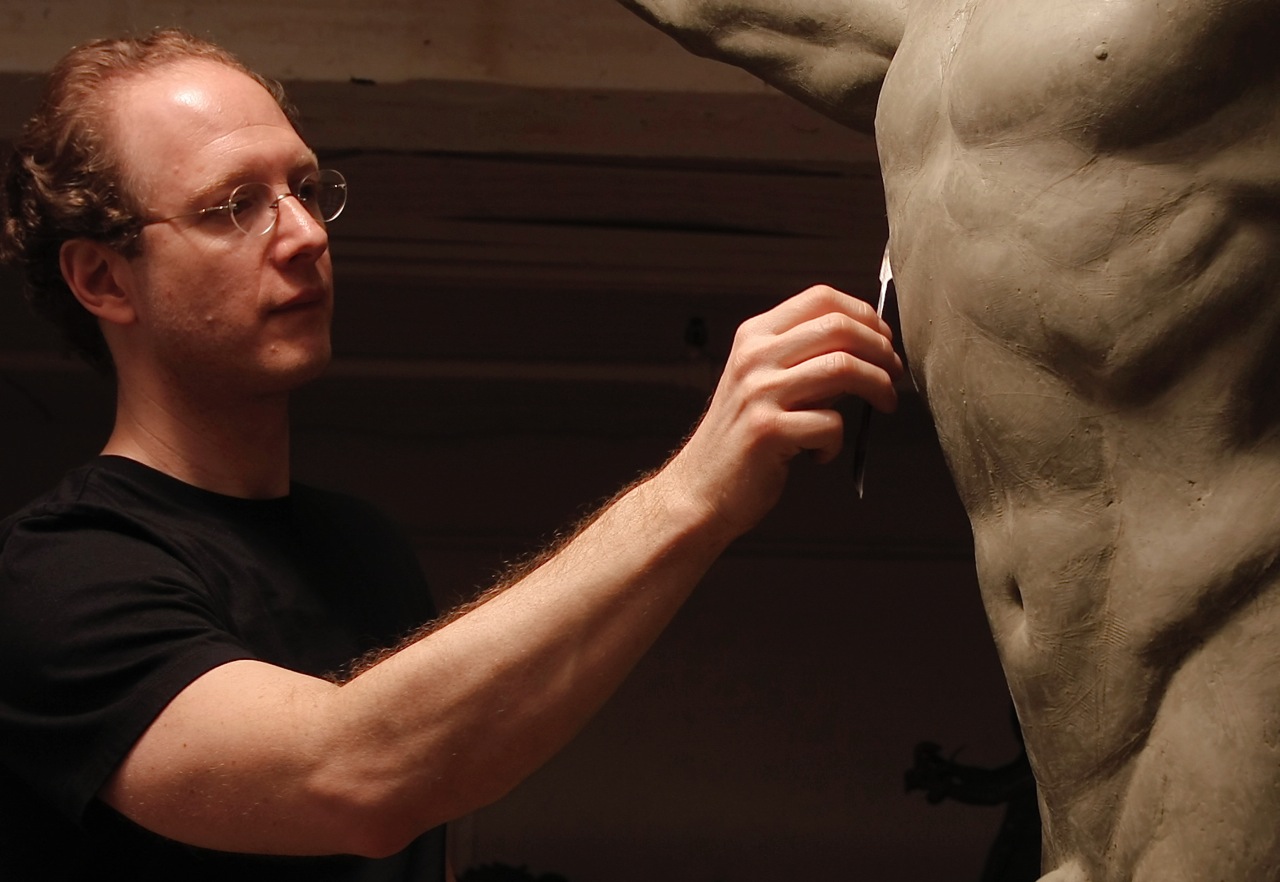 Joe works closely with Sabin Howard, the head sculptor for the national memorial.Theo Mayer: So they approved the longer length, which allowed you to go larger than life, so that the impact is more powerful. Is that what happened?

Joe Weishaar: Exactly, and you have to remember that these figures, even though they're larger than life, they're not huge. So it's a weird piece of sculpture that I don't think any of us had really considered before. I mean, Sabin knows it, but bringing everybody else along and trying to convince them that when you move the sculptures outdoors, they just start to look smaller and smaller. We didn't want to lose that impact.

Theo Mayer: Well, and you don't want it to be ordinary.

Theo Mayer: You brought a whole bunch of other design details for the park to the commission, including the lighting. Tell us about that.

Joe Weishaar: Yeah, so the lighting is really a tricky thing to convey in a meeting, and it's sort of unfortunate that there aren't great tools out in the world to describe light, unless you actually get to bring them to the meeting and turn them on and sort of shine them around the room, which you can't really do when you have theoretical design. So we did as many different studies as we possibly could and took as many pictures of the park at night with existing light. We had a new, rendered fly through of the final memorial, of the design with all of the lighting in place. Then we showed a series of we call sort of heat maps that are really planned diagrams for the park that show the light source and how the light source spreads throughout, just to try to get people to understand what it's going to be like. But it is a very difficult thing to explain. 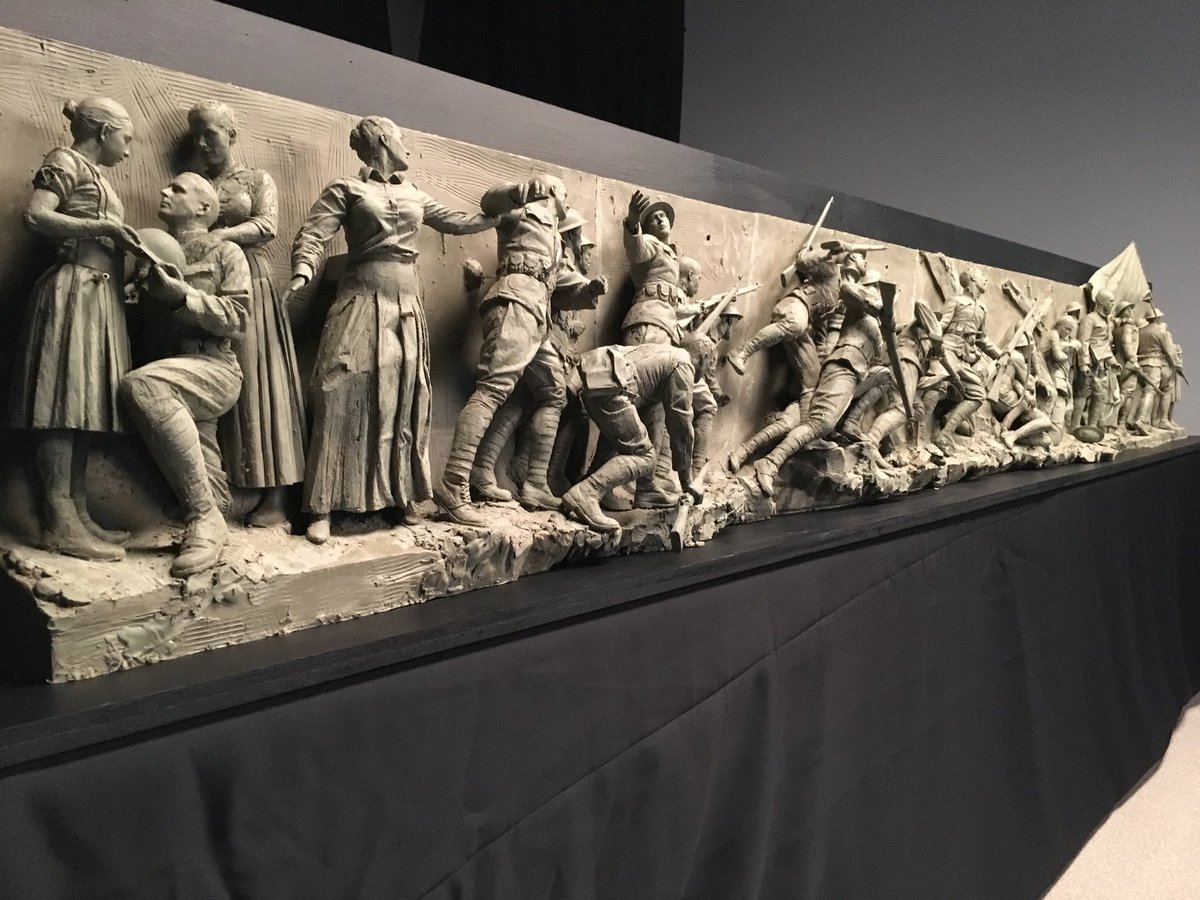 The National Memorial maquette.Theo Mayer: Well now you made a movie, right? And I heard that when you rolled the video of the nighttime look for the memorial audience, there was a gasp in the room.

Joe Weishaar: Yeah, it was probably the thing that helped us the most, just because people understand the drawings, but not necessarily the impact of what we're proposing and that what our lighting designers are showing them actually works. So having that video really captured everybody's attention and sort of imagination. I'm pretty convinced that is that this is going to be a memorial to go see at night. The design of the lighting is just flawless, and it'll really be spectacular.

Theo Mayer: As this design is evolving, Joe, and as it's coming together and you guys are really down to details and simulating details, is it kind of taking on a life of its own for you?

Joe Weishaar: It is. In a lot of ways, it's so much more than I thought it was going to be at the start of this. I've been through the design process before, and I know that when you get close to the end, it seems like every detail now that we draw has to have five others and more conversations, but that part makes it even more exciting and more fun to be a part of.

Theo Mayer: Well, you guys get to live in the memorial every day. Joe, just really quickly in closing, the team's getting really close to completed final approvals on everything. How does that play out?

Joe Weishaar: It's interesting. So we're probably about two meetings away from the end at this point, so we've got another meeting to discuss the park signage, text selections, really nit picky details about fonts and things like that. Then we'll have one more probably in June in which we just go back through the last three years of meetings and pick up any last loose ends that were hanging out there. Then hopefully by that point, we'll have final approval on the design.

Theo Mayer: There's a couple of other regulatory agencies that also have to sign off, but they've been pretty much going along with what the CFA is doing, haven't they?

Joe Weishaar: They have been. When the CFA makes the determination, they're in the room. We've already met with their staff members, so we know it's sort of a go-ahead.

Theo Mayer: Well, Joe, thank you. It's always great to get caught up on this, and appreciate you coming in.

Theo Mayer: Joe Weishaar, the lead designer for the national World War I Memorial in Washington DC. Coming up in a week or two, we're going to bring on the lead fundraiser for the project to tell us about how the most crucial part of the project is coming along. Go to ww1cc.org/memorial, all lower case, to see the new fly through video, including how the memorial's going to look at night. It's really awesome. And of course, the link is in the podcast notes.