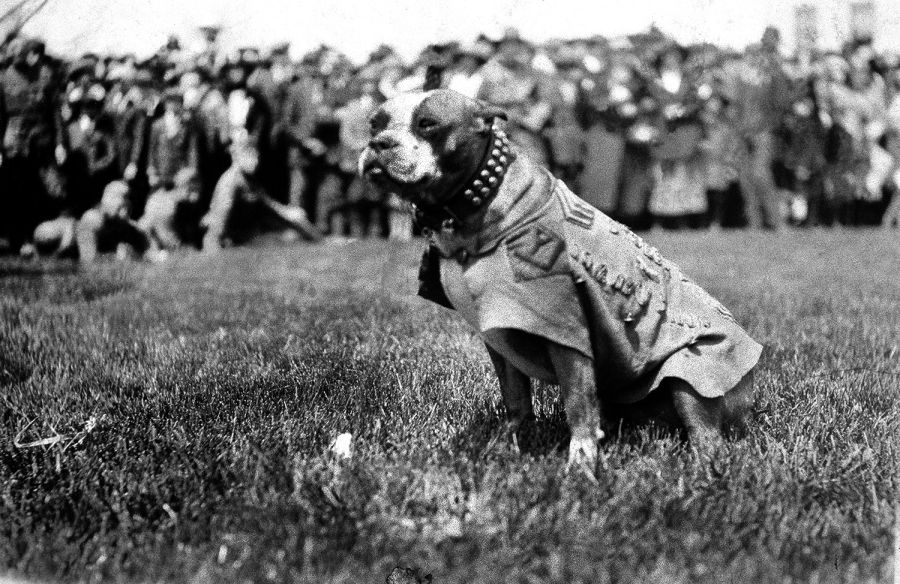 Sergeant Stubby, a short brindle bull terrier mutt, was officially decorated a hero of World War I. Regarded as the greatest war dog in the nation's history, he earned one wound stripe and three service stripes.

By Shaye Weaver
via the Stars and Stripes newspaper web site

NEW YORK (Tribune News Service) — He was the "goodest boy" of them all. As one of the first U.S. Army service dogs, bull terrier mix Sgt. Stubby endured mustard gas and shrapnel from grenades during his time in World War I France.

The long-treasured mascot's bravery and service will be honored with an unveiling of a bronze statue in his likeness at the AKC Museum of the Dog in Manhattan on May 23, where it will be housed permanently.

Stubby was on the front lines of 17 battles over the course of 18 months, warning his unit of chemical attacks – he had a specialty gas mask to fit over his little muzzle – and incoming artillery shells. He also helped find wounded soldiers and offered them comfort, and even captured a German spy by the seat of his pants in the Argonne — not letting go for anything. It was his role in nabbing the spy that earned him the rank of sergeant.

When Sgt. Stubby returned back from war, Gen. John J. Pershing awarded the four-legged fighter a medal for his bravery. The pooch even met three presidents, Wilson, Coolidge and Harding.

Stubby joined the Army somewhat by accident. In 1917, he wandered onto the camp of the 102nd Infantry Regiment of the 26th Yankee Division at Yale. A young soldier named Robert Conroy took a liking to him, named him "Stubby," and smuggled the dog onto his vessel in an overcoat when it was time to ship out.

Stubby essentially became the official mascot of the 102nd Infantry Regiment, with fans back in the States.