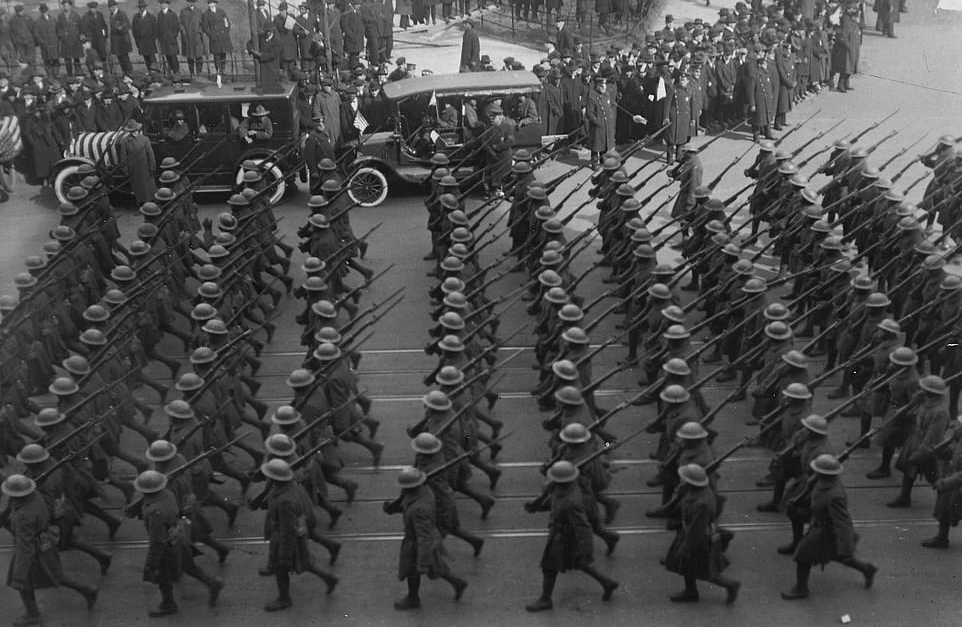 Dozens of Harlem Hellfighters parade on Fifth Avenue In New York City in full uniform and holding their rifles after returning home from the Great War in Europe. African-American recruits were told they would not be eligible to serve with the Marines when American joined the war effort in 1917. There were also very limited roles available for black men in the Navy.

Incredible images from the end of the First World War show brave African-American soldiers as they keep up morale in France – and the infamous Harlem Hellfighters as they return to New York after 191 days at war.

The remarkable shots, which were taken in around 1918, depict a proud father holding up eleven stars, one for each of his sons serving; a soldier entertaining his comrades in Orleans, France; and rapturous crowds welcoming the Harlem Hellfighters home.

The 369th United States Infantry regiment, known as the Harlem Hellfighters, arrived in France to provide support to their army’s 16th Division on the Western Front after the US joined the Great War in April 1917.

Recruited largely out of New York, the infamous, all-black unit spent more time in combat, 191 days, than any other American regiment in the war.

It earned a reputation from its German opponents as fearsome fighters, and was nicknamed the Harlem Hellfighters because the regiment ‘never lost a man through capture, lost a trench or a foot of ground to the enemy.’

The entire regiment received the Croix de Guerre medal for their ‘acts of heroism’ in France after it became the first American regiment to cross into Germany over the Rhine.