New York, NY — The American Kennel Club Museum of the Dog is pleased to announce that the official bronze statue of Sgt. Stubby, a distinguished World War I war dog will be housed permanently at the AKC Museum of the Dog. The sculpture will be unveiled on May 23, 2019. Commissioner Dr. Libby O'Connell of the United States World War I Centennial Commission will perform the unveiling. 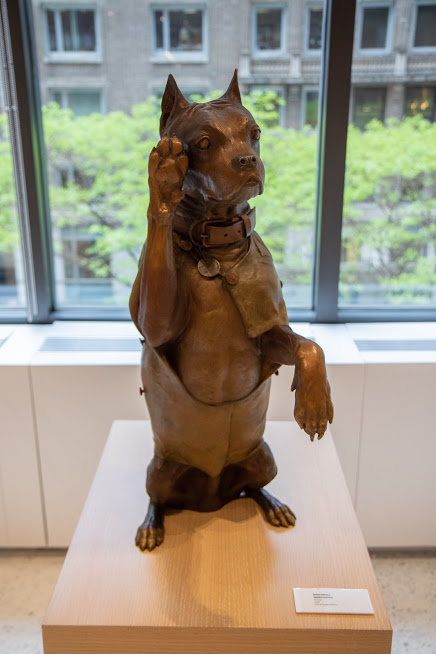 Photo courtesy Romie DeCosta/ American Kennel ClubThe statue, “Stubby Salutes,” created by renowned sculptor Susan Bahary, is a life sized bronze of the bull terrier mix. Stubby is widely regarded as the U.S Army’s first service dog. His service began in 1917 when he wandered on to the camp of the 102nd Infantry Regiment of the 26th Yankee Division at Yale. He formed a bond with a young solider named Robert Conroy who named him “Stubby.”

Conroy subsequently smuggled Stubby on his ship when it was time to ship out. Stubby served in France for 18 months and a total of 17 battles. His heroic feats included: warning his unit of looming mustard gas attacks, locating wounded soldiers on the battlefield and sitting beside them until help arrived, and capturing a German spy by grabbing at the seat of his pants. Over the course of his service, he was injured by mustard gas and a grenade.

Stubby is remembered for his bravery and also as a treasured mascot who brought joy to embattled soldiers. As a veteran, he was awarded a medal for his bravery by General John J. Pershing and met three presidents.

This April marked the 100th anniversary of Stubby’s return to the US to a hero’s welcome.

“We are very excited to welcome “Stubby Salutes” to our Museum collection,” said Alan Fausel, Executive Director of the AKC Museum of the Dog. “His courage and dedication to our country has laid the foundation for today’s military working dogs and we look forward to sharing him with the public and educating them about his place in history.”

Susan Bahary, an internationally acclaimed artist, was commissioned by the descendants of Robert Conroy to memorialize Stubby in his rare salute pose, a pose which won him the favor of his fellow soldiers and officers. Her other works include “Always Faithful,” the United States first official war dog monument that commemorated the 25 dogs who perished in the taking of Guam during World War II. “Always Faithful” is a part of the Museum of the Dog’s collection.

“It has been an honor to create this bronze monument to commemorate Sgt. Stubby,” says Bahary. "His right paw represents his deeds for our country and his left paw represents his friendly and giving nature. His contributions to our military, along with his loyalty and bravery are symbolic of all the wonderful working dogs that protect us and service animals that benefit and enrich our lives today.”

The original casting of the sculpture is on permanent display at the “Connecticut Trees of Honor” Memorial at the Veterans Memorial Park In Middletown, CT. The story on its dedication is here: https://www.worldwar1centennial.org/index.php/communicate/press-media/wwi-centennial-news/4562-monument-honoring-famous-wwi-war-dog-sgt-stubby-dedicated-in-ct.html

The AKC Museum of the Dog, founded in 1982, was originally housed in The New York Life Building located at 51 Madison Avenue as part of the AKC Headquarters. In 1987, the Museum was moved to West St. Louis County, MO. The Museum made its return to New York City in a new location in February 2019 and houses one of the largest repositories of canine art in the world, including paintings, porcelains, bronzes, trophies and digital displays. The Museum is dedicated to education and preservation of purebred dogs. 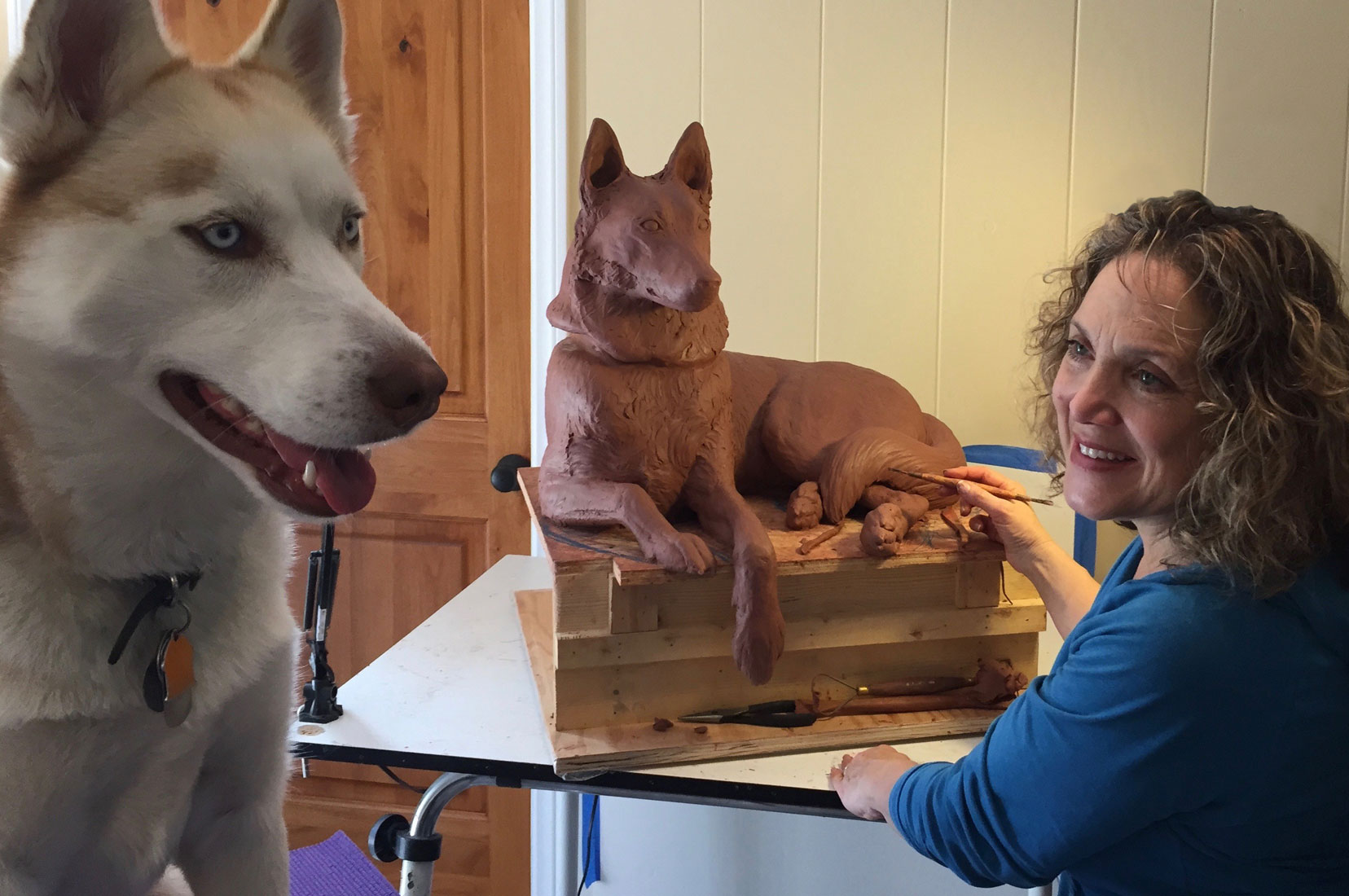 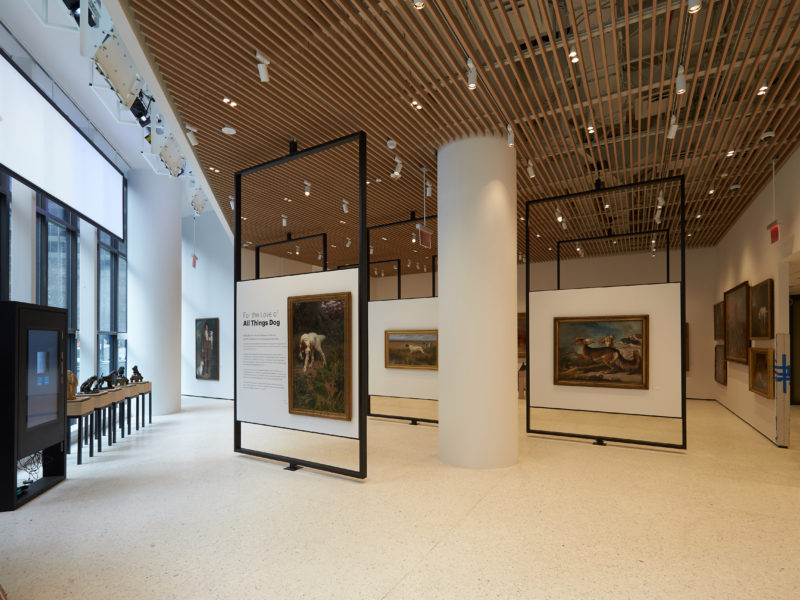 The AKC Museum of the Dog in NYC. 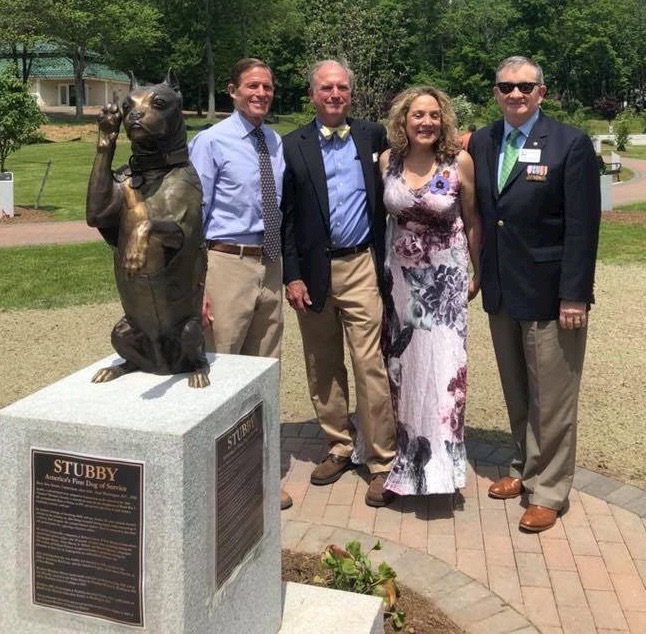 The dedication of the SGT Stubby Memorial in Middlesex CT. WW1CC Commissioner John Monahan is at right.