Harlem One Stop today announced a free special Memorial Day Weekend concert by The 369th Experience in celebration of the Harlem Renaissance Centennial and the Harlem Hell Fighters. The ensemble will perform a program of music by ragtime and early jazz bandleader James Reese Europe. The free outdoor performance will be presented from 7:00-8:30 p.m. on Saturday, May 25 at Marcus Garvey Park (Mt. Morris Park West between East 120th-124th Streets) in Harlem. 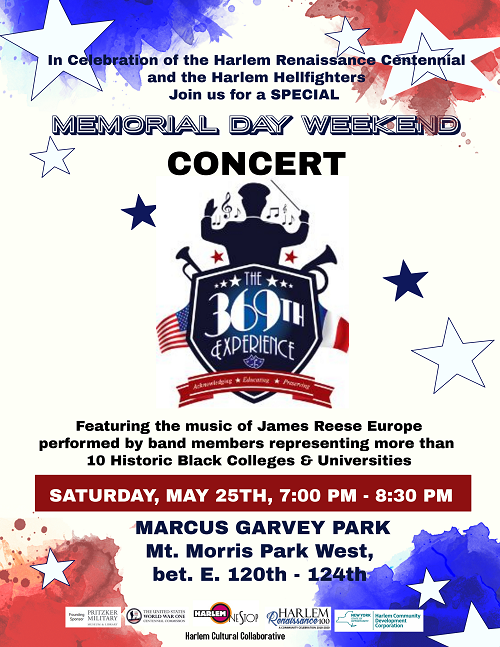 "Prior to his enlistment, Europe made history with his Clef Club Orchestra, which in 1910 became the first act to perform jazz at Carnegie Hall," says Harlem One Stop founder Yuien Chin, who organized the Memorial Day Weekend concert. "During his military service, his 369th Infantry Regiment band played for British, French, and American troops and civilian audiences in France, where these 'Harlem Hell Fighters' also made their first recordings."

"The students performing James Reese Europe's works today are carrying a grand legacy of Harlem creativity and patriotism and giving a new generation an opportunity to appreciate the original band's star power and sacrifice," Chin says. "Particularly in connection with Memorial Day, we are honored to have the opportunity to raise awareness of this amazing piece of Harlem's musical and civic history."

Harlem One Stop, a leading uptown destination marketing organization and tour operator, is the originator of the Harlem Renaissance 100 celebration, which is co-presented with Harlem Cultural Collaborative Partners. The Centennial launched in late 2018 and runs through 2020. For a full list of events and the most up-to-date information, visit http://harlemrenaissance.org/.