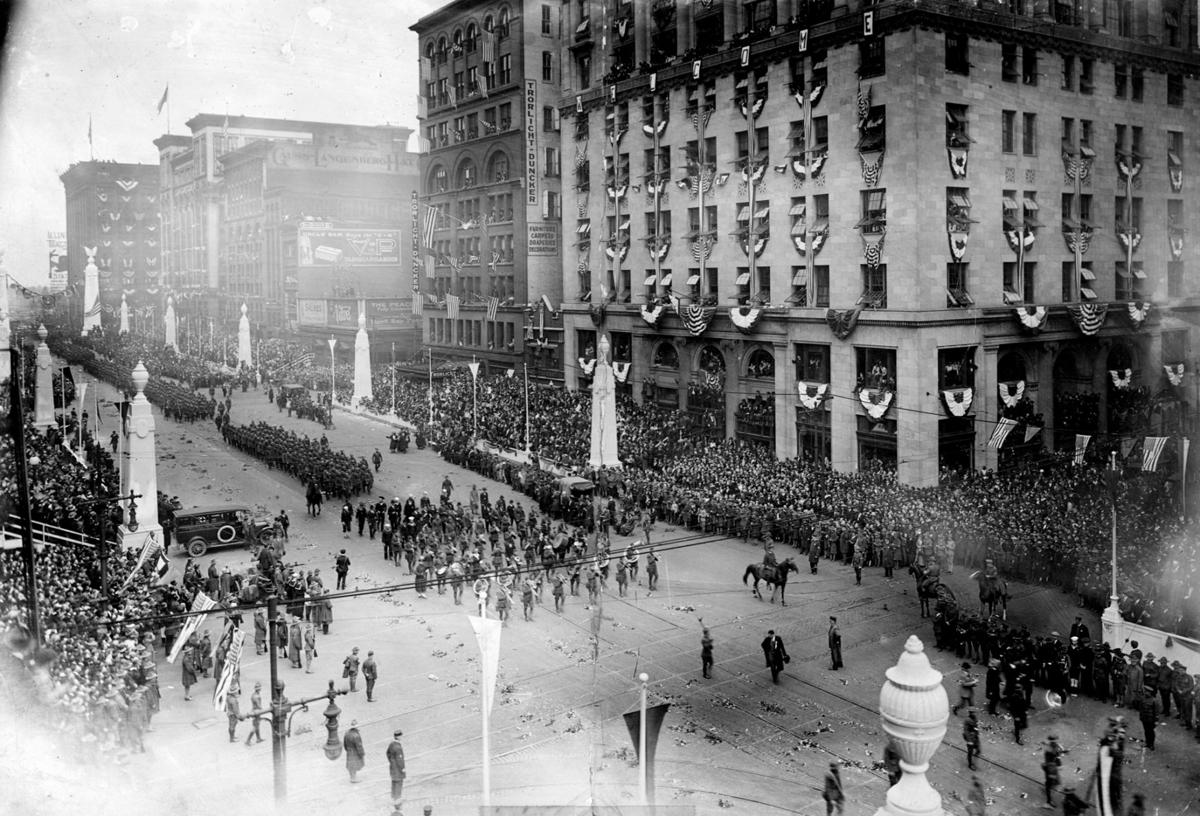 St. Louis' own 138th Infantry Regiment returns from World War I with a parade through the city on May 9, 1919. The formation is marching south on 12th Street (now Tucker Boulevard) at Olive Street. Just out of view to the left was the Shubert-Jefferson Theater in the Union Electric Co. building, where organizers of the American Legion were holding their first meeting in American on the same day. The city had erected the pillars to make 12th Street a "hall of honor" for veterans returning from the Great War. (Post-Dispatch)

100 years ago: St. Louis throws a homecoming party for the ages

ST. LOUIS — The Doughboys formed ranks in favor of "100 percent Americanism" and against the city of Chicago.

The veterans of World War I who created the American Legion first met on American soil in a theater downtown on May 8, 1919. The killing had ended six months before. They adopted a national constitution, promoted employment for veterans and cheered Col. Theodore Roosevelt Jr., a war hero and son of the late former president.

The 1,079 delegates gathered in the Shubert-Jefferson Theater of the Union Electric building, Olive and 12th streets. By happy coincidence, St. Louis also was hosting a raucous welcome home for the 138th Infantry Regiment. The unit had formed here and fought in the Argonne Forest in France in the last weeks of the war.

On May 9, the 138th's soldiers marched through cheering mobs and passed in front of the Shubert-Jefferson, which became a convenient reviewing stand for legion delegates who mingled with the crowds.

"What a handsome leader," a woman shouted to Sgt. Ross Koen as he led L Company down 12th (now Tucker Boulevard). Jimmie Dutton broke through the police line and hugged his marching big brother, W.B. Dutton. Choruses of church bells and locomotive whistles added to the racket.

The 138th had paid dearly for the honor — of 3,500 men who signed up, 230 were killed in combat. Accidents and wounds increased the casualty rate to almost 50 percent. The survivors stepped off trains at the Wabash station near Forest Park and marched downtown in formation with rifles, packs and helmets.